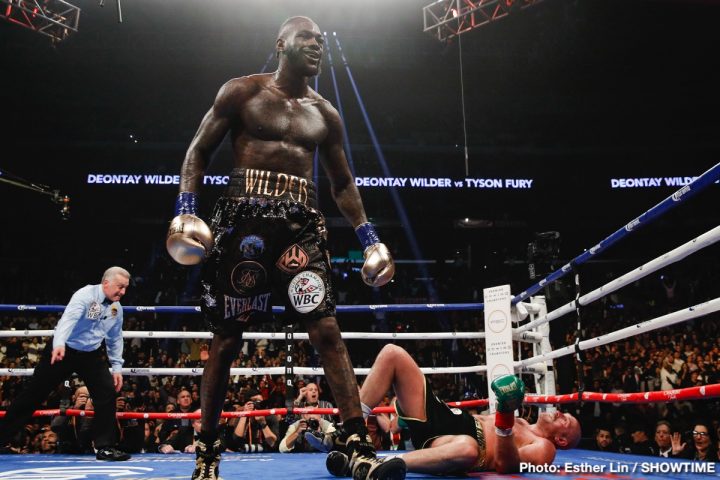 There was very little agreement in picking the winner of the Wilder-Fury fight. The official outcome of the fight by the three judges was a 12 round split draw. The scores were 115-111 for Wilder, 114-112 for Fury, and 113-113.

Most people agree that Fury (27-0-1, 19 KOs) was out-boxing Wilder with ease, and would have won the fight if he hadn’t gotten knocked down in rounds 9 and 12. Getting dropped twice was a bad look on Fury’s part, making it difficult for most of the fans to circle their wagons around him. Getting knocked down twice isn’t how a challenger beats a champion in this era of boxing.

“It probably could’ve been a draw, but if it had to go to somebody I would say Fury,” said former IBF/WBC welterweight champion Andre Berto to Fighthub.

It could have gone to Fury. He looked like he won more rounds than Wilder, but it appeared that Wilder won four rounds at least. With the two knockdowns, that makes it a draw. Wilder didn’t just win two rounds. To score it that way, you’d have to ignore rounds 1, 2, 3, 4 and 5. Wilder fought well enough to win all five of those rounds. Fury came on strong starting in the 6th round and appeared to win rounds 6, 7, 8, 10 and 11. Fury took too many heavy shots in the first five rounds, and then he was knocked down in the 9th and 12th.

It’s possible Wilder will improve and make adjustments for the rematch with Fury if there is one. Wilder seemed to have figured Fury out by the last quarter of the fight. Wilder realized that the only he was going to beat Fury is to load up on every shot, and be willing to miss a lot. Wilder had been missing throughout the fight, but he was tentative in the first eight rounds and not taking power off his shots in order to connect. Wilder was making the same mistake former IBF/IBO/WBA/WBO heavywight champion Wladimir Klitschko made against Fury in November 2015.

“I think the result of the fight was just,” said World Boxing Organization junior middleweight champion Jaime Munguia. “Fury won more rounds than Wilder, but Wilder evened it with the knockdowns. For me, it was a good fight and it would be a good rematch.”

Wilder getting those two knockdowns in the second half of the fight was the thing that made it difficult to give the fight to Fury. When a challenger gets knocked down twice, they end up losing most of the time. The fact that the judges gave Fury a draw is a compliment to him. Most of the time the judges don’t give a challenger a draw when he’s fighting in a foreign country and he’s been knocked down twice by a world champion. Fury, 30, might have been given a break due to his popularity and the fact that he’s a former unified champion. You can argue that it’s very rare though that a challenger can get a draw in foreign country when they’ve been knocked down twice by a world champion. Fury got a draw against Wilder, but he could have easily been given a loss if he wasn’t a popular fighter. That’s how boxing is.

“Wilder only had, like, two of the early rounds,” heavyweight contender Joe Joyce said. “Obviously he got the two knockdowns, which are 10-8 rounds, but it still didn’t add up to a draw. I thought Fury won.”

British heavyweight Joe Joyce (7-0, 7 KOs) is probably not the guy that one should be asking about the outcome of the Wilder vs. Fury fight. Joyce worked as a sparring partner for Fury during his training camp at Big Bear, California to help him prepare for the Wilder fight. It’s hard to see Joyce as being objective with his comments about the Wilder vs. Fury fight, as he’s obviously a friend of Tyson’s. If Wilder won two of the early rounds, and then won two later rounds with knockdowns, then that makes it a draw. The two knockdowns make up for what Wilder lost in losing more rounds. Fury won 8 rounds to 4, according to Joyce, but the knockdowns Wilder scored in rounds 9 and 12 would have evened the score, making it a draw.

“I saw the fight going Tyson Fury’s way,” former three division world champion Abner Mares said. “I don’t know how he got up…Any referee would have stopped it just by the way he went down,” Mares said about Fury being knocked down in round 12. “I still had Tyson Fury up. I thought he did enough to win the fight. I had him up by at least two rounds, for sure.”

It would have made a great comeback story if Fury had been given the victory, but he didn’t finish strong in the fight. Getting knocked down TWICE in the final four rounds isn’t finishing strong, and judges tend to score against the fighter that fails to finish strong. Fury got tired, and was sloppy enough leave openings for Wilder to land his big right hand, and that’s what he did. You’ve got to give Fury his props for getting back up from the knockdowns and pushing on to try and win. Going by the comments that Fury made after the fight, he thought he was easily winning the fight, and that caused him to ease his foot off the accelerator in the championship rounds. That was a mistake on Fury’s part. He might have concluded that Wilder was mentally done for the fight, and wasn’t going to put in a great effort in rounds nine through twelve to try win it. If that’s the belief that Fury had, it cost him the fight, as Wilder came on strong and hunted him down to drop him twice.

“Everybody in the building knew the right hand was coming and Deontay couldn’t land it unless Tyson got sloppy, which he did,” said trainer Abel Sanchez. 115-111 Tyson Fury.

Fury did get sloppy in the championship rounds against Wilder. Only Fury knows why he seemed to let up and start showboating when he should have been taking Wilder very seriously. It looked like Fury got tired. He’s lost so much weight since he started training for his comeback earlier this year, dropping down from 390 lbs to 256 lbs. Losing all that weight, and then forcing his body to move for 12 rounds against Wilder. It’s no surprise that Fury got a little sloppy in the last quarter of the fight with Wilder. If this wasn’t a huge puncher like Wilder, it wouldn’t have cost Fury. He could have clowned his opponent and played to the crowd for the last four rounds without worry. It was the wrong guy for Fury to be clowning with.