Adonis Stevenson out of induced coma 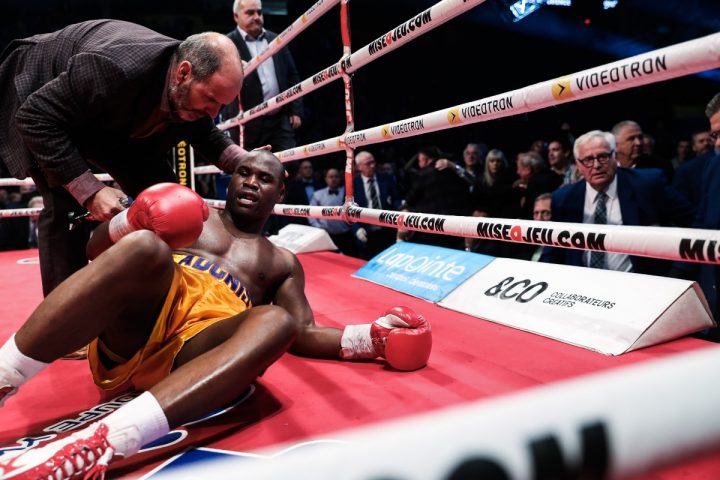 By Allan Fox: Adonis Stevenson has been brought out of his medically coma from his devastating 11th round knockout loss earlier this month to Oleksander Gvozdyk on December 1, according to a media statement from his girlfriend. The 41-year-old Stevenson had been in a coma ever since that fight. Stevenson was in critical condition after the fight with Gzodyk, and required brain surgery. At that point, Stevenson was put in a medically induced coma to allow his brain to recover from the surgery, and the injury from the fight.

Ever since Stevenson suffered the injury, there’s been massive concern from the boxing world about his situation. Fans want to see him pull through this. Until lat Saturday, there hadn’t been news updates on his situation. Fortunately for the fans, Stevenson’s girlfriend Simone ‘Sisi’ God gave an update on his situation, saying that he’s been brought out of the medically induced coma.

“Despite recent reports being leaked to media, I wanted to clarify that Adonis is awake,” Simone “Sisi” God said in a statement. “He is healing from his injury in the private company of his family and his dedicated medical team. Adonis is a world champion in the ring and is exhibiting that same grit, strength and determination in his recovery.”

Stevenson lost his WBC 175 pound title when he was knocked out in the eleventh round by interim WBC light heavyweight champion Gvozdyk on December 1 at the Videotron Centre in Quebec City, Quebec. It was expected to be a tough fight going in for Stevenson, with the odds-makers picking the 31-year-old Gvozdyk as the favorite to win. Stevenson outworked Gvozdyk through the first 10 rounds, and was ahead on the scorecards going into the 11th by the scores 98-92, 96-94 and 95-95. That’s when Gvozdyk suddenly opened up with a flurry of shots that hurt Stevenson, and put him down on the canvas. Referee Michael Griffin did the prudent thing in stopping the fight at once. After the bout had been stopped, Stevenson was taken to the Enfant-Jesus Hospital.

“On behalf of Adonis and our family, I wanted to take a minute to thank everyone who has taken the time to reach out, send prayers and post about Adonis’ injury,” God said. “We are so grateful for the out-pour of messages, gifts and support that have come our way. ‘Superman’ is a world champion and has demonstrated his strength in facing every obstacle he has ever faced. He is a legend in the eyes of his fans and a man that demonstrates to his family daily that inner strength and love can change and redeem even the greatest of hardships.”

Stevenson’s girlfriend didn’t go into details about his condition. There’s no word whether Stevenson is talking or moving.

After Stevenson’s fight with Gvozdyk, he was able to stand up after being knocked down in the 11th. However, he lost consciousness while being taken to the hospital in the ambulance, according to ESPN.

Going into the fight, the southpaw Stevenson was the longest reigning world champion in boxing, and he was making his incredible 10th defense of his WBC light heavyweight belt against Gvozdyk.