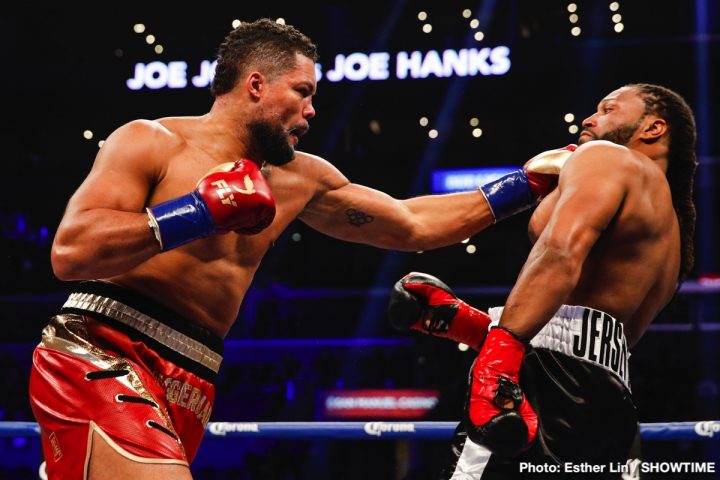 By Jeff Aranow: Joe Joyce crushed Joe Hanks in a 1st round knockout to his seventh pro fight last Saturday night in heavyweight action in Los Angeles on the Deontay Wilder vs. Tyson Fury card at the Staples Center. The 2016 Olympic super heavyweight silver medalist from Great Britain Joyce (7-0, 7 KOs) started out slowly, pumping out a stiff jab to the head of the powerfully built 35-year-old Hanks (23-3, 15 KOs). Moments later, the 6’6″ Joyce hurt Hanks with a right hand that staggered him. Joyce then followed with a left hand that knocked Hanks down. Referee Jerry Cantu then stopped the fight at 2:25 of round 1.

After the fight, Joyce, 33, made it clear that he’s ready to progress to the bigger fights now with his career. Not content with fighting journeyman level opposition, Joyce is ready to step i up against the best in the heavyweight division. Before last Saturday night, Joyce had expressed interest in facing Jarrell ‘Big Baby’ Miller, Dillian Whyte, Luis ‘King Kong’ Ortiz and Dereck Chsora. Thus far, Joyce has had no luck in getting any of those heavyweights to fight him.

“Woah, like I showed, I’ve been doing well,” Joyce said to BT Sport Box Office. “There’s plenty more to come. I hope I put on something good to watch. I’m ready for anyone. I want to get in some bigger fights. I’m ready to show you all.”

Joyce is now with the right management in being signed with Al Haymon, who will help move him along at a faster pace then if he was with less powerful adviser. Joyce needs to be moved quickly though. If he was ten years younger at 23, then there would be time enough for Joyce to be moved in slow increments to an eventual world title shot, but he’s not young at 33. Given that it will likely take Joyce three years before he’s in position to fight for a world title, he could be 36 or older before he eventually gets a crack at a world title unless Haymon can set him up with a fight against WBC champion Deontay Wilder. Haymon doesn’t manage IBF/WBA/WBO champion Anthony Joshua, so he’s not an option. It would be nice if Joshua’s promoter Eddie Hearn would be willing to let Joyce challenge AJ for his titles, but that’s not going to happen. Hearn has ideas of matching Joshua against most of his heavyweights in his Matchroom Boxing stable. Once Joshua has gone though all of them, Hearn will likely have him start over with rematches.

At this point, it would be good just to see Joyce fight a contender for the first time in his career. Joe Hanks wasn’t a contender. He was a journeyman level fighter, and inactive one at that. A good contender for Joyce to fight would be one of these guys:


« Tyson Fury: Joshua can’t move like me, Wilder would nail him