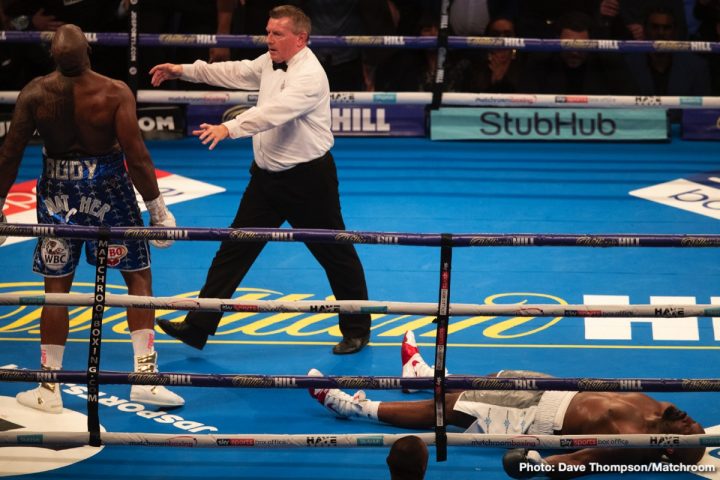 By Scott Gilfoid: Moments after Dillian Whyte’s 11th round knockout of Dereck Chisora last Saturday night at the O2 Arena in London, England, Matchroom Boxing promoter Eddie Hearn didn’t even attempt to conceal his eagerness to start negotiating the Anthony Joshua vs. Whyte rematch for April 13 at Wembley Stadium. Hearn says that he’s starting the Joshua-Whyte 2 negotiations “immediately,” because he doubts that he’s going to be able to put together fight between Joshua and WBC heavyweight champion Deontay ‘Bronze Bomber” Wilder for the 13th of April at Wembley.

Hearn also said he thinks 100,000 boxing fans will show up to watch Joshua vs. Whyte II at Wembley. Hearn thinking Joshua vs. Whyte II sells 100,000 for Wembley seems like a pipe dream on his part. The British boxing public has already seen Joshua fight Whyte in 2015, and it ended with a knockout in the 7th. There was nothing controversial about that win for Joshua. He battered Whyte in rounds 1, 3, 4, 5, 6 and 7. The only round in which Whyte briefly did well was in the 2nd after he clipped Joshua with a left hook.

The fans want to see Joshua fight Wilder or Fury, not Whyte again. Hearn combing through his Matchroom stable to find retread opponents for Joshua to fight is disappointing for a lot of boxing fans. For a promoter like Hearn to just look at his own fighters to match against Joshua (22-0, 21 KOs), it looks like a self-serving move on his part. Hearn is already talking about wanting to match another one of his Matchroom Sport fighters in Jarrell ‘Big Baby’ Miller against Joshua later on in 2019. With Hearn’s keen interest in pitting Miller against Joshua next year, it makes it look obvious that there WON’T be a Joshua-Wilder fight in 2019.

It’s not surprising that Hearn seems so estatic at making the Joshua-Whyte 2 rematch, as he’s not shown any interest in matching Joshua against Deontay Wilder, Tyson Fury and Luis ‘King Kong’ Ortiz. Those are the ‘Big three’ of the heavyweight division, and Hearn has veered a wide path around them when it comes to Joshua.

Pretty much immediately,” Hearn said when asked when he’ll start negotiations for the Joshua vs. Whyte 2 fight for April 13. It’s a fight that Hearn has been banging the drum for since the two fought each other in December 2015, with Joshua knocking Whyte out in the 7th round at the O2 Arena. The fight pulled in big ratings at the time for Sky Sports, and Hearn loved it. He doesn’t care that the fight was one-sided, and that the boxing public wants to see Joshua matched against guys that he hasn’t fought before like Luis ‘King Kong’ Ortiz, Wilder and Joe Joyce.

Hearn promotes Whyte and Joshua, so the reatch is going to happen on April 13, unless Wilder agrees to whatever offer that he gives him. Hearn isn’t being public with his offers to Wilder for the April 13 fight, but Joshua is. He’s saying that Wilder will be given a flat fee offer with some pay-per-view upside. When you hear about a fighter that is being given a flat fee offer, it’s a good sign that the fight won’t get made. Flat fee offers work for fighters that don’t have the popularity to insist on a percentage deal.

Joshua offering a popular fighter like Wilder a flat fee tells you that there’s no true interest in making the fight with him for April 13. Since that’s the apparent situation, then its’s even more important that Hearn quickly negotiate the Joshua vs. Whyte rematch so that he can start promoting the April 13 fight to the hilt, and hope that the UK boxing fans are interested in paying to see it live at Wembley Stadium and order it on Sky Box Office PPV.

With the way that Whyte (25-1, 18 KOs) performed against Chisora (29-9, 21 KOs) last Saturday night, he’s not going to do well against Joshua on April 13. Whyte looked very beatable last night. Aside from the two point deductions referee Marcus McDonnell docked Chisora in rounds eight and eleven, it looked like Dereck was in well control of the fight. Indeed, two of the judges had Chisora up 95-94, 95-94 going into the 11th round. The referee McDonnell choosing to take away a point from Chisora for the use of an elbow in the 11th, it seemed to cause him to lose his concentration after that. Chisora left himself open by throwing shots with anger after being docked a point.

Whyte took full advantage of that by tagging Chisora with a left to the head that knocked him down. The fight was then stopped. Had Chisora kept his cool after the deduction, there’s a chance that he would have won the fight. Chisora came into the fight rated #5 IBF and #5 WBA. He was not seen as being on the same talent level of former heavyweight world title challenger Luis ‘King Kong’ Ortiz (30-1, 26 KOs).

The way that Whyte had to struggle so badly against a limited fighter like Chisora shows clearly that he wouldn’t last long if Hearn had matched him against Ortiz or someone like Oleksander Usyk and Joe Joyce. Of course, Hearn would likely never let Ortiz anywhere near Whyte, for obvious reasons. Hearn is a businessman, and Ortiz would likely be bad for his business if he was the one that was inside the ring with Whyte last night instead of Chisora, who has been beaten many times in the past by the likes of David Haye, Tyson Fury, Agit Kabayel, Vitali Klitschko, Robert Helenius and Whyte. 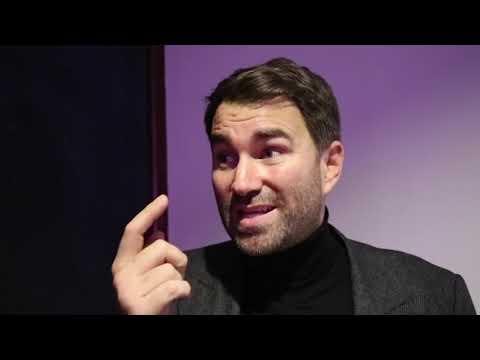 Adonis Stevenson out of induced coma »