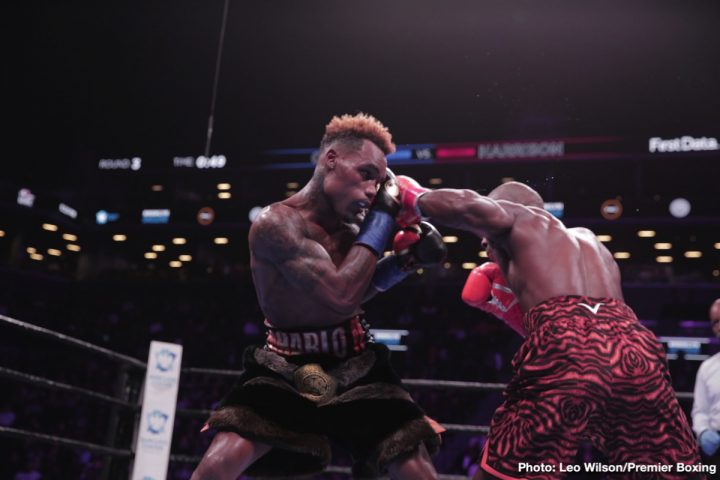 By Chris Williams: Former WBC junior middleweight champion Jermell Charlo (31-2, 15 KOs) says there will be a rematch with his conqueror Tony Harrison (28-2, 21 KOs) within the next four months so that he can attempt to avenge his 12 round unanimous decision that he suffered against him last Saturday night at the Barclays Center in Brooklyn, New York. Charlo, 28, maintains that he deserved the win, but he couldn’t do anything due to the “biased” judges, who scored it for Harrison by the scores 115-113, 115-113 and 116-112.

Charlo was hurt in round five after getting hit hard by a big left hand to the head by Harrison. Charlo was able to take the punch, but it showed that he was going to have to dig deep to win the fight. Charlo made the mistake of looking for single shot knockout blows, and that left him open to Harrison’s strong jab. The 6’1″ Harrison bothered the 5’11” Charlo with his height and reach the entire fight. Like his brother Jermall, most of opposition that Charlo has fought during his career have been shorter fighters than himself. When Jermell finally had to deal with a taller guy in Harrison, he wasn’t prepared well to handle his height and reach. The result is Charlo suffered his first loss, and he’s seemingly in denial about it. Charlo is not admitting that he was beaten, and that’s troubling.

Harrison was effective with his jab as he attempted to keep the power-punching Charlo at bay. Harrison landed his biggest punch of the fight in round five when a straight left appeared to temporarily stun Charlo.

This was supposed to be a tune-up fight Charlo against a fighter that had been stopped previously by Jarrett Hurd and Willie Nelson, but it turned out to be more than he could handle. Even if one were to believe that Charlo was a victim of “biased” judges, it still doesn’t answer the question of why he struggled so badly against a tune-up opponent that had been knocked out last year by Jarrett Hurd.

“There’s a rematch clause. We’ll be fighting in four months,” Jermell Charlo said about him electing to use his rematch clause to face Tony Harrison in next four months. “If I don’t get the knockout, the judges have their own way of thinking. They’re biased. The show was about the Charlo twins. My brother [Jermall Charlo], we seen what’s going on, and I definitely feel like I won the fight. I put out more rounds,” Charlo said.

Both fighters had their moments last Saturday night, but it was Harrison had more going for him than Charlo did. Harrison was landing a lot of hard shots that Charlo was forced to take through the three quarters of the contest. Charlo mounted a comeback in rounds 10, 11 and 12, but he had given away too many rounds early on for him to make up the difference. The victory for Harrison, 28, was a huge upset, considering that he was chosen as an opponent for a showcase effort by Charlo. This was not supposed to be a fight that Charlo had any chance of losing. The idea was for Charlo and his brother Jermall Charlo to shine in victories right before Christmas.

Charlo, 28, is having a hard time processing the loss, which is unfortunate. When a fighter fails to accept that they were beaten, then it’s sometimes hard for them to improve their performances.

“Like I said, there will be a rematch, I promise you,” Charlo said about insisting on facing Harrison again. I’m going to train harder. I ain’t no loser. I don’t take losing easy. Even when I play video games, I don’t like losing. I use my power. I have skills. I have power. I have speed. I’ll try my best to land my best shot to get the night over with. Do you know what I mean? I know how to fight. I’ve done it before. I still believe in my power. It’s just going to take another chance. I’m young. I’m 28-years-old,” Jermell said.

Charlo did land some huge shots during the 12 round fight, and he seemed to stun Harrison in the 5th, which was the same round he was hurt in. In the 9th, both fighters landed huge shots. After being boxed for most of the fight, Charlo seemed pleased that Harrison was finally fighting his type o fight by going to war with him. With all the sparring that Charlo does with Errol Spence Jr., he’s quite comfortable in fighting guys that slug with him. Harrison wasn’t going to play into Charlo’s trap though. After the 9th, Harrison went back to boxing Charlo, fighting smart and fighting under control. Not surprisingly, Charlo didn’t do as well in rounds 10, 11 and 12 with Harrison using his jab, and not slugging it out with him.

After the fight, Charlo was still talking about wanting to face IBF/WBA junior middleweight champion Jarrett Hurd in a unification match in the future. Hurd was in the audience last night, and he had to have been more than a little shocked to see his fight with Charlo go down the drain. It’s possible the Hurd vs. Charlo fight will happen in the future, but it’s going to need to wait until the Harrison-Charlo rematch takes place. It’s still anyone’s guess whether Jermell will beat Harrison in the rematch. Charlo might lose again. The mistake that Charlo made in trying to knock Harrison out with every punch he threw is likely going to make him vulnerable in the rematch if he choose to fight in the same way again. Charlo needs to change his fighting style for him to improve his chances of beating Harrison. Charlo lacks the tenacity, punching power, and the willingness to take some shots from Harrison to walk him down and stop him the way Hurd did in 2017.

If Charlo has the same kind of judges that worked his brother Jermall’s fight last Saturday night against Matt Korobov, then you’d have to say that he’s a got a very good chance of avenging his loss to Harrison in the rematch. Many if not most boxing fans felt that Jermall lost to Korobov in the main event. It was a controversial win for Jermall. There was booing from the crowd after the results of the contest were announced.

Hurd will likely wait around to see if Charlo can recapture his WBC 154 lb title, but if fails to, then he’s going to move on and look to capture the belt from Harrison. Hurd planned on moving up in weight to middleweight. There’s more money for Hurd to make at middleweight than there is by staying at 154, and waiting around to see if Charlo can recapture his World Boxing Council junior middleweight title. That might be a waste of time for Hurd, especially if Charlo loses again. Hurd wants to unify the entire junior middleweight division, but that’s unlikely to happen. It’s not that Hurd lacks the talent. It’s more of a case of the difficulty of him getting a fight against WBO champion Jaime Munguia. He’s co-promoted by Golden Boy Promotions, and they’re not likely going to let him face an experienced fighter like the 28-year-old Hurd. Munguia, 22, is still really young, and needs to develop before he faces fighters with Hurd’s type of talent.

For Harrison, this was his second time fighting for a world title, and he looked sensational in winning a close 12 round decision over Charlo. In Harrison’s previous attempt at a world title, he was beaten by Jarrett Hurd by a 9th round knockout loss in a failed attempt to capture the vacant International Boxing Federation light middleweight title in February 2017. Charlo’s reign as the WBC 154 pound champion came to a screeching halt in his fourth defense. Charlo has previously successfully defended his WBC belt in beating Austin Trout, Erickson Lubin and Charles Hatley.


« Adonis Stevenson out of induced coma

Eubank Jr. to fight in February in “Massive fight,” possibly against DeGale »