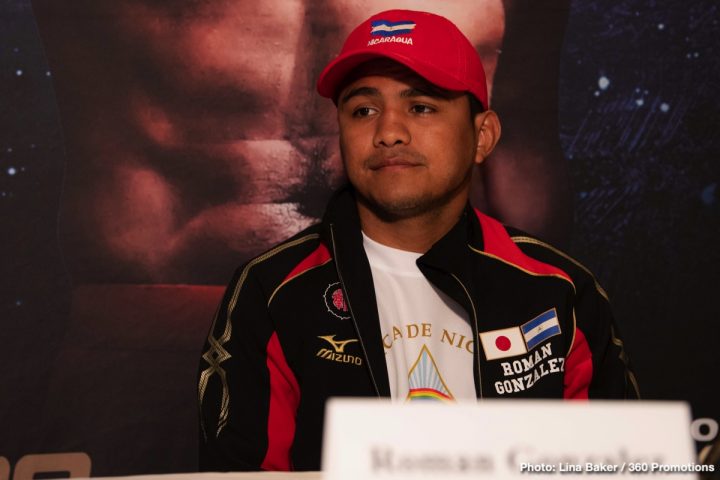 By Dan Ambrose: Roman ‘Chocolatito’ Gonzalez (47-2, 39 KOs) has reportedly suffered a knee injury, and has pulled out of his December 8 fight on HBO at the StubHub Center in Carson, California, according to his promoter Tom Loeffler of 360 Boxing Promotions.

A week ago, the 31-year-old Gonzalez suffered a knee injury while training for his December 8 fight against Pedro Guevara. Chocolatito was scheduled to fight Guevara in a 10 round fight in the co-feature on the December 8 card on HBO Boxing.

A possible replacement for Chocolatito is former flyweight champion Juan Francisco Estrada (37-3, 25 KOs), who would step in and face Guevara in the co-feature bout. It’s a perfect situation for Loeffler. Estrada had already been training for a fight in Mexico, but that fight fell through, so hes now available to fight Guevara. Having Estrada face Guevara could be an more interesting fight than if Chocolatito had fought him. It’ll be a little more competitive. Although Chocolatito looked bad in his two fights against Srisaket Sor Rungvisai, he’s still arguably a better fighter than Estrada. It’ll be a little more of a competitive fight between Estrada and Guevara.

Estrada recently found out the hard way how talented Srisaket Sor Rungvisai is in losing to him by a 12 round majority decision last decision last February. Estrada spent most of the fight on the outside trying not to get hit by Rungvisai. The only round that Estrada appeared to win was the 12th, and that was when he emptied his gas tank and had a very tired looking Rungvisai hurt. Never the less, Rungvisai had dominated the first 11 rounds, and it wasn’t nearly enough for Estrada to get the decision from his last ditch effort in the 12th. It was a good rally in the 12th by Estrada, but he had been worked over by Rungvisai in the first 11 rounds, and he needed a knockout. Estrada is ranked #1 by the World Boxing Council after beating Felipe Orucuta by a 12 round unanimous decision last September. Estrada wants a rematch with the Thailand fighter Rungvisai, but the outcome likely won’t be any different from the first fight. The judges aren’t going to give Estrada the victory if all he’s doing is staying on the outside trying to avoid the vicious body shots that Rungvisai kept hitting him with all night long. Estrada did a good job of using head movement to avoid Rungvisai’s punches, but he couldn’t do anything when he adapted and started throwing massive body shots. As much as Estrada tried to get out of the way of the punches to the midsection, he couldn’t. The only thing Estrada could do is stay on the outside, and give away the rounds for lack of aggression. If that’s the way that Estrada is going to fight in the rematch with Rungvisai, then he shouldn’t bother wasting his time. Estrada would be better off going after WBA 115 lb champion Khalid Yafai or the vacant World Boxing Organization title.

Gonzalez will have a procedure done on his injured knee, and he’ll be back inside the ring in the first half of 2019. That’s good news for WBA World super flyweight champion Khalid Yafai. That’s a fight that Yafai and his promoter Eddie Hearn both want and need. Chocolatito has the name recognition to help Yafai’s career if he can beat him.

Chocolatito, 31, was supposed to be facing former WBC light flyweight champion Pedro Guevara (32-3-1, 19 KOs) in the main event on the card. That’s no longer happening. With the former four division world champion and Ring Magazine pound-for-pound king Gonzalez off the card, it’s possible that the Cecilia Braekhus vs. Aleksandra Magdziak Lopes could be moved to the main event.

In Gonzalez’s last three fights, he has a record of 1-2, with two losses to Srisaket Sor Rungvisai. Believe it or not, Gonzalez wants a third fight against Rungvisai. Loeffler might not be in a hurry to put that fight together. There are safer options for Chocolatito to fight at super flyweight like Yafai, Donnie Nietes, Juan Francisco Estrada, Carlos Cuadras or possibly Jerwin Ancajas. Rungvisai has already proven in his two fights with Gonzalez that he has too much punching power and size for him. A third fight between them would likely be a replay of the first two with Chocolatito getting knocked out or badly beaten by decision. Gonzalez doesn’t possess the size, power, defensive ability or the mobility to handle what Rungvisai brings to the table.

“I was offered the fight with Yafai, but before I have this challenge, I know it’s a good possibility, but let’s see if Yafai is concrete,” Chocolatito said recently to espn.com. “I would also like a new opportunity with [Srisaket sor] Rungvisai, we would have to prepare better than ever, with A lot of strategy, trying to take care of his left, it will be a complicated fight, but everything I did would be different.”

Yafai’s promoter Eddie Hearn is likely going to make a move to put the Chocolatito fight together. It’s arguably the best fight that can be made for Chocolatito right now involving a winnable fight against a world champion at 115. It would be in Chocolatito’s best interest to have the Yafai fight take place at a neutral venue though, so he doesn’t wind up losing a controversial decision like we saw with Israel Gonzalez last Saturday night. Yafai beat Gonzalez last Saturday night at the Casino de Monte Carlo Salle Medecin, Monte Carlo. The boxing pubic felt that Israel Gonzalez deserved the decision.

“Unfortunately, he injured his knee when he was running in camp so he is not able to fight or train, so he is off the show,” Gonzalez’s promoter Tom Loeffler said to ESPN.com. “He got hurt last week and got therapy and a cortisone shot but his knee didn’t respond. He is going to have arthroscopic surgery on it. It’s the kind of thing where he should be out about six weeks and come back in the first quarter of next year.”

Depending on how badly injured Chocolatito’s knee injury is, hopefully he’ll be ready to fight in the spring.

Chocolatito’s best bet to win another world title is to follow the same path that this writer prescribed for Estrada. Chocolatito needs to stay far away from Rungvisai and instead target the vulnerable WBA champion Khalid Yafai or go after the WBO title. Chocolatito can probably beat Yafai and Donnie Nietes. Moving up to bantamweight would be a bad idea for Gonzalez, as he lacks the size to be competing with Naoya Inoue, Zolani Tete, Nonito Donaire, Luis Nery and Emmanuel Rodriguez. Those are all very good fighters that have size and power working for them. Chocolatito doesn’t need to put himself in the position where he has to fight those types of guys. He would be better off moving back down to flyweight where his punching power would go a lot farther, and his lack of size wouldn’t be as much of an issue as it is now at super flyweight. There’s something preventing Gonzalez from swallowing his pride and moving back down to 112. Staying at super flyweight is going to result in Chocolatito shortening his career, as he gets hit too much in this weight class, and his power isn’t good enough to score knockouts like before when he was fighting at 105, 108 and 112.

« Hearn expects Khan vs. Brook negotiations to be completed by December