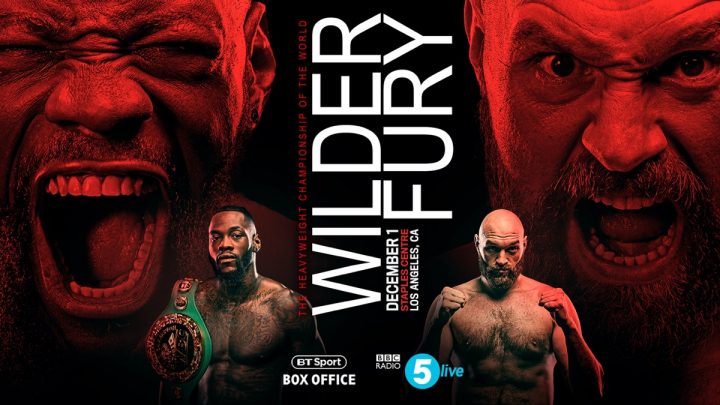 By Trevor McIntyre: Eddie Hearn is going to need to give Tyson Fury his asking price if he wants to put together a fight between him and Anthony Joshua in 2019. Fury (27-0, 19 KOs) is demanding that he get a 60-40 purse split in his favor for the Joshua fight, according to IFL TV. If Fury is coming off two big wins over WBC heavyweight champion Deontay Wilder, he could get his asking price.

If Hearn is smart, he’ll negotiate his way to a 50-50 deal for the Joshua-Fury fight. It’s a fight that could make a mountain of money for both fighters, and it would help Joshua’s legacy by adding Fury’s name to his resume. If Hearn is unreasonable and continues to insist on Joshua getting massive splits in his favor, then Fury will go his way and wind up fighting other opposition. Joshua will need to be satisfied fighting the likes of Jarrell ‘Big Baby’ Miller, Dillian Whyte, Dave Allen, Kubrat Pulev, Adam Kownacki and Hughie Fury. Deontay Wilder doesn’t enter into the conversation, since he wants a 50-50 deal, and Hearn isn’t willing to give it to him.

With Hearn’s tight-fisted reputation when it comes to negotiating purse splits for Joshua’s opponents, he might be apoplectic at hearing the news of Fury, 6’9″, saying that he wants 60% of the loot for the fight. Hearn been offering Wilder horribly one-sided deals in favor of Joshua in giving him flat fee offers. The offers that Hearn has been giving to Wilder are little more than 85-15 and 80-20 splits in Joshua’s favor. Hearn might view Fury as a different case though. He’s from the UK, he has a lot of boxing fans there, and he’s arguably less of a threat to beating Joshua than the 6’7″ Wilder. Hearn might be open to giving Fury a large split. However, it’s unthinkable to imagine Hearn agreeing to give Fury a 60-40 split. Hearn might be agreeable to give Fury a 60-40 deal with Joshua getting the majority of the money, but not the other way around.

Unfortunately for Fury, he needs to beat Wilder (40-0, 39 KOs) twice in a row, as he has a rematch clause in the contract for their fight this Saturday night on Showtime pay-per-view at the Staples Center in Los Angeles, California. If Fury does beat Wilder on Saturday, the rematch would be taking place in the first quarter of 2019. However, there’s always a chance that Fury might be able to put the Wilder rematch on hold while he faces Joshua in a big money unification fight. It’s better for Wilder if he sits back and waits for the smoke to clear from a Fury vs. Joshua fight rather than pushing for a rematch right away against the ‘Gypsy King.’

Fury’s recent statement about not caring about money this week doesn’t exactly go well with him now demanding a 60-40 split in his favor for the Joshua (22-0, 21 KOs) fight. If Fury truly doesn’t care about money, then it’s a bad look on his part with him doing a sudden reversal in asking for the lion’s share of the loot for the fight. Fury obvious does care about money.