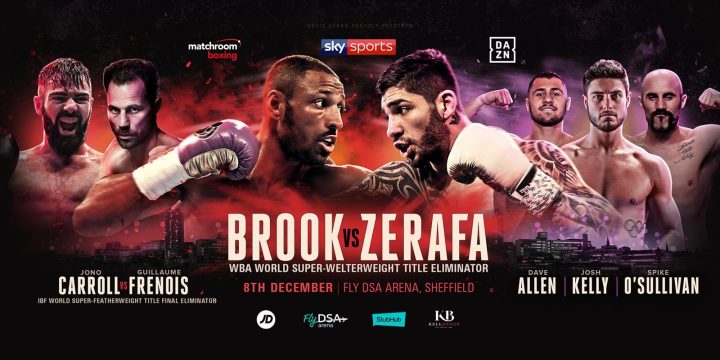 By Scott Gilfoid: Kell Brook’s fight against lower level junior middleweight fighter Michael Zerafa on December 8 could be his last ever in Sheffield, as he says he wants to go after bigger fights against Amir Khan, Errol Spence Jr., Shawn Porter and Keith ‘One Time’ Thurman.

Brook’s revelation that his fight against the 26-year-old Zerafa could be his last in Sheffield will further the strong belief that boxing fans have that he’s just looking for a cash out fight against Khan. Unfortunately for Brook, that’s the general perception the fans have about him. They think he’s got tunnel vision completely for the big payday fight against Khan (33-4, 20 KOs), and then he’ll be retiring just like Tony Bellew did after his cash out fight against Oleksander Usyk. Carl Froch had a cash out against George Groves, and we could be seeing Brook walk away from boxing after he faces Khan.

“This will be an emotional fight for me because I think this will be my last in Sheffield,” said Brook. “We hope that the Khan fight is next and after I’ve knocked him out I want the Spence Jr rematch and it’s likely that will be in the States.”

It looks so bad when fighters start talking retirement before fights or saying that this is their last fight in a given town. Gone are the day when you had talents like Salvador Sanchez, Roberto Duran and Wilfredo Gomez facing the best opposition each time out. In place of those talents, you’ve got Brook fighting little known Zerafa and Sergey Rabchenko in back to back fights in 2018. Brook has devoted an entire year of his prime in fighting tune-ups for some unknown reason. The boxing fans see it as Brook being unwilling to take any chances of him getting beaten again, reason being that he wants to make sure he gets the Khan fight. The question is would a boxing great like Salvador Sanchez devote an entire year of the prime of his career taking tune-ups just to make sure he doesn’t get beat before a big money fight? Sanchez wouldn’t have done that.

Khan hopes Brook wins his fight against Zerafa and looks good in the process. He hasn’t talked about the 10-lb rehydration clause that he’s been asking for him to agree for their fight in March 2019, but it’s rumored that he’s dropping that demand. That means Brook only needs to make weight at 147 lbs for the fight. It’ll be interesting to see if Brook can get Khan to drop that demand as well by dragging his feet in the sand, and complaining to the boxing media about how unfair it is. If it worked once for Brook to get Khan to drop his rehydration clause, then maybe it’ll work a second time to get him to agree to let him weight in at 154 lbs. Khan isn’t a junior middleweight though, but Brook isn’t a welterweight. He’s a junior middleweight that likes to fight welterweights. Brook used to be able to make weight at 147 without it draining him, but not anymore.

“He’s meeting me at a terrible time,” Brook said about Zerafa. “I’ve never been so focused and I plan of giving my Sheffield fans a blistering performance on December 8.”

Zerafa looked awfully bad in his 5th round knockout loss to Peter Quillin in 2015. Zerafa was getting hit flush with every power punch Quillin was throwing in that fight. Despite Quillin winning the fight, he took tons of abuse from boxing fans for picking out such a poor opponent. Now Brook is facing the same guy in Zerafan, and it’s going to be an equally bad fight. It’s surprising that Brook and his promoter Eddie Hearn feel the nee to take another tune-up fight at this stage. Fighting Rabchenko was somewhat understandable for Brook to do last March, as he had been stopped in his previous fight by Spence in May 2017, and he was coming off of a bad eye injury, surgery and a long layoff. But it’s a waste of Brook’s time to take a second tune-up fight after the first one.

Instead of Brook talking about his fight with Zerafa possibly being his last in Sheffield, he should keep his options open. There’s no point in Brook alarming his boxing fans by getting them worked up after hearing him that this could be his last fight in his hometown. If it is his last fight, then so be it, but it looks bad for Brook to be talking about it ahead of time. It comes across to some boxing fans like he’s trying to get fans to purchase tickets to see his tune-up level fight against Zerafa. If the fans want to see the Brook-Zerafa fight, then they’ll come out, but Brook doesn’t need to start talking about this being this maybe being his last fight in Sheffield.

If Brook does wind up fighting in Sheffield in the future, it’s going to look like he was just trying to get fans to purchase tickets for his mismatch against Zerafa. What would be really bad is if Brook does the same bit in his next fight in Sheffield by talking up the idea that this will be his last fight there. At some point it’s forlorn. Brook crying wolf isn’t going to help sell tickets to his tune-up fights.

If he wants to make sure his fights sell out, he should be fighting good opposition like Erislandy Lara, Jarrett Hurd or Jermell Charlo. You can bet the boxing fans in Sheffield would love to see Brook fight one of those guys at home. Why isn’t Brook’s wily promoter Eddie Hearn lining him up for fights against Hurd, Charlo, Lara or Julian ‘J-Rock’ Williams? Brook wouldn’t need to tell his Sheffield boxing fans that he’s fighting for the last time in his hometown if he were to fight those guys, as the tickets would likely fly off the shelf if he were to step it up against those kinds of talents instead of fighting journeyman level fighters like Rabchenko and Zerafa.

It seems that Brook (37-2, 26 KOs) doesn’t believe there’s much chance of luring Khan, Spence, Thurman and Porter to Sheffield. Spence (24-0, 21 KOs) came to the UK and fought Brook last year in May 2017 at Bramall Lane Football Ground in Sheffield, UK. It didn’t help Brook much though, considering that Spence stopped him in the 11th round after he took a knee to escape the tremendous pressure he was putting on him.