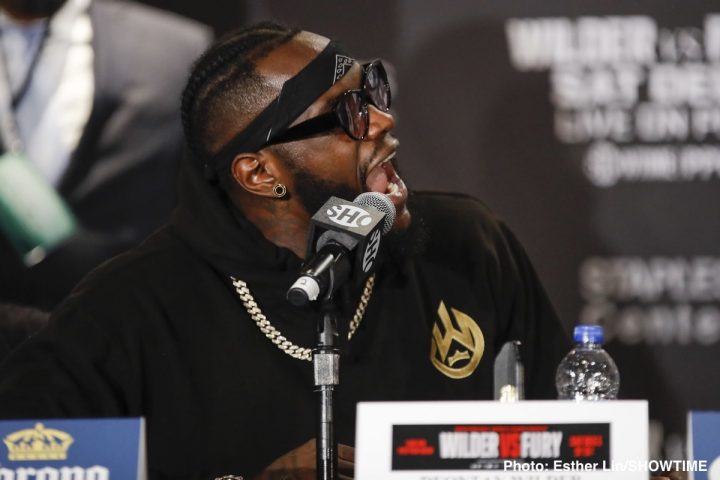 By Jeff Aranow: A snarling Deontay Wilder had a bad day on Wednesday, first almost starting a brawl with the happy go lucky Tyson Fury at the final news conference, and then ripping into reporter Radio Rahim by saying that he was trying to “bait” him by asking him to clarify a comment he made during an interview.

Wilder (40-0, 39 KOs) had made a comment during his face off with Fury in talking about his people having to deal with stuff 400 years. It’s unclear why Wilder brought it up during the news conference, as he’s fighting Fury on Saturday night and it looked he had deviated from the task at hand.

During a quick interview, Radio Raheem asked Wilder to explain what he was talking about in taking about his people. That’s when Wilder erupted into rage.

Fury is already ahead by two or three rounds against Wilder in the mental game. It’s up to Wilder get a hold of his emotions and recognize that Fury is playing games with him to get him to fight below his capability.

At this point, it would have been a good idea for Wilder to get a handle on his emotions, as he had come completely unglued and seemingly gotten away from the task at hand, which is his big pay-per-view fight on Showtime this Saturday night against unbeaten former IBF/IBO/WBA/WBO heavyweight champion Fury (27-0, 19 KOs) at the Staples Center in Los Angeles, California. Wilder, 32, is supposed to be helping to hype the fight, create interest from boxing fans, and talk about a unification match against Anthony Joshua. Wilder veered way off point in his brief interview with Raheem.

“I don’t got to explain what’s understood, Radio Raheem,” Wilder shouted. “I don’t have to explain what’s understood, man. You know what I mean by that. I ain’t got to go farther. And if anybody don’t understand that then God be with them; go look up the history. Don’t everybody believe in Google? Go Google that s–t; see what I’m talking about. You know what I’m talking about, man,” Wilder said.

It would be a good idea right now for Wilder to lower the animosity level a couple of notches, and remember that he’s in an athletic competition on Saturday night against a very good fighter in Fury. Wilder isn’t going to beat Fury if he’s angry and not thinking clearly. It’s a rare fighter that can win a fight when they’re angry. Wilder has got to be smart, and take his time when he gets inside the ring with Fury. If Wilder is coming into the contest with a lot of mental baggage that he’s distracted about, it’s not going to help him accomplish his goal. On the contrary, it’s going to work in Fury’s favor, since he wants Wilder to be angry and not thinking. Wilder might not realise it, but Fury has upset him in the same way he did with Wladimir Klitschko in 2015. Fury got into Wladimir’s head in the lead up to the fight, and then took full advantage of it by out-boxing the Ukrainian fighter for 12 rounds to win a close decision in front of his own boxing fans in Dusseldorf, Germany. Would Fury have beaten Wladimir if he’d stayed composed on the night. Probably not. Fury isn’t as good of a fighter as Wladimir. He’s not as fast, powerful, talented, mobile or as experienced. Wladimir lost the fight inside his head by being outsmarted by a less talented fighter in Fury. For that fight, Wladimir was the favorite to win, but he fought like a novice against a limited guy in Fury. Now it looks we could see the same thing happen on Saturday. It’s going to be up to Wilder to stand back and realise that he’s lost his cool and let Fury get to him mentally.

It might be a good idea for Wilder to limit his interviews until AFTER his fight with Fury so that doesn’t keep exploding on the reporters. This was supposed to be a fun fight for the 6’7″ Wilder when he signed on to defend his WBC title against Fury. Wilder has wanted to fight Fury for years now, and he’s finally got the chance of doing it. Now with the spotlight fully on Wilder, he should be showing his class and his best side of his personality and charisma. Instead, Wilder is coming across as an angry and bitter man. It’s not a good look for Wilder. This is time where Wilder needs to show his sense of humor, friendliness and keep things light. Wilder is showing the opposite of that part of him, and he’s doing it at the wrong time. If this was a simple fight against someone that the boxing public doesn’t care about, then Wilder’s anger toward his opponent and a humble reporter would possibly slip under the worldwide radar. That’s not happening here. The boxing public fully aware of what’s going on with the Wilder-Fury fight, so for that reason, it’s doubly important that Wilder shows only his best side of his personality. He’s trying to win over the casual boxing fans, not turn them off towards him permanently.

As far as the Wilder-Fury fight goes on Saturday, as long as Wilder can compartmentalize what’s happening with his life outside of the ring to what’s going on inside the squared circle, he should be okay. Wilder can’t be still thinking about how angry he is about things Fury has said to him or about social injustice that takes place inside the world. Wilder has got to see the fight as athetic competition, and realize he’s facing a very good fighter in Tyson Fury.

Fury’s lack of punching power will allow Wilder to take more risks in this fight than he could in his last title defense against Luis ‘King Kong’ Ortiz. Wilder had to stay on his guard for most of the fight against the southpaw Ortiz, being that he could get nailed with a big shot at any time. Ortiz almost knocked Wilder out in the 7th round after catching him with a perfect left hand bomb. Fury is going to be using ton of feints on Saturday just like he did against Wladimir Klitchko in 2015 Wilder has to understand that’s what of the tools Fury uses to keep his opponents from unloading on him with their best power shots.

The smart fighters know that Fury is there to be hit, so they ignore his feints and just hit him. Fury clearly lost his first fight against Big John McDermott in September 2009. They gave the win to Fury by a controversial 10 round decision, but McDermott clearly deserved the victory. What made McDermott so successful in that fight was the way he ignored Fury’s feints for the entire contest. McDermott always focused on being first with his punches, and he did’t care how many feints Fury used. He wanted hit him as much as possible. In the end, McDermott was arguably robbed against the A-side Fury. McDermott wasn’t supposed to beat Fury, so it wasn’t surprising that he wasn’t given the points decision that he rated.