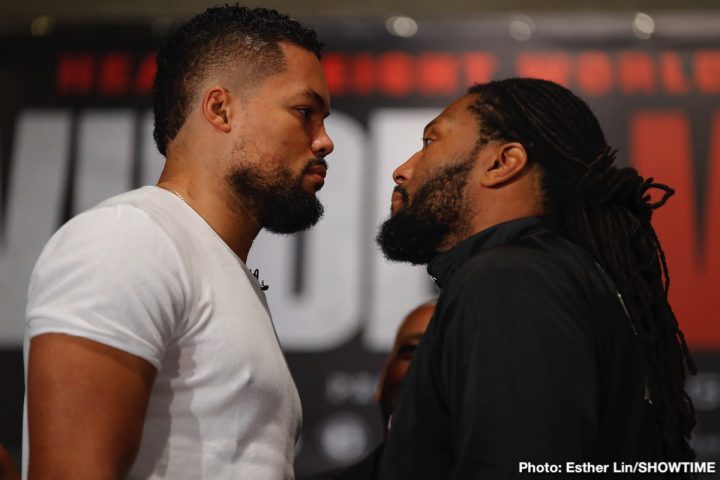 By Trevor McIntyre: Heavyweight contender Joe Joyce and his manager Sam Jones are planning on making a new offer to unbeaten contender Jarrell ‘Big Baby’ Miller for a fight in 2019, according to IFL TV.

Joyce and Jones are also interested in setting up fights against the highly ranked Luis ‘King Kong’ Ortiz and the unbeaten Adam Kownacki. Miller is the one that Joyce has his sights set on right now, but if he can’t get him to agree to a fight, then he’ll be going after Ortiz and Kownacki. Wins over either of those two talented heavyweight would result in Joyce getting pushed up the rankings in the heavyweight division. Joyce needs a #1 ranking to assure him a title shot against Anthony Joshua. That fight isn’t going to be given to Joyce on a silver platter. He’s got to earn it the hard way.

It’s going to take a monstrously big offer from Joyce’s management to get Jarrell Miller to agree to a fight against him. Miller is being groomed by his British co-promoter Eddie Hearn to fight Anthony Joshua. The money that Miller would make against Joshua for just one fight will likely be enough to retire on and never work again.

Miller isn’t going to want to risk that humongous payday against Joshua by facing an ambitious contender with Olympic experience like Joyce. It would help Miller to ultimately make a bigger payday against Joshua if he were to face Joyce and beat him by an impressive knockout. Miller vs. Joyce would get a lot of attention from boxing fans in the UK.

Miller could turn himself into a star overnight by taking on and beating Miler. But there would be tremendous risk involved in that fight, as Joyce is every bit as good of an inside fighter as Miller is, and he’s got better boxing skills from the outside.

Joyce can do a lot of things the 315 lb Miller can’t do inside the ring due to his mobility, and great jab. Miller would need Joyce to stay in the pocket at close range for the entire fight to have a chance of wearing him down and stopping him. There’s no guarantee that Miller wouldn’t get worn down and stopped by Joyce, who can really punch to the head and body in close.

It would be a very tough fight for Miller to take. The payoff for Miller would be huge if he beat Joyce. The PPV buys for a Joshua vs. Miller fight would clearly increase if ‘Big Baby’ defeated Joyce by a knockout. Miller doesn’t seem like he wants to take that risk right now.

Miller’s promoter Hearn is being very careful with how he’s matching him, putting him in with mostly old fighters like 41-year-old Adamek, 37-year-old Duhaupas, 38-year-old Mariusz Wach, 36-year-old Gerald Washington, 41-year-old Fred Kassi and 33-year-old Bogdan Dinu. Old age is the one constant for the match-making that Eddie Hearn is doing for Miller. When Hearn has deviated somewhat by putting Miller in with a heavyweight that wasn’t pushing 40, he would match him against a little known fringe level guy in Bogdan Dinu.

It’s clear that Hearn is being very careful with how he matches Miller. Hearn wants to make sure he keeps Miller unbeaten long enough to match him against Joshua in 2019 or 2020. It’s the same way Hearn is matching Amir Khan and Kell Brook. Hearn isn’t taking chances with either of his two Matchroom Sport fighters at this point. Brook is facing Michael Zerafa on December 8 in a fight that guarantees a victory for Kell. For his part, Khan is coming off of wins over fringe level fighters Samuel Vargas and Phil Lo Greco. Miller won’t be put in with Joyce by Hearn, simply because the outcome isn’t not assured for his fighter.

The unbeaten #10 WBA Joyce (6-0, 6 KOs) will be fighting this Saturday night against Joe Hanks (23-2, 15 KOs) in a 10 round fight on the undercard of Deontay Wilder vs. Tyson Fury at the Staples Center in Los Angeles, California. Joyce’s fight with Hanks won’t make it on the Showtime pay-per-view portion of the telecast, but there could be a clip of the action shown for boxing fans to get a glimpse of him if they’re watching closely. Joyce is expected to make quick work of the always tough 35-year-old Hanks.

Miller (23-0-1, 20 KOs) is the fighter that the 2016 Olympic super heavyweight silver medalist Joyce and his manager Jones want. They’ve been trying to get the 315 lb Miller to agree to take a fight with them, but he’s been reluctant to do so, feeling that 6’6″ Joyce brings nothing to the table. So instead of facing Joyce, Miller has slowly been surely been padding his record with wins over Bogdan Dinu, 41-year-old Tomasz Adamek, Johann Duhaupas, Mariusz Wach and Gerald Washington.

The 33-year-old Joyce needs to move his career at light speed for him to get a world title shot before he starts to deteriorate due to advancing age. Joyce will be turning 34 in 2019, and he doesn’t have the good fortune to be promoted by the same promoter as IBF/WBA/WBO heavyweight champion Anthony Joshua in Eddie Hearn of Matchroom Boxing. If Joyce had Hearn as his promoter, he’d likely be in line for a world title shot in 2019, like the Matchroom co-promoted Miller is. Joyce will need to take the riskiest fights for him to get a fast title shot against Joshua.

There’s little chance that Hearn is going to give Joyce a shot at Joshua unless he does something forces his hand. Even then, Joyce may still need to become one of the mandatory challengers to Joshua before he gets a title shot. Hearn has a lot of his own heavyweights in his Matchroom Boxing stable that he wants to put in with Joshua, starting with Dillian Whyte on April 13. After Joshua fights Whyte in April, he’s expected to fight the Matchroom promoted ‘Big Baby’ Miller in the second half of 2019. Joyce, if he’s lucky, might be in position to challenge for a title against Joshua in 2020 or 2021. It’s going to depend on whether Joyce can get the fights he wants against Miler, Ortiz and Kownacki. Right now, it’s highly unlikely that Joyce will get any of those fighters to face him.

It would be a fun fight to see Joyce and Jarrell Miller going at it. Both guys are huge, hit hard and have great engines. They both like to throw nonstop punches from close range. You don’t see too many heavyweights like Joyce and Miller that come along too often. The bigger heavyweights generally have poor stamina, and tire out quickly in their fights. Miller and Joyce are the opposite. They can throw punches for three minutes of every round without tiring.


« Tyson Fury: “Deontay Wilder wanted me to hit him”