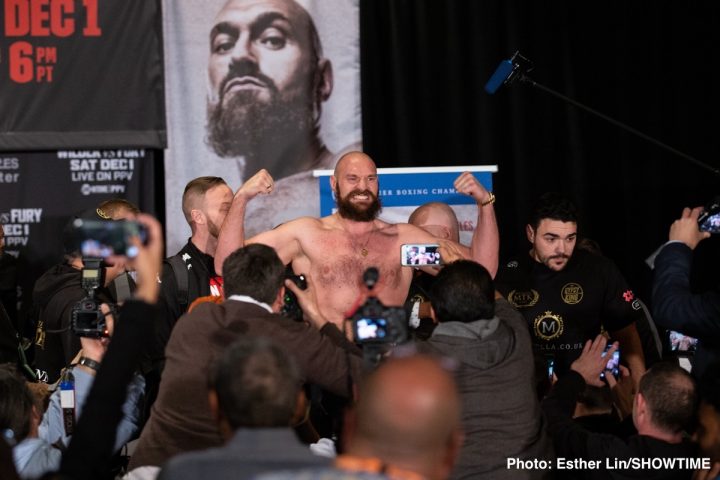 By Jonny Rashman: The WBC heavyweight title fight between American Champion Deontay Wilder and the former undisputed heavyweight champion Tyson Fury is no more than 48 hours away. There are so many variables to add in to the melting pot, which will make this fight compelling viewing from start to finish. The gripping background of this fight has anticipation at fever pitch. Anything can happen when the first bell rings in the staple Center on Saturday night. The closer Saturday gets, the more I believe that even a 30% Tyson Fury is more than enough to dethrone Deontay Wilder. I am in no doubt that the only challenge Fury has to face when the first bell rings is with himself.

In the mythical laws of boxing Tyson Fury’s slick counter boxing style easily dominates the wild and erratic style of wilder, 10 times out of 10. It’s the classic boxer vs puncher scenario. Anyone who understands boxing will tell you a world class boxer will always beat a world class puncher. One of the Ingredients that soaks this fight with anticipation is the battle Fury has had to overcome in the last 3 years to get back on the world stage. Make no mistake if the Charismatic Fury had not taken such a long hiatus away from the boxing ring, the Wilder team would not be taking such a risk by accepting this challenge so close to a mega fight with undisputed Champion Anthony Joshua. Wilder’s team is banking on Fury being a shell of his former self. They think their man will smash through him and that Fury’s body won’t be able to acclimatise to a high level hard 12 round fight. They might very well be correct in that respect.

When this fight was first announced my initial thought was this is far too much of a dangerous fight for Fury to be taking so early on in his comeback trail. His own trainer Ben Davison has stated that he wanted Fury to have 4 warm up fights before taking on a dangerous assignment like Wilder, however the closer this fight gets the more I am convinced Fury has enough tools to overcome Wilder.

I firmly believe that Deontay Wilder is possibly the least technically gifted heavyweight champion that has ever been crowned. This man has the worst balance and footwork I have ever seen a supposedly world class fighters possess. The wild and erratic manner he puts his combinations together can be a nightmare for fighters to face, at the same time a defensive boxing genius like Fury will easily negate this style. You only have to look at Wilder’s record to see that he is the most protected boxer in history, yes, he is undefeated in 40 fights and he has stopped everyone he has ever faced. That is a formidable achievement, but let’s be honest there is only one world class fighter on his record (Luis Ortiz) who dominated him in the early part of their contest and was only a hair’s breadth away from stopping wilder.There is a reason why his management team have been reluctant for him to face world class opposition. British promoter Eddie Hearn regularly points out the names on Anthony Joshua’s record compared to the resume of Wilder’s. The names are there to clearly see or should I say the lack off in Wilder’s case.

Don’t get me wrong I enjoy watching wilder fight as it always brings excitement. The only way he beats Fury on Saturday night is if ring rust proves to much for Fury to handle. Fury really is a magician in the ring, he has an array of tricks to bamboozle Wilder with. He can switch southpaw at any stage in the fight, He can a use a lighting fast jab to confuse you or a heavy ramrod jab to keep you on the back-foot, his constant lateral movement ensures fighters are always having to reset their feet to land power punches. This skill set is an absolute nightmare for Wilder, especially with his limited boxing IQ. If you look at the times he has faced tricky boxers and southpaw’s in his career, you can clearly see him thinking about how to work out this style. He has a confused look on his face, like he doesn’t know what combinations to throw. This will be the same on Saturday night. He is going to get the shock of his life when he sees first-hand just how tricky and elusive Tyson Fury can be. Boxing fans always discredit Fury’s victory over Wladimir Klitschko 3 years ago. They say Klitschko had an off night and that he never threw any punches. The reason he was so reluctant to throw any punches that night was that he so confused by Fury’s style, he just simply froze. Remember this was an undisputed champion who was undefeated for over 9 years. There is no way that a one-dimensional fighter in the class of Wilder can defuse this style.

As we all know it only takes one shot in the heavyweight division that can end proceedings in the blink of an eye. Deontay Wilder has the type of crushing one punch power that can render any human being unconscious at any stage in a 12-round fight. Could he land a big right hand on Fury’s chin? Maybe, is there a chance he could knock Tyson Fury out? Yes, does he have the boxing skill to be able to land clean on Fury’s chin? Absolutely not. I am 100% convinced that the only way Wilder can land a knockout blow, is if Fury’s reflexes have deserted him and that he is a shell of his former self. For me if this fight was 3 years ago Fury would have won every minute of every round. The lack of ring activity, the problems outside of the ring and the huge amount of weight Fury has had to strip, has made this fight a lot more exciting and competitive than it would have been. If a 30% Tyson Fury shows up on Saturday night, I believe this is enough to confuse the one-dimensional Deontay Wilder. All will be revealed very soon.