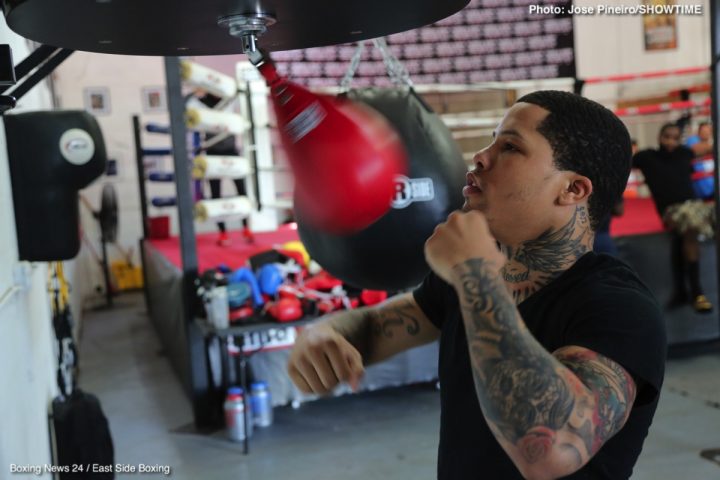 By Jim Dower: WBA Super World Super Featherweight champion Gervonta ‘Tank’ Davis (20-0, 19 KOs) and former three division world champion Abner Mares (31-3-1, 15 KOs) are nearing a deal for a fight in February, according to ESPN. This would be a fight televised on Showtime Boxing if the deal gets done. Showtime Sports president Stephen Espinoza says a deal is close between Mares and the 24-year-old Davis.

The fight needs to get made soon though, as there’s not much time for the two guys to prepare for it. Davis and Mares are both with Premier Boxing Champions adviser Al Haymon, which means getting the fight done between them shouldn’t be a problem.

Davis vs. Mares has been talked about for over a month now, and it now it’s looking like it’s going to be made. For Davis’ sake, he needs to fight someone soon. He only fought once in 2018, and he’s to be a lot busier than that if he wants to get the most out of his career. 33-year-old Mares isn’t the best fight out there for Davis, but at least he’d be fighting someone that the casual boxing fans can recognize. Mares is well past his prime at this point in his career, and coming off of a 12 round decision loss to Leo Santa Cruz last June. That’s the only fight Mares has had in 2018, so he’s in the same boat as Davis is in being underutilized.

“They’re in discussions and getting closer to a deal and, hopefully, it will be finalized to make the February schedule on Showtime,” said Espinoza to ESPN.com.

Davis won the World Boxing Association Super World super featherweight champion last April in easily stopping Jesus Marcelo Andres Cuellar in the 3rd round. This the same Cuellar that Mares beat by a 12 round split decision in 2016. Mares clearly beat Cuellar, but it wasn’t as nearly as dominating a performance as Davis’ third round knockout of the Argentinian fighter.

Mayweather Promotions has not kept Davis busy for some reason. He’s complained about wanting to fight on social media, but he’s not been kept busy enough to keep him happy.

For many years, Mares was one of the best fighters in boxing. However, he’s been on the decline since being knocked out in the 1st round by Jhonny Gonzalez in 2013. Mares has won world titles at 118, 122 and 126. Mares will need to move up one division from featherweight to meet Davis at super featherweight. It’s going to be tough on Mares to be able to compete with the youth, speed and the power of Davis. However, Mares is catching Davis after a long layoff, so it’s possible that he won’t be as sharp as he was in his last fight against Cuellar. If Davis is anywhere near that form, Mares won’t last long against him. Leo Santa Cruz is a good puncher, but he’s a plodder in comparison to Davis. Mares doesn’t belong inside the ring with a KO artist like Davis.

it’s pretty brave of Mares to move up a division to fight someone as tall as Gervonta. There aren’t too many fighters that are willing to move up from featherweight to take on a dangerous guy like Davis. Matchroom Boxing USA promoter Eddie Hearn wants to match Farmer against Davis, but those two fight in the same division at super featherweight. It’s not as if Farmer is coming up a weight class to take the fight with him.