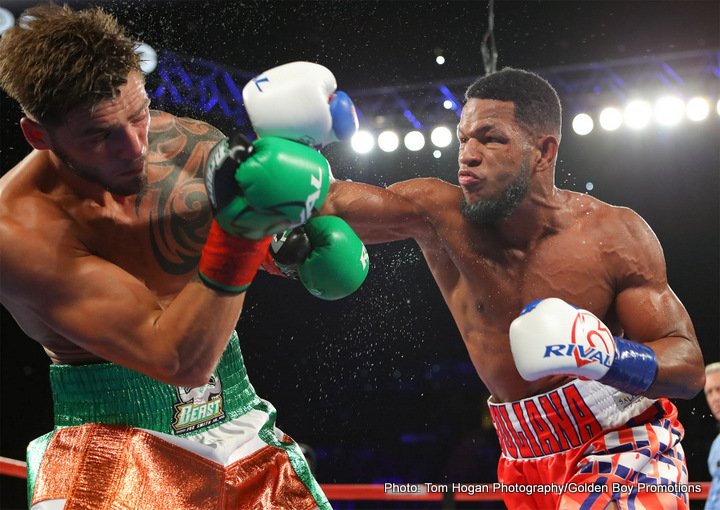 By Jim Dower: Former light heavyweight world title challenger Sullivan Barrera (21-2, 14 KOs) will be fighting “Irish” Seanie Monaghan (29-1, 17 KOs) on November 3 in a 10 round bout at the Aviator Sports and Events Center in Brooklyn, New York.

Barrera-Monaghan needed to be rescheduled from the previous date of August 18th due to the 36-year-old Barrera suffering an eye injury while training for the fight. Now that Barrera is 100 percent healthy and ready to go, he’ll be facing the 37-year-old Monaghan next month on the 3rd of November in Brooklyn, New York.

Barrera vs. Monaghan will be the headliner on “Golden Boy Fight Night” card on Facebook Watch.

This is a fight that could end early with Barrera destroying Monaghan. There’s a difference in class and experience between the two fighters, and it doesn’t look like it’s going to end well at all for Monaghan.

Monaghan is rated #4 WBO, #7 WBC and #9 IBF. He’s rated highly despite never having beaten anyone of note that you would consider good enough to place him in the top 10 in the rankings by three of the sanctioning bodies. Monaghan tried stepping up to world class last year in July in his fight with Marcus Browne, but it ended badly for him in getting knocked out in the 2nd round. Monaghan won his last fight in beating journeyman Evert Bravo by an 8 round unanimous decision last November. Monaghan’s best wins in his eight-year pro career have come against Donovan George, Jannie Forsman, Elvir Muriqi, Anthony Cuputo Smth, Matt Vanda, Fulgencio Zuniga and Rayco Saunders. In other words, Monaghan has been beating journeyman level opposition since he turned pro. As I mentioned, Monaghan tried to step it up in 2017 against Marcus Browne, but it was a disastrous showing by him. In facing Barrera, Monaghan would appear to be over his head once again and will likely lose by an early knockout if the former Cuban amateur star decides to step on the gas.

“We wanted Sullivan Barrera and Seanie Monaghan in the ring and were more disappointed than anyone when the original bout was postponed,”Main Events CEO Kathy Duva said via ESPN.com. “We were determined to make this fight happen, because I know these guys will give everything they’ve got for their legacy, and for the fans.”

Barrera suffered his second career defeat in his last fight in getting knocked out in the 12th round by WBA light heavyweight champion Dmitry Bivol on March 3, 2018. Barrera took a pounding from Bivol in the first six rounds of the fight, but then he came on to have some success in the later rounds when the Russian fighter tired out. However, in the 12th, Bivol came on strong with a renewed surge of energy to take Barrera out. It looked like Barrera wasn’t ready for Bivol to suddenly get his second wind in the 12th, and it ended up being too much for him.

The timing of Barrera coming off a hard loss against Bivol could work in Monaghan’s favor if he’s able to take the fight to the Cuban early on. Monaghan will need to get a quick start for him to have a chance of winning, because if he doesn’t go after Barrera early on, he might not make it to the second half of the fight.

Barrera needs to fight better opposition than Monaghan for him to get pushed up the rankings quickly. Monaghan arguably doesn’t deserve to be rated in the top 10 given the opposition he’s faced and the way he looked in his fight with Marcus Browne. Barrera should be looking to fight the likes of Browne, Isaac Chilemba, Callum Johnson, Jean Pascal, Anthony Yarde, Badou Jack and Sergey Kovalev.

”I’m willing to face the top guys in my division. This is another tough fighter. I look forward to Nov. 3, and I’ll give the fans a great show. They will see me start to climb my way back up to facing the very best light heavyweights in the world,” Barrera said.

Monaghan is a good stay busy fight for Barrera, but he needs to go way beyond this level of fighter to get another world title shot in the next year or two. fighting weak fighters like Monaghan won’t do much for Barrera.