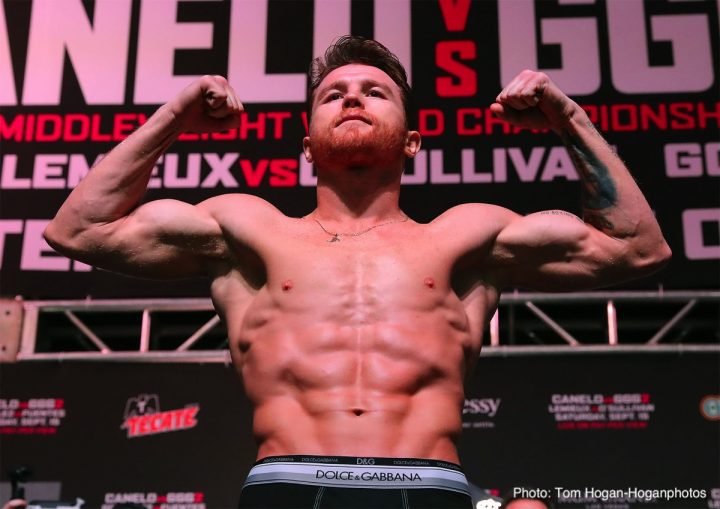 By Trevor McIntyre: Rocky Fielding will be making life-changing money when he defends his WBA World super middleweight title against middleweight Saul Canelo Alvarez on December 15. Canelo and Fielding’s promoter Eddie Hearn made the announcement on Friday about the December 15 Canelo-Fielding fight at Madison Square Garden in New York.

The money will be good for Fielding, who hasn’t tasted the big money fights during his career as of yet. Fielding (27-1, 15 KOs) lacks the star power of the more popular fighters like Amir Khan, Kell Brook, George Groves and Anthony Joshua all possess in the UK. Fielding is more of a blue collar type of fighter that puts in a hard night’s work and comes up with the victory in grinding down his opponents with size, power and force of will. Fielding, 31, will definitely have size. It’s unlikely that Fielding will be able to overcome the talent and speed advantage of the shorter 5’8” Canelo, but he at least has a chance of winning.

”I spoke to Rocky, and you have to get the best deal for your fighter, but this is the opportunity of a lifetime, this is a cinderella story,” Hearn said to skysports.com about Fielding’s title defense against Saul Alvarez. ”You couldn’t make this up. This is a fight that will change his life forever.”

If Fielding never gets another big money fight like this again, he might still have enough from this fight against Alvarez to retire on. It’s a great fight for a fighter who doesn’t get talked about as much as fighters like Brook, Khan, Joshua, Groves and Smith.

Canelo has only fought once at super middleweight in his fight against Julio Cesar Chavez Jr. last year in May 2017. You can’t really call that a fight though, as Chavez Jr. looked like he was just there for a payday and not interested in really fighting. Canelo won by default due to Chavez Jr. not even putting up a fight. Fielding is a completely different animal. He’s going to come into training camp for the December 15 fight against Canelo already in shape, and he’s not going to have to burn off 70+ pounds of fat the way Chavez Jr. reportedly did in getting ready for Alvarez. Chavez Jr. was said to have started training camp weighing 235 pounds for the Canelo fight. At that weight, Chavez Jr. never had a prayer in taking it all off in eight weeks and being strong for the fight. Golden Boy Promotions did a good job of picking out Chavez Jr. at the worst possible time in his boxing career to take on Canelo. Golden Boy won’t have that same advantage for the Fielding fight, because he’s going to be in tip top shape hen he gets inside the ring with Canelo.

”He [Fielding] will go in as the much bigger man, a big underdog in the fight,” Hearn said. ”We know that Canelo is coming up from 154 to 160. Rocky Fielding is going to be 180 pounds in the ring.”

A victory for Fielding will get him a rematch with Canelo, and that will give him even more life-changing money. Fielding has a chance to not only set himself up for life in his fight with Canelo on December 15, but also his kids if he pull this off.

From Fielding’s perspective, it pays off to be the WBA ‘regular’ super middleweight champion. He may not be well-respected by a lot of boxing fans, but he’s showing that it’s still not a bad thing to be the secondary champion with the WBA. If you can still get popular fighters like Canelo to fight you, then it’s not a negative to be the WBA’s regular belt holder at 168. For Canelo to get the upper level WBA belt at 168, he’ll need to fight Callum Smith, and that’ll be a whole different kettle of fish. Smith is similar to Fielding in size, but he possesses one-punch power. Fielding has thudding type of power that wears his opponents down. Smith is more of a one-punch and your out type of guy. Canelo was wise not to take that fight with Smith where he couldn’t afford to make a mistake. Canelo can make mistakes against Fielding and still last the 12 rounds.