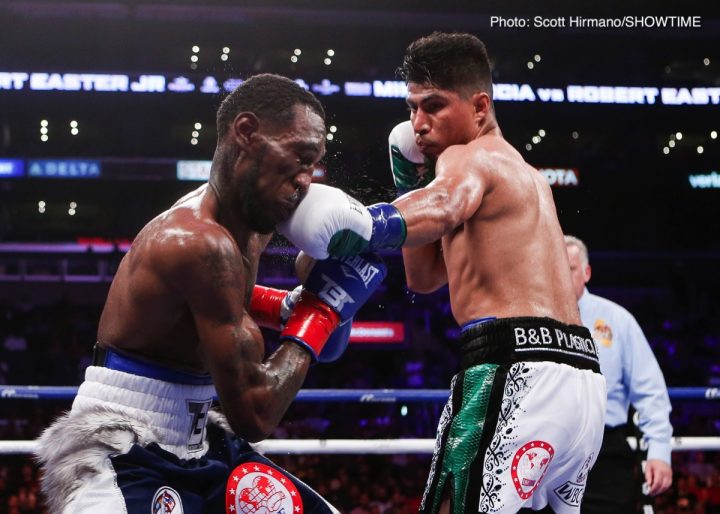 By Mike Smith: Mikey Garcia (39-0, 30 KOs) vacated his IBF lightweight title on Tuesday so that he can move up to 147 to test himself against International Boxing Federation welterweight champion Errol ‘The Truth’ Spence Jr. (24-0, 21 KOs).

Ringstar promoter Richard Schaefer says Mikey’s decision to vacate his IBF 135 lb title was made so that he could dare himself to be great by facing Spence. Had Garcia kept his IBF lightweight title, he would have had to defend it against mandatory challenger Richard Commey, a fighter that had already been beaten by Robert Easter Jr. Mikey is coming off of an easy 12 round unanimous decision win over Easter Jr. last July. Mikey would have gained little in defending the IBF lightweight title against Easter Jr. victim Commey.

“For Mikey to get motivated after already having achieved so much, he really wants to test himself,” Schaefer said to ESPN.com. “He wants to dare to be great and the fight with Spence is the fight he told me he wants to pursue and that’s the fight we are pursuing.”

Mikey left open the possibility of returning to the lightweight division to defend his WBC title. Whether he’ll do so largely depends on how well he performs against Spence in 2019. That fight still has yet to be made. It’s going to take a lot of work for it to be out together, considering how tough a negotiator Mikey is. He failed to get the fight with Jorge Linares. He wanted that fight, but it didn’t happen.

Easter Jr. won’t be too happy to watch Commey, a fighter he defeated in 2016, competing against #3 IBF Isa Chaniev for the vacant IBF lightweight title. Easter Jr. is rated #6 with the IBF now, and he likely would beat both of those guys if he was given the chance to fight for his old belt. Easter Jr. will need to get in line now and wait for him to get ranked high enough for him to face the winner of the Commey vs. Chaniev fight. It won’t be surprising if Easter Jr. is forced to wait until he becomes the IBF mandatory before he finally gets a crack at the lightweight title. If Mikey loses to Spence, he might drop back down and go after his vacated IBF title. Easter Jr. would be out of luck if Mikey jumps back in line to go after the IBF title. Whoever emerges as the champion in the Commey-Chaniev fight will jump at the chance to defend the belt against the highly popular Mikey rather than Easter Jr. It might be better for Easter Jr. to go after WBA champion Vasyl Lomachenko.

“I met with Mikey and the fact is Mikey is not the kind of guy to say something for the heck of it,”. Schaefer said. “When he said he wanted to fight Spence and that it was the fight that motivated him and excited him, he was serious.”

Mikey would do well if he stayed at lightweight and occasionally moved up to 140 to face vulnerable champions from time to time. Mikey did well in beating Sergey Lipinets earlier this year in March to win the IBF light welterweight title. If Mikey had fought one of the other champions like Jose Ramirez or interim WBC light welterweight champion Regis Prograis, he might have lost. Lipinets was a flawed champion at 140, so Mikey was able to move up to the light welterweight division to take advantage of his vulnerability.

In moving up to 147 to fight Errol Spence Jr., Mikey is putting himself in a situation where he could get slaughtered. A wiser move would be for Mikey to move up to 147 to face a weaker champion like WBA ‘regular’ champion Manny Pacquiao or WBC champion Shawn Porter.

If nothing else, Mikey will get a big payday in the Spence fight. Assuming it’s a total massacre with Spence destroying Mikey, he can move back down to lightweight and continue to have success in that weight class. However, there will be huge pressure on Mikey to fight WBA champion Vasyl Lomachenko if he chooses to stay in the weight class. Mikey won’t be able to stay at lightweight without eventually being forced to take the fight against the tough Ukrainian fighter Lomachenko. The perception many boxing fans have is Mikey doesn’t want the Lomachenko fight because he’s all wrong for him.