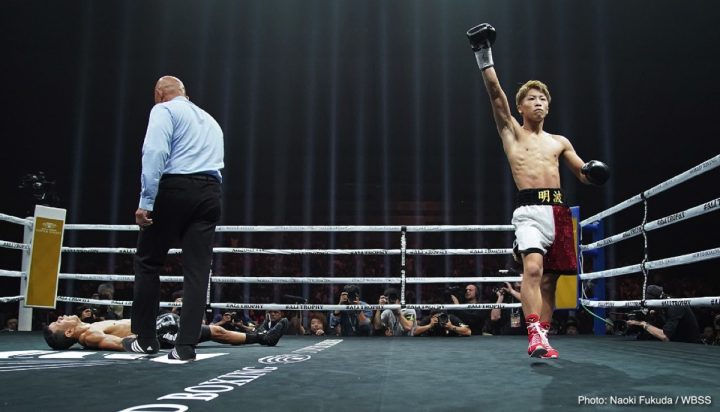 Inoue landed just two punches in the fight to get the knockout, but that’s all he needed. Payano was clearly over-matched from the moment the fight was signed, and didn’t belong in the World Boxing Super Series tournament.

The 25-year-old Inoue hit Payano with a long left jab followed by a lightning fast right hand that hit him squarely on the jaw, sending him straight down on the canvas. Payano was too hurt to continue and the fight was stopped right away. The official time of the stoppage was at 1:10 of round one. Before the stoppage, Payano had landed one nice right hand to the head of Inoue. The shot backed the Japanese fighter off, making him cautious and not interested in throwing a lot of punches.

Inoue played it safe until connecting with a simple jab followed by a big right hand that Payano wasn’t expecting. The speed of the right hand from Inoue was what hurt Payano. It wasn’t so much the power, but the speed of how quickly Inoue let loose with the right hand shot. Payano clearly wasn’t expecting to get hit from a power shot from Inoue because the Japanese fighter was so far on the outside. As it was, Inoue had to lean far forward to hit Payano with his long jab. Inoue then quickly stepped forward to land a big right hand that knocked Payano out cold.

It was a good victory for Inoue over the 34-year-old Payano. However, Inoue was always expected to blow out Payano, who lost his WBA bantamweight title two years ago in losing a 12 round split decision to American Rau’she Warren in 2016. Inoue is expected to win the World Boxing Super Series tournament. Inoue might have problems with Zolani Tete and Emmanuel Rodriguez. Those guys aren’t going to just roll over for Inoue like Payano did. Inoue is likely going to need to take a lot of hard shots from those guys to get the win, and the boxing fans are going to find out if he has a chin or not. Inoue doesn’t always look good like he did tonight. David Carmona gave Inoue a lot of problems in their fight in 2016. Inoue is not the same kind of fighter when he’s taken into the deeper rounds. Rodriguez and Tete are going to likely still be around in the championship rounds against Inoue, and we may find out that he’s not the same fighter when he’s facing quality guys compared to flawed old guys like Payano.

Against guys like Payano and Jamie McDonniell, Inoue lives up to his nickname, ‘Monster’, but whether he can be the same kind of fighter against the best at 118 is the big question. We know that Inoue left the 115 pound tournament without fighting the cream of the division in Srisaket Sor Rungvisai, Khalid Yafai, Roman ‘Chocolatito’ Gonzalez, Carlos Cuadras, McWilliams Arroyo, Juan Francisco Estrada and Donnie Nietes. Those are the talented fighters at super flyweight. Inoue was fighting the lesser guys like Yoan Boyeaux, Antonio Nieves, Ricardo Rodriguez, Kohei Kono, Karoon Jarupianlerd, Warlito Parrenas, David Carmona, and Omar Andres Narvaez. Those fighters are nowhere near the level of the talented guys at super flyweight. Inoue’s handlers matched him well when he fought at super flyweight in keeping him away from the talented guys. Now we’re seeing the same thing with Inoue in moving up to 118. In Inoue’s two fights at super flyweight, he’s beaten old timer Payano and Jamie McDonnell. Those are not the talented guys in the bantamweight division. Inoue did the same thing when he fought at light flyweight. Inoue didn’t face the good fighters before leaving the division. As such, we don’t know how Inoue will respond when he faces Tete and Rodriguez in the World Boxing Super Series tournament at 118. For all we know, Inoue could implode and be exposed once he starts getting hit by guys with power and talent. Carmona gave Inoue all kinds of problems in 2016. Carmona is a fighter that is one step down from the talented guys at super flyweight.