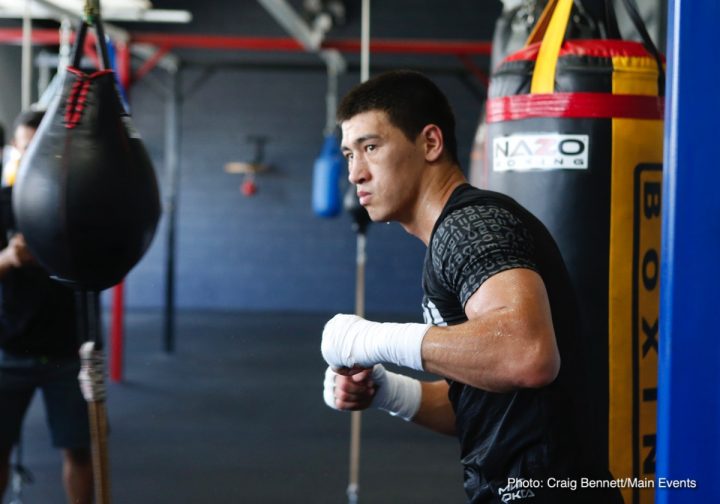 This is a bad fight for HBO to be televising on their network before they go out of the boxing business after 45 years. You would think that HBO would want to go out on a high by broadcasting a big fight that the boxing fans want to see, but they’re not doing that with Bivol vs. Pascal. This fight is a such a bad mismatch that it’s almost unfair.

The fight gives Bivol a chance to beat a guy with a name in Pascal to ad his name to his resume. It’s not an ideal situation for Bivol, given how shot Pascal is, and the fact that he’s not a big name with the casual boxing fans in the U.S, which is where the Russian Dmitry is trying to become a star. The hardcore boxing fans in the States are familiar with Pascal, and they know that he’s an over-the-hill guy. It’s the wrong time for Bivol to be fighting Pascal, because he’s not going to impress the hardcore boxing fans by beating him. Sergey Kovalev has already stopped Pascal twice, and Eleider Alvarez and Carl Froch both beat him by decisions. For the most part, the fans gave up on Pascal after his two losses to Kovalev. Bivol isn’t going to get much of a bump in popularity by fighting Pascal at this point. He might as well fight the guy that beat Pascal in Kovalev if he wants to pick an old timer on his way out of the sport. The only way Bivol can impress boxing fans against Pascal is if he knocks him out in the first three rounds. If it takes Bivol six or more rounds to knockout Pascal, he’ll have done no more than what Kovalev did in stopping him.

“It’s very important for me. It’s every boxer’s dream to be the champion, the unified champion,” Bivol said. “It’s a big step to dream about. Like Oleksandr Usyk.”

Bivol’s wins over Sullivan Barrera and Isaac Chilemba in 2018 showed that he’s got the skills to beat anyone in the light heavyweight division right now. He dominated those two fighters in a way that no one else had, not even Andre Ward. Adding Pascal’s name to his growing list of wins won’t do much to help his popularity. Bivol needs to be able to fight the best guys in this era for him to increase his popularity, and that means he needs to face Adonis Stevenson, Badou Jack, Artur Beterbiev, Marcus Browne, Sergey Kovalev and Anthony Yarde.

It would be a big accomplishment for Bivol to unify the light heavyweight division, but it may prove to be impossible to do. WBC champion Adonis Stevenson has been reluctant to fight the other champions at 175, and if he loses his belt to the Top Rank promoted Oleksandr Usyk. If he loses his WBC title to Oleksandr Gvozdyk in thier fight on December 1, then that won’t solve Bivol’s problem of his inability to unify the 175 lb division. Top Rank likely won’t let Gvozdyk anywhere near a talented fighter like Bivol, because they’ll almost surely have him milk his title against other Top Rank fighters in the same way they’ve got WBO welterweight champion Terence Crawford milking his title against their own fighters.

This is not a great defense for the 27-year-old Bivol. Pascal, 35, used to be a good fighter earlier in his career, but he’s halfway to 40 now, and not the guy he was five years ago. Bivol would likely have dominated Pascal even in his prime. But with Pascal being past his prime, it’s not going to end well for him.

“Not too long ago, Pascal fought for three world titles and I watched on TV,” Bivol said. ”Now he wants to take my title away, and I am very happy to accept this challenge and look forward to my next title defense on HBO.”

Pascal is always game and looking to put everything he has in trying to win a fight. Pascal seems to lose focus when facing guys with punching power and talent. Sergey Kovalev broke Pascal with pressure and his punching power. Kovalev stopped Pascal in the 8th round in their first fight in 2015 A year later, Kovalev fought Pascal in a rematch in 2016 and stopped him in the 7th round.

There really wasn’t any point in a rematch between the two taking place, but Kovalev’s promoters at Main Events wanted to make the fight, but it turned out to be a waste of time because it was an even more one-sided fight than the previous one. The boxing public at the time were turned off at seeing a needless rematch between Kovalev and Pascal, because the first fight had been a mismatch. Not surprisingly, Kovalev dominated Pascal just as easily in the rematch as he had in the first fight and wound up stopping him in the 7th round. Pascal looked totally shot as a fighter in the second match with Kovalev.

Pascal has turned things around somewhat since his second loss to Kovalev. In Pascal’s last four fights, he’s only lost once in losing a 12 round unanimous decision to Eleider Alvarez in 2017. Pascal’s wins have come against less than the best unfortunately. His wins have come against Ahmed Elbiali, Steve Bosse (1-0) and Ricardo Marcelo Ramallo (21-10-1). It’s hard to get excited about Pascal’s wins over those fighters because they were basically prospects and journeyman level fighters with the exception of Elbiali, who was little more than a guy with an inflated resume built on weak opposition.

WBC super bantamweight champion Miguel ‘Alacran’ Berchelt (34-1, 30 KOs) wants to show challenger Miguel ‘Mickey’ Roman (50-12, 47 KOs) that you don’t have to do a lot of talking to win on November 3 at the Don Haskins Convention Center in El Paso, Texas.

Berchelt, 26, is making his fourth defense of his World Boxing Council super featherweight title. Roman, 32, might not be the toughest challenger during his reign as the WBC champion. Berchelt’s fight against Takashi Miura last year in July 2017. Berchelt did a great job of neutralizing Miura’s punching power by boxing him. Still, Berchelt stood and punched with Miura at times, and was even hurt by him once. But for the most part, Berchelt dominated Miura in beating him by a one-sided 12 round unanimous decision. In contrast, Roman was punished by Miura in losing to him by a 12th round knockout in January 2017. The difference between how Berchelt did against Miura and how Roman did is dramatically different. If you go by how Berchelt and Roman did against a common opponent, you can draw only one conclusion about which of the two are going to win their fight on November 3. The younger fighter Berchelt is going to beat Roman and make it look easy.

“We are going very well, but we must not slow the pace and arrive with the best condition and strength of my career,” Beltran said to wbcboxing.com. “I want to show you is the best super featherweight in the world and I want to teach Mickey that you do not have to talk that much, but show it in the ring,” Beltran said.


« Jason Moloney Q&A: ‘Now I get my chance to achieve my dream and become a world champion’