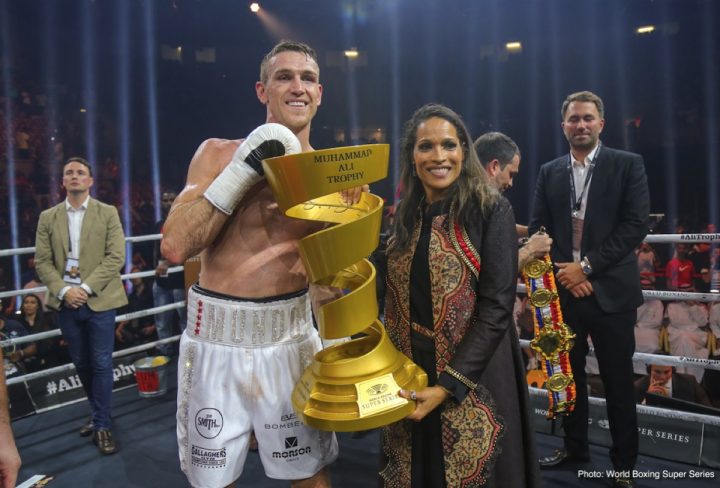 Smith (25-0, 18 KOs) doesn’t have an opponent picked out yet, but it’s likely going to be someone ranked in the top 15 by the World Boxing Association.

Although Smith says he wants to fight the other 168 pound champions David Benavidez, Jose Uzcategui and Gilberto ‘Zurdo’ Ramirez, his next fight will likely be a voluntary defense against one of these fighters:

John Ryder (26-4, 14 KOs) would have to be viewed as the most likely name on that list to be be Callum’s opponent for his next fight in Liverpool. That fight is a no-brainer. Ryder, 30, is from London, UK, and is well known with British hardcore boxing fans. He has recent wins over Jamie Cox and Patrick Nielsen. Ryder has losses to Rocky Fielding, Jack Arnfield, Nick Blackwell and Billy Joe Saunders. That would be a good first defense for Callum, and an easy fight to make. Chris Eubank Jr. would be the best of the bunch, but it’s not a fight that has any realistic chance of being made at this time. Eubank Jr. is likely going to take on James DeGale next, and then potentially go after WBA ‘regular’ super middleweight champion Rocky Fielding.

“The dream has always been to fight at Anfield,” said Smith to skysports.com. “I’ve done my part, I’ve brought a world title back, and they have just got a licence to have other events, so it could be meant to be. I’ll be on the phone to Eddie Hearn, asking for my next fight to be at Anfield, and to defend the world title. That can be another box ticked off the bucket list,” Smith said.

Smith says he wants to face World Boxing Council super middleweight champion David Benavidez, and it’s a doable fight. If Smith’s promoter Eddie Hearn wants to make the Benavidez fight, he can probably do so at anytime. It’s up to Hearn and Smith how soon they want to take on the lion’s in the division. Beating 30-year-old Groves was a good start, but he’s getting up there in age and was coming off of a bad shoulder injury. Groves looked like he tweaked it in the 2nd round last Friday. Groves never had the snap and power on his left hand that he had in his previous fights. There was clearly something wrong with the shoulder, and that left him throwing slow lefts and being almost totally reliant on his right hand. Groves was never going to be able to beat a fighter in Smith’s class using just his right hand. He absolutely needed his powerful left jab to have a chance of winning the fight, but that couldn’t happen due to his shoulder problem.

Smith wants to prove to the boxing world that he’s the best fighter in the super middleweight division. He’s going to need help from his promoter for him to have a chance of proving that. Hearn has got to want to let Smith make those fights.

“If you ask people who the best in the world is – I want everyone’s answer to be Callum Smith. That’s the plan, to unify the division,” Smith said.

Smith has his work cut out for him if he wants to unify the division. It’s going to take a long time to make those fights.