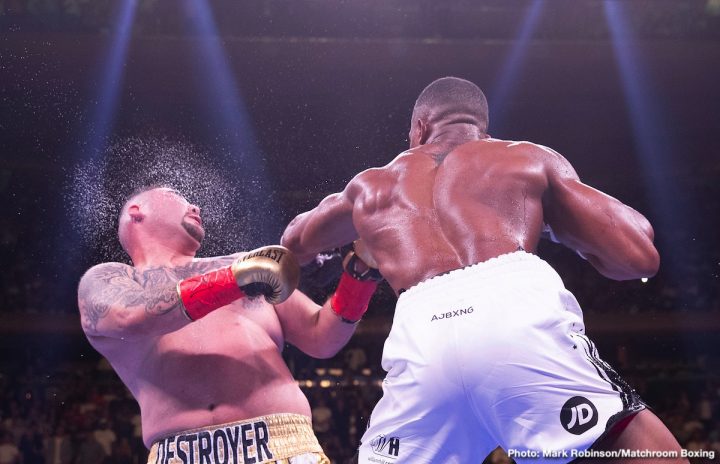 By Jeff Aranow: George Groves wants Anthony Joshua to step back into the ring and face Andy Ruiz Jr. in an immediate rematch without letting any time go by. Groves feels that Joshua (22-1, 21 KOs) wasn’t fully “switched on” for the fight for whatever reason last Saturday night when he got worked over for seven rounds by Ruiz.

Groves suspects that Joshua was thinking other stuff in the background, and not giving Ruiz Jr. (33-1, 22 KOs) his full attention last Saturday night at Madison Square Garden in New York. As such, Ruiz Jr. dropped him four times, and stopped him in the seventh to become the new IBF/WBA/WBO heavyweight champion.

“He didn’t look up for it. The ring walk was very casual,” said Groves to IFL TV. “He looked laid back. He didn’t look up for it. He drops Ruiz, and thinks the fight is over. He relaxed a bit too much. He gets caught. He’s such a big puncher that he doesn’t need to develop those other aspects to his game. He will now have to do that, because his vulnerabilities have been exposed,” said Groves.

There’s a lot of chatter going on in social media about how Joshua supposedly was knocked out in sparring by the hard hitting Joey Dawejko. If there’s any truth to that rumor, then it would explain why Joshua had problems against Ruiz. Getting knocked out badly in the week of the fight, it would be difficult for any fighter to be 100%. Ricky Hatton was rumored to have been knocked out in sparring in training for his fight with Manny Pacquiao in 2009, and he only lasted two rounds against the superstar from the Philippines.

Something wasn’t right with Joshua the moment he made his ring-walk. He looked like he didn’t want to be there. It hard to have been hard for Joshua to get up mentally for the fight to begin with. No one was giving Ruiz any chance at all of winning. He was being judges by his physique, and it thought that it would be a walk in the park for AJ. Joshua got caught up with all, and he spent the last two weeks talking about Deontay Wilder and Tyson Fury instead of Ruiz. That was a sign right there that Joshua wasn’t taking Andy seriously, which as it turns out was a mistake.

Joshua getting knocked cold in sparring makes sense as excuse for his poor performance. However, Joshua’s promoter Eddie Hearn is reportedly denying these three things:

– He suffered a panic attack before the fight

– AJ was knocked cold in sparring

– He had suffered a recent a concussion

All of those problems would help explain why Joshua didn’t look like his old self against Ruiz. This should have been an easy fight for Joshua if he was the same guy that beat Alexander Povetkin, Joseph Parker or Carlos Takam.

“Ruiz was more experienced in the struggles,” said Groves. “A straight rematch. Bounce back, get your belts back. Straight into a rematch, because if he’s honest, he’ll know he wasn’t switched on. He wasn’t with it. He was concentrating on the wrong things. He needs to concentrate more on boxing,” said Groves.

If any other ex-fighter than Groves that was saying that Joshua should fight Ruiz in an immediate rematch, then you would have to agree that it would be a good idea. Unfortunately, Groves is living proof that the worst thing you can do is fight an immediate rematch against an opponent that previously knocked you out. Groves fought Carl Froch in an immediate rematch in May 2014, and was knocked out in the eighth round. Just six months earlier, Froch had stopped Groves in the ninth ground in November 2013.

Groves thought it was a good idea to fight Froch in an immediate rematch in 2014, and it backfired on him with Carl knocking him out cold in the eighth round. Would the outcome been different if Groves waited a year before fighting Froch again? Possibly. We’ll never know though, as Groves took the rematch immediately, and was wiped out by Froch in a brutal knockout. Groves’ tactics were wrong in that fight. He made the same mistake Lucian Bute did in backing up against the ropes, and letting Froch come forward to nail him with shots.

“Maybe he might need to make some internal changes with his career or make some additions,” said Groves. “His tactics were wrong. He was moving away from Ruiz when a man that big, that strong and with that much power, he could have taken the center of the ring and made Ruiz figure out how to close down Anthony Joshua. It looked like it was going to be a quick and early finish. He took his eye off the ball, and he got caught,” said Groves.

The obvious change that Joshua can make is with his trainer Rob McCracken. Joshua hasn’t been improving as a fighter since he turned pro. In looking at old video from 2013, Joshua looks like a better fighter then compared to now. His defense hasn’t improved, he’s not throwing jabs, he lacks head movement, and stamina is beyond terrible. The young George Foreman had poor stamina, but he was still capable of fighting hard for six or seven rounds before he gassed out.

Joshua is gassing after three rounds. That’s unsatisfactory. Since McCracken is the captain of the ship in terms of being the one that trains Joshua, you have to put the blame on him for what happened last Saturday night. Joshua needs to explore the possibility of switching out McCracken in favor of a different trainer. He needs to choose wisely, because some of the so-called great trainers clearly aren’t as good as people think.

“There is a good chance now for him to go away and make some improvements, and get some hunger back,” said Groves. “It’s a cruel thing to say a fighter quit. There was an element of that. I felt that at the time as well. That’s a mental thing to quit. It’s not a physical thing. I hope it’s not because he’s never had to strive for things like other fighters have. He has a rematch clause. It seemed like he’d had enough. He didn’t seem that hurt, but it’s hard to tell. If he does go back in a straight rematch, that element of quit, he can right that wrong,” said Groves.

If Joshua did quit in the fight, it could lead to him quitting again. As the saying goes, ‘Once a quitter always a quitter.’ If a rematch does take place, Ruiz could start in where he left off and have Joshua in the position he was in last Saturday when he appeared to quit in the seventh.

There’s an element of risk involved in Joshua fighting Ruiz immediately without taking some tune-ups first. Groves didn’t touch on the possibility that Joshua’s confidence may have been shattered by what happened to him in the Ruiz fight, and perhaps what may or may not have taken place during the sparring before the contest. Joshua isn’t going to get his confidence back unless he can take some confidence builder type fights against weak opposition. Historically, fighters are put in against soft touches after they’ve been beaten in order to get them used to winning again. It works. There’s nothing wrong with Joshua doing what other fighters have done.


« Brand or Boxer? Is Anthony Joshua the David Beckham of Boxing?

Archie Sharp vs. Jordan McCorry on July 13 in London, UK »