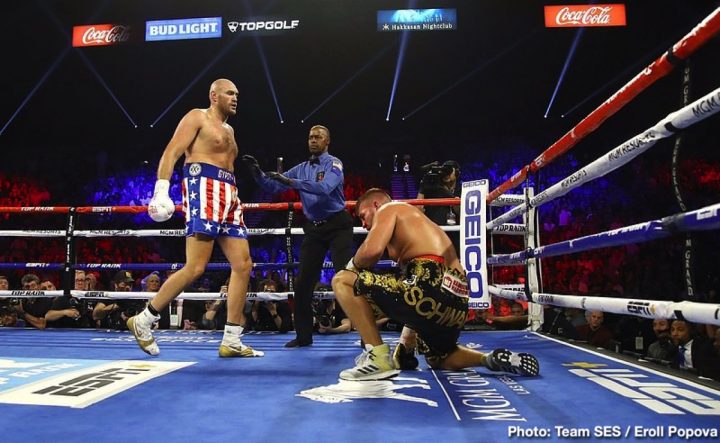 By Mark Eisner: George Groves says he thinks WBC heavyweight champion Deontay Wilder might knock Tyson Fury down hard enough to where he won’t be able to get back up in the rematch. Groves notes the increased weight that Wilder has put on lately has him punching with more authority, and he doesn’t think Fury will be able to mentally psych him out like did last September.

“Six months ago I would have had said Joshua [is the best heavyweight in the division]. Now he’s not champion no more,” said Groves to Fighthype. “You can’t say Ruiz [is the #1 heavyweight], because I think there’s a dozen people out there that beat him. After this latest performance, I’d say Wilder. Wilder is the most impressive.”

It’s hard not to say that Wilder is the best heavyweight in the division right now based off his first round knockout win over Breazeale. But – surprisingly – many in the boxing world are rating Fury above Wilder after his second round knockout win over Tom Schwarz (24-1, 16 KOs) lat Saturday night in Las Vegas, Nevada. There’s still some fans that rate Wilder at #1, but a good portion of the world is now viewing Fury (28-0-1, 20 KOs) as the best heavyweight in the division.

“I feel Fury is fantastic at getting into opponent’s heads, and that always has a bearing on his fights,” said Groves. “I don’t know if he can get into Wilder’s head the same again in the rematch. If he didn’t, and Wilder comes in heavier like he did against [Dominic] Breazeale a couple of weeks ago, then it’ll be a different fight, because he [Fury] might not get up from those knockdowns,” said Groves.

Wilder looked like he had figured Fury out in the championship rounds last December. Although Fury was hitting Wilder with slapping shots, he was getting hit repeatedly by punches that were wearing him down. Fury did an excellent job of rolling with a many of the shots, but he was still getting hit hard by Wilder from time to time.

Deontay understands how to get to Fury’s chin, and could stop him this time. Wilder’s weight has gone up, and he’s heavier now than when he fought Fury last December. He weighed only 212 pounds for that fight. Against Breazeale, Wilder weighed 223 pounds. Wilder will probably gain more weight for his next fight against Luis Ortiz, and knock him out quickly too.

“Anthony Joshua is a man mountain. He’s huge,” said Groves. ” probably the hardest puncher in the world. I still believe he beats Ruiz in the rematch. Something wasn’t right with him. Whatever it was. He wasn’t switched on, and took it too lightly. If he’s switched on, I believe he beats Ruiz. Ruiz is a good fighter with a good amateur record, but he’s still 6’2″ and morbidly obese. I think he [Joshua] wins the rematch,” said Groves.

Joshua’s loss looked to be the result of him getting hit with a left hand counter punch from Ruiz in the third round. AJ had knocked Ruiz down moments before with a left hook to the head. Joshua thought he had Ruiz there for the taking, and he left himself open when he tried to finish him. Once Ruiz wobbled Joshua with a left hook, he never recovered. Ruiz took advantage of Joshua being hurt by hitting him with combinations that he couldn’t defend against. Joshua’s trainer Rob McCraken was telling him to stay on the outside and jab, but it wasn’t effective at keep the 6’2″ Ruiz off of him.

“I know Joshua is a loyal guy, but sometimes you have to make those touch sacrifices,” said Groves about Joshua possibly needing to switch out his trainer Rob McCracken. “I don’t know what changes he needs to make. It might be the mentality. He might have overlooked Ruiz. He was a late change of opponent. Ruiz came in at five weeks. He [Joshua] talked about Deontay Wilder all week. He wasn’t switched on, but something definitely needs to change, whether it’s something with Joshua or something with his team,” said Groves.

Joshua might stay loyal to his trainer McCracken until the end of his career. The only way Joshua might choose to dump McCracken is if he starts suffering repeated losses. However, if gets to that point, a change of trainer likely won’t do much. Joshua’s problem may be beyond fixing, because his stamina and punch resistance aren’t what they should be for him to be able to stay at the top of the division for a prolonged period of time. Ruiz took advantage of both of those flaws in beating him by a seventh round knockout. Dumping McCracken might not fix the problem.

Groves says Fury’s match with Schwarz was a “gimme fight”

“He done the job that was asked of him. It was a gimme fight, let’s be honest,” said Groves to IFL TV about the Fury vs. Schwarz fight. “He didn’t waste time.” 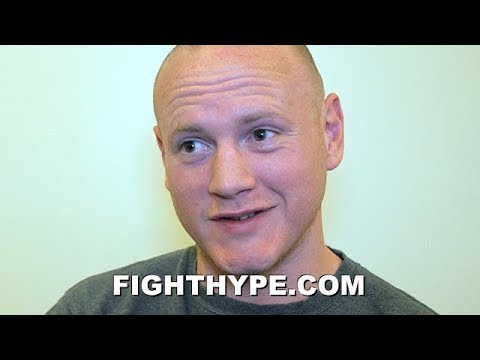 
« Khan: It could be Pacquiao after Goyat