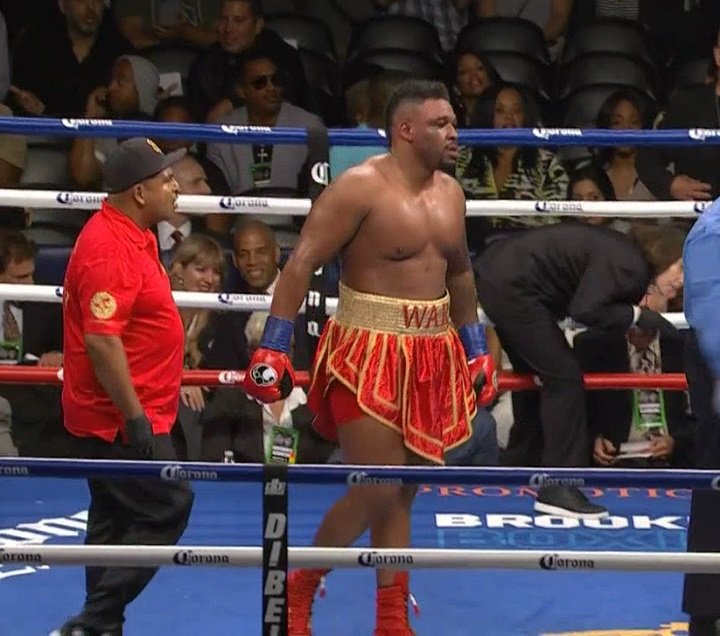 By Jim Dower: Jarrell ‘Big Baby’ Miller will be fighting Tomasz Adamek this Saturday night on DAZN at the Wintrust Arena in Chicago, Illinois.

This is a fight that Miller and his manager Dmitry Salita hope will be a springboard to them getting a fight for the vacant World Boxing Association heavyweight title against Fres Oquendo in December.

If Miller wins that fight against Oquendo, his next goal will be to fight unification match against IBF/WBA/WBO heavyweight champion Anthony Joshua (22-0, 21 KOs) on April 13 at Wembley Stadium in London, England. Miller (21-0-1, 18 KOs) is the favorite to beat the 41-year-old former two division world champion Adamek (53-5, 31 KOs) on Saturday night on the Jessie Vargas vs. Thomas Dulorme card.

“We hope [to fight for the WBA ‘regular’ title] in December,” Salita said to skysports.com. “His goal is to collect the WBA’s other belt by taking Joshua’s ‘super’ title at Wembley Stadium on April 13, when the champion is scheduled to return. He is the mandatory, 100 per cent.”

Miller earned his World Boxing Association mandatory spot by picking up recent wins over Johann Duhaupas, Mariusz Wach, Gerald Washington and Fred Kassi. Miller, 30, has been winning, but he hasn’t always looked good in doing so. In Miller’s last fight against Duhaupas, he barely did enough to win. That was a close affair, even though the scores were lopsided in favor of ‘Big Baby.’ The scores were 119-109, 117-111 and 119-109. Miller has the ability to beat 41-year-old Adamek and 45-year-old Oquendo to win the vacant WBA heavyweight title. Manuel Charr, the current WBA champion, tested positive for a banned substance and is being stripped of his title.

“Jarrell is focused on making a statement, and ending this fight early. He wants to get rid of this guy,” Salita said.

With Miller being the WBA mandatory challenger, he doesn’t need to fight a good relevant heavyweight on Saturday. Old timer Adamek will do for the fight in what clearly a show case fight for ‘Big Baby. Miller’s promoter Eddie Hearn of Matchroom Boxing USA isn’t going to take any chances with Miller, as he wants him to win the vacant WBA title against inactive fighter Oquendo, 45, and then Joshua in a unification fight. Hearn hasn’t given a date yet for when he plans on making the Joshua vs. Miller fight, but it’s believed by may that it’ll take place in the second half of 2019. Joshua’s April 13 fight will in all probability be against Dillian Whyte, who Hearn promotes as well, and then AJ will meet up with Miller in the second part of the year. WBC heavyweight champion Deontay Wilder will be put off by Hearn to fight Joshua in a later year, possibly 2020 or 2021 if the two are still champions by that point in time.