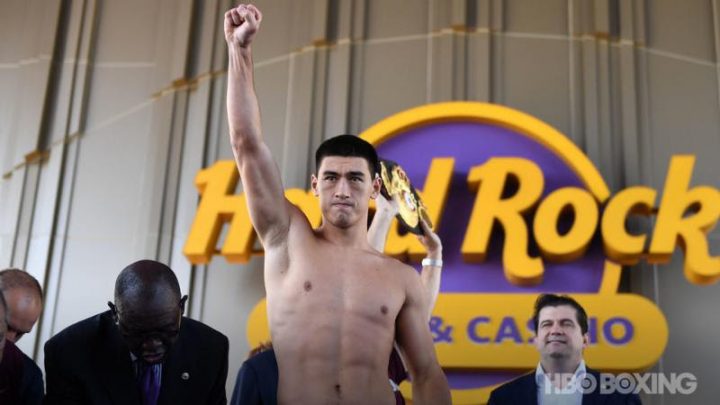 Although the 36-year-old Pascal has won his last two fights, he’s considered a huge underdog against the much younger and arguably more talented 27-year-old Bivol. Pascal has twice to Sergey Kovalev and been beaten by Eleider Alvarez in the last three years. There was a time where Pascal was considered among the best at 175, but not anymore. He’s gotten older and the light heavyweight division has gotten better.

Martin, 5’11”, Martin doesn’t realize what he’s up against in this fight. He’s facing a VERY popular fighter in 2012 Olympian Taylor, who will be fighting in front of his own loyal boxing fans in Glasgow on Saturday. That could mean as much as four to six rounds cushion that Taylor will have going for him right off the bat in the fight, which Martin will need to make up somehow. That’s not going to be easy given the boxing skills, size, power and talent that Taylor has going for him. Martin is trained by Abel Sanchez out of Big Bear, California. Sanchez will have a great game plan for Martin, but it’s going to be extremely hard for him to KO a guy with Taylor talent, power and chin. You can’t rule out a knockout for Martin, but it’s not likely to happen. Martin doesn’t possess the same pedigree that Taylor has going for him. The best opponent that Martin has faced during his 5-year pro career is Breidis Prescott. Martin beat Prescott by an eight round unanimous decision last May. Martin wasn’t able to stop Prescott, who isn’t in the same class as Taylor.

“I don’t mind fighting in Scotland, for me, it’s just another ring,” said Martin. “I need to go there and do what I do best; showcase my skills and come out victorious. I know Taylor is a good boxer but nothing overwhelming. I believe I’m faster, more athletic and just as strong as him. I think my speed is going to play a key difference.”

Martin hopes to make it to the final of the World Boxing Super Series tournament, but it’s going to take a mini miracle for Martin to beat Taylor. Can Martin win the fight? Yes, but it’s still highly unlikely that he will.

Last weekend, interim WBC light welterweight champion Regis Prograis defeated former WBO 135 lb champion Terry Flanagan by a 12 round unanimous decision in their quarterfinal fight at the Lakefront Arena in New Orleans, Lousiana. The win advances Prograis to the semifinals of the WBSS tournament to face WBA ‘regular” 140 lb champion Kiryl Relikh. Prograis is expectd to that fight to move to the final to face Josh Taylor, as long as he wins his fight against the 25-year-old Martin.

Adrien Broner: “I will be war ready” for Manny Pacquiao on January 19 »