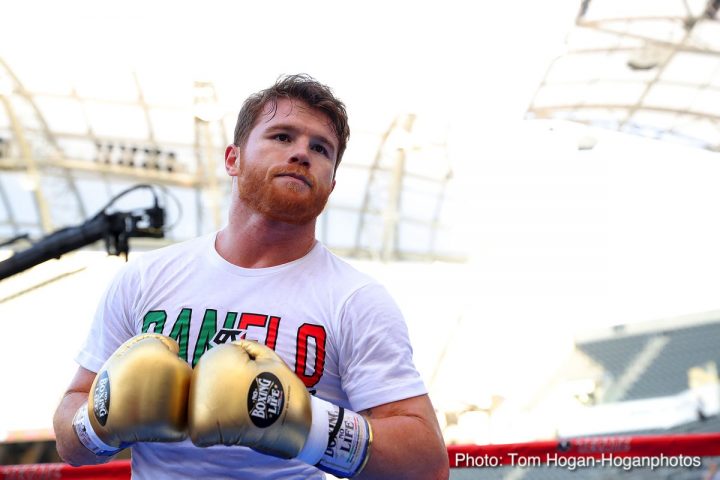 By Sean Jones: Gennady Golovkin, his trainer Abel Sanchez and his team rejected the gloves that Saul Canelo Alvarez wanted to wear for the September 15 rematch at the T-Mobile Arena in Las Vegas, Nevada. Sanchez and Team GGG didn’t want the 28-year-old Canelo using the gloves new gloves, as they had never been worn before during championship fight.

Sanchez was further concerned that the gloves might burst during the Golovkin fight, which would require a change of gloves for Canelo. Sanchez felt that the gloves change would give Canelo a badly needed rest break. Canelo showed in the previous fight with GGG that he needed lots of rest breaks in each round due to his fatigue problems. Canelo was often in a state of exhaustion after just one minute of each round.

It’s unclear how much padding the gloves have that Canelo wanted to wear. If the gloves had little padding, then that would be another reason why Golovkin and his team wouldn’t want him wearing his gloves of choice. Sanchez complained in the previous fight with Golovkin that Canelo was using an illegal hand-wrapping technique called ‘stacking,’ which isn’t allowed in many states in the U.S. Despite Sanchez’s unhappiness about the hand-wrapping, Canelo was able to use his method of having his hands wrapped because it’s not illegal in the Nevada.

“Notice that they were gloves that had never been used in a championship fight,” Sanchez said to ESPN Deportes about Canelo’s new gloves that he wanted to wear. ”We did not feel it was fair to use them because they had not been tested. We do not know if they are going to break. Imagine that they break in the third round and then Canelo takes advantage to recover or take a break,” Sanchez said.

Canelo getting a long rest break if his new gloves tore in the Golovkin rematch is the least worry. If the gloves tear and Canelo was hitting Golovkin with his unpadded knuckles, it could hurt him. That would be a real problem for Golovkin. Canelo will need to stick with a more established glove brand for the Golovkin rematch. At least if Canelo uses normal gloves, he’ll get credit if he beats Golovkin. If Canelo defeats Golovkin using his untested gloves, he would be viewed as someone who got over based on his gloves rather than on what he did himself. Canelo already is seen by a lot of boxing fans as being undeserving of the 12 round draw that he was given in his fight against GGG last September. Many fans think that the Nevada State Athletic Commission assigned judges gave Canelo a rematch due to his popularity rather than what he did inside the ring in the fight.

“And that they want another dressing room, because we make a lot of noise … to cry and cry and more to cry with those people,” Canelo said to ESPN Deportes in response to Team Golovkin’s objection to his gloves for the rematch.

Canelo should be thinking of doing whatever he can to accommodate Golovkin and his team, because it won’t look good if he’s using gloves that haven’t been tested before in a major world title fight. Canelo doesn’t need the flak he’ll have to hear from boxing fans if he beats Golovkin and or if his gloves split during the fight and he has to have them replaced with another pair.

With 13 days to go before the rematch, Golovkin is still the favorite to beat Canelo in betting circles. Golovkin started out as a favorite to beat the smaller Canelo, and he’s held to that. The odds are expected to narrow as the fight draws nearer, but Golovkin is still expected to be the favorite by the time the fight starts. The odds-makers see Canelo as not having done enough in the first fight for them to be made the favorite. Canelo looked tired throughout the fight, and he was unable to throw enough punches to win the rounds without controversy. For Canelo to be made the favorite, he might need news of an injury or a sparring problem for Golovkin to surface that would cause the odds-makers to reverse their opinions of who should be the favorite. Canelo does have some things going for him in this fight. He’s faster, younger and fighting at his favorite venue at the T-Mobile Arena in Las Vegas, Nevada.

Lemieux: In less than two weeks, I’m knocking O’Sullivan into a new dimension

David Lemieux (39-4, 33 KOs) is counting the days before his fight on September 15 against Golden Boy Promotions fighter Gary ‘Spike’ O’Sullivan (28-2, 20 KOs) on the undercard of Saul Canelo Alvarez vs. Gennady Golovkin at the T-Mobile Arena in Las Vegas, Nevada. Lemieux, 29, says he’s going to knock the 34-year-old O’Sullivan into the next dimension when he gets him in the ring. Both guys have major punching power that would enable them to end the fight with a single well-placed punch. It’s a fight that has been difficult for the boxing public to predict a winner.

Less than 2 weeks until i knock @spike_osullivan into a new dimension 👊 September 15.

O’Sullivan doesn’t see Lemieux as being any problem for him to deal with in this fight despite the fact that he’s done more with his career than he has. Lemieux has captured a world title in previously holding down the IBF middleweight title, and he’s beaten better fighters in Hassan N’Dam, Gabriel Rosado, Curtis Stevens, Cristian Fabian Rios and Glen Tapia. The only name that O’Sullivan has on his resume that jumps out at you is Antoine Douglas, who he knocked out in seven rounds in December 2017. Douglas had previously been knocked out in the 10h round by Avtandil Khurtsidze. O’Sullivan’s win over Douglas doesn’t look nearly as good once you factor in the guys that he’s been beaten by.

Lemieux vs. O’Sullivan fight could boil down to which of the two lands their big shots first. If either of them lands cleanly, the fight will likely end right away.