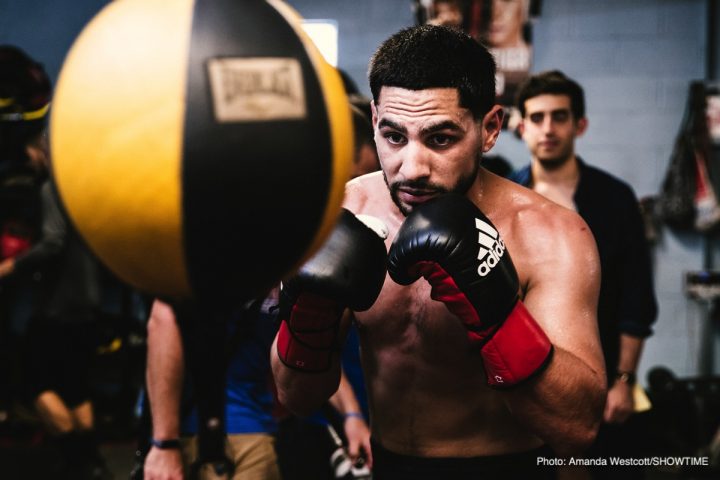 By Jeff Aranow: Danny Garcia is surprisingly the betting favorite to defeat former IBF welterweight champion Shawn Porter this Saturday on September 8 in their fight for the vacant World Boxing Council 147 pound title on PBC on Showtime at the Barclays Center in Brooklyn, New York.

While many fans feel that Porter (28-2-1, 17 KOs) will be too much for former two-division world champion Garcia (34-1, 20 KOs), the odds-makers think otherwise. They feel that Garcia will take the fight, and they have him as a 1.5 to 1 favorite to beat the 30-year-old Porter to win the WBC 147 pound title, which was recently stripped from Keith ‘One Time’ Thurman for being inactive for more than 12 months. Thurman says he vacated the WBC title, but the rumors are that it was stripped from him for inactivity. Thurman hasn’t fought in 18 months since beating Danny Garcia last year in March 2017.

It’s a big compliment to Garcia that the odds-makers have him as the favorite in this fight, because he’s not looked good in many of his fights in the past, and he’s clearly undeserving of being made the favorite over a quality fighter like Porter. Before Thurman was injured in the Garcia fight, he was making him look silly. It was so one-sided that it wasn’t even a fight. Thurman was leagues better than Garcia, and it was clear who was going to win the fight. Installing Garcia as the favorite doesn’t really mean much because he’s a guy that has underperformed plenty of times in the past in fights against non-top level fighters. Who can forget how much trouble Ashley Theophane gave Garcia in 2010, and Mauricio Herrera in 2014. Those were fights that Garcia almost lost. Herrera won the fight against Garcia in the eyes of a lot of fans.

Garcia lost his WBC welterweight title last year in getting beaten by Thurman. Garcia’s trainer Angel Garcia thinks his fighter, who happens to be his son, deserved the victory in that fight. The boxing public didn’t agree with that opinion. They had Thurman winning the fight. Danny was hoping he would have already fought Thurman in a rematch for the WBC welterweight title. Unfortunately for Garcia, Thurman suffered an elbow injury that required surgery and it’s been difficult for him to come back from that. Garcia recently took a stay busy fight against former WBA lightweight champion Brandon ‘Bam Bam’ Rios on February 17. Garcia dominated the fight until halting Rios in the 9th round. Garcia dominated, but he took a lot of shots in the fight from the determined Rios.

Garcia previously captured the vacant WBC welterweight title in January 2016 in beating Robert Guerrero by a 12 round unanimous decision. Garcia didn’t do much with the WBC title in terms of title defenses. He fought Samuel Vargas in November 2016 in a non-title fight with his WBC not up for grabs. After that fight, Garcia fought Thurman in a unification fight and wound up losing his WBC title to him.

If Garcia beats Porter, he’s going to have a lot of options available for big money fights starting with a rematch with Thurman. That fight is doubtful right off the bat, because Thurman is going to want to take at least one tune-up before he faces someone good due to his long time out of the ring. Garcia will have the option of fighting these guys if he can beat Porter to win the WBC welterweight strap: Manny Pacquiao, Errol Spence Jr., Terence Crawford, Amir Khan and Mikey Garcia. Garcia will be able to pick and choose which one of those interesting fights that he wants. Mikey Garcia would be an interesting fight for Danny. Garcia would need to get to Mikey before IBF welterweight champion Spence does, since he’s interested in facing him.

Amir ‘King’ Khan (32-4, 20 KOs) is a heavy favorite to defeat fringe contender Samuel Vargas (29-3-2, 14 KOs) this Saturday on September 8 at the Arena Birmingham, in Birmingham, England. Khan believes he’s just now hitting the prime of his career at 31. Khan is a 16 to 1 favorite to beat Vargas. This is the second fight for Khan under the help of Matchroom Boxing promoter Eddie Hearn.

Vargas hasn’t beaten anyone good enough during his career for him to be seen as the favorite. Vargas is the younger fighter than Khan at 29, but he’s lost when he’s stepped it up against Errol Spence Jr. and Danny Garcia. However, Khan isn’t in the same league as those two, so there’s a chance that Vargas might pull off an upset if he can connect with something big on Amir’s chin.

Whether Khan is or isn’t in the prime of his career is unclear. He’s only fought once since coming back from a 2-year layoff from 2016 to 2018. Khan defeated Phil Lo Greco by a 1st round knockout last April. Khan looked good against a lower level fighter. A lot of Khan’s boxing fans made a big deal about how he stopped Lo Greco faster than Errol Spence Jr. did in 2015. Spence stopped Lo Greco in the 3rd round. Khan also did a better job beating Lo Greco than Shawn Porter did with him going the full 10 rounds in 2013 in beating him by a decision. However, those two fighters fought Lo Greco when he was younger, and they weren’t going all out to stop him right away the way Khan did.

If Khan beats Vargas, there’s a possibility that his next bout will be a big fight against Manny Pacquiao in December. Khan’s promoter Eddie Hearn is trying to negotiate the fight with Pacquiao. It’s going to be a tough one to put together though. Khan might end up facing Kell Brook instead in December. That’s the easier fight to put together because both guys are with Hearn’s Matchroom Sport promotional company. Brook is easier to negotiate with than Pacquiao, who will require a big purse. Vargas has a chance to be the spoiler in beating Khan and ruining his dreams of fighting Pacquiao. The fight with Brook will still happen for Khan regardless if he gets beaten by Vargas, but it won’t be the fight that it would have been.