Martirosyan: Canelo has a shot at beating GGG 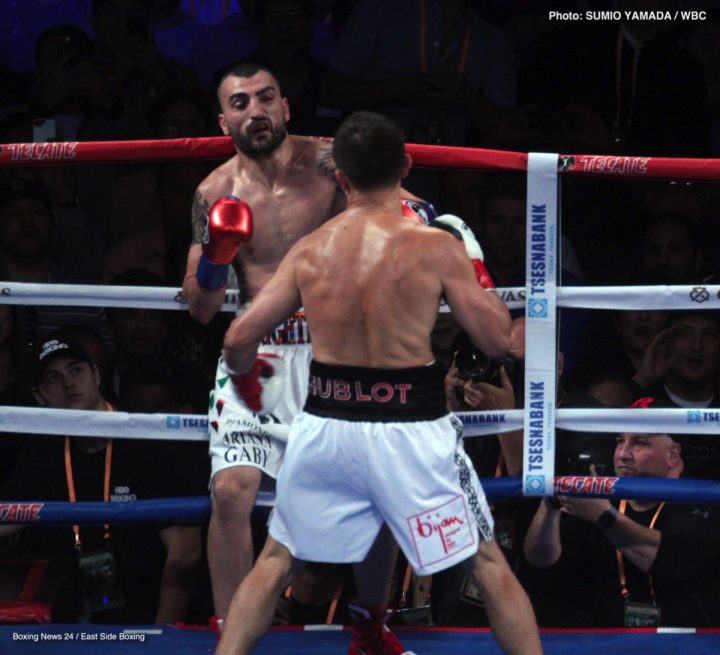 By Sean Jones: Vanes Martirosyan says Saul Canelo Alvarez has a shot at beating IBO/WBA/WBC middleweight champion Gennady ‘GGG’ Golovkin in their rematch on September 15. Martirosyan (36-4-1, 21 KOs) is coming off of a 2nd round knockout loss to Golovkin on May 5.

Despite not lasting long, Martirosyan buzzed GGG with a hard right hand in round 1 and it he surprised a lot of boxing fans. However, Martirosyan’s brief bit of success against Golovkin proved to be short lived, as was dropped by him in round 2 and stopped at 1:53 of the round.

Martirosyan seems to believe the 27-year-old Canelo has a chance at beating the 36-year-old Golovkin due to the age of the Kazakhstan fighter.

”Canelo looking good in Camp He has a Shot but GGG is the best right now It’s gonna be good fight I think it ends in KO,” Martirosyan said. ”Trust me age is a factor In Boxing!”

It sounds like Martirosyan has sour grapes about being knocked out by Golovkin.

Canelo’s size loss could make it tough for him to beat the bigger, stronger Golovkin. Canelo has taken off a lot of muscle weight since his previous fight against Golovkin. It appears that Canelo is hoping that by being smaller, he’ll be able to improve his stamina enough for him to beat Golovkin this time. Canelo ran out of gas after the 2nd round in the first Golovkin fight, and was dominated by him for the remaining 10 rounds. The judges scored the fight a controversial 12 round draw, but it’s believed by the majority of the boxing public that Golovkin won the fight by four rounds.

Canelo’s attempt at improving his stamina by taking off muscle weight may problem to be fruitless, as he’s always had poor stamina since he first turned pro in 2005. Canelo has always fought in spurts, and needed rest breaks to recover. Golovkin is the opposite type of fighter. He applies constant pressure on his opponents, and forced them to work the full three minutes whether they want to or not. Golovkin doesn’t need rest breaks. He’s capable of fighting a full 36 minutes of a 12 round bout. In contrast, Canelo fights hard for 12 minutes of each round 12 round. He always fights hard in the first minute of every round, and then rests for the next two minutes.

As for the 32-year-old Martirosyan’s next fight, he says he was contacted this week to fight former two-time middleweight world tile challenger Willie Monroe Jr. (22-3, 6 KOs) as a replacement opponent this Friday night on August 24 at the Minneapolis Armory in Minneapolis, Minnesota. However, Monroe Jr. now is currently scheduled to face journeyman Javier Francisco Maciel (33-6, 23 KOs) in a 10 round fight.

”I just got the Call to fight @WILLIEMONROEJR this Friday,” Martirosyan said.

Depending on what Martirosyan has left after being demolished by Golovkin, he might have a lot of problems trying to beat the 31-year-old Monroe Jr. Martirosyan still has excellent punching power, but his inactivity in the last two years might hurt him in a fight like that. Martirosyan’s lack win was three years ago against Ishe Smith in September 2015. Martirosyan beat he then 37-year-old Smith by a narrow 10 round majority decision.

Khan wants Pacquiao to fight him in UK »