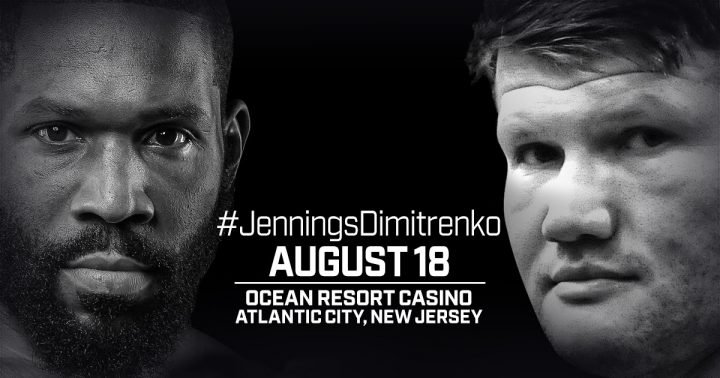 By Jeff Aranow: Heavyweight Bryant Jennings weighed in at a lean 225 pounds for his 12 round fight against Alexander Dimitrenko on Saturday night at the Ocean Resort Casino in Atlantic City, New Jersey. The fight will be televised by Top Rank Boxing on ESPN. The 33-year-old Dimitrenko weighed in at 257 pounds.

Jennings, 33, is attempting to put himself in position to fight for another world title fight after he failed four years ago in losing for Wladimir Klitschko in 2014. The 6’3” Jennings lacked the size and punching power to get to the 6’6” Klitschko to hurt him with his shots. Wladimir basically controlled Jennings with his jab alone. He rarely used his right hand and left hook, because when he did throw them, he would miss badly.

Jennings couldn’t get past Wladimir’s still accurate jab in the fight, and that’s what ultimately cost him the fight. Wladimir looked bad in the fight, showing signs that he had lost a lot of his punch accuracy and his ability to let his hands go. In Wladimir’s next fight after beating Jennings, he was dethroned by Tyson Fury in November 2015.

In Jennings’ next fight after that, he was beaten by Luis ‘King Kong’ Ortiz by a 7th round knockout in December 2015. Jennings took two years off from boxing after the defeat at the hands of Ortiz. However, Top Rank promoter Bob Arum was able to bring Jennings back in 2017 after signing him to his stable. Arum wants to rebuild the well-known 33-year-old Jennings to get him a title shot.

The target for Jennings and Top Rank is WBO heavyweight champion Anthony Joshua. Jennings will likely have the same type of problems as he did when he fought Wladimir years ago, but that’s not what this is about. The payday Jennings will get in challenging Joshua is likely the main thing, as he’ll get a lot of money fighting the British fighter no matter how badly he loses the fight.

”I definitely believe that the only thing that could get in the way is politics, but I’m with the most consistent promoter (Top Rank) in boxing history, so I would think I’m on the good side right now to not get stopped by obstacles that the politics would set me back on,” Jennings said to ESPN.com. ”So I think that I’m in a good spot and in a good place with good people, and I just think that my chances to at least fight for another heavyweight championship is definitely in the near future.”

Jennings’ chances of getting a title shot against WBC heavyweight champion Deontay Wilder are not so good. Wilder is with Al Haymon, and he’s unlikely to look in Jennings’ direction when selecting a challenger to defend against in a voluntary defense. Joshua is Jennings’ best chance for a world title shot, but that’s not going to happen soon though. After he gets Alexander Povetkin out of the way on September 22, Joshua has other options in front of him in Dillian Whyte and Jarrell Miller.

Jennings cannot afford to look past the 6’7” Dimtrenko, because he’s got a lot of size and experience going for him. When Dimitrenko is firing on all cylinders, he’s a tough obstacle for the B and C-level heavyweights. Jennings is more of a lower B-level fighter, who lacks the size and punching power to get past the solid B heavyweights in the division.

Since being signed by Top Rank, Jennings has beaten Joey Dawejko, Akhror Muralimov, Don Haynesworth and Daniel Martz. Top Rank is clearly being careful with Jennings in matching him against weaker opposition to get him ranked quickly in an effortless way without risk.

Other weights on this Saturday’s Top Rank card on ESPN are as follows: