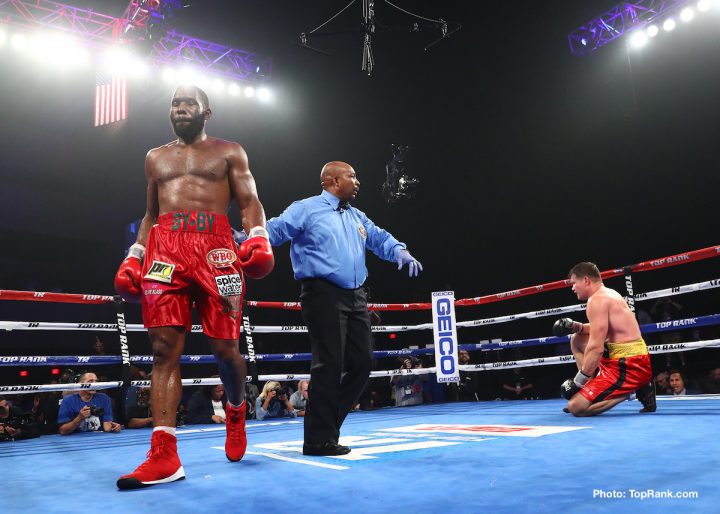 By Chris Williams: Bryant Jennings says he would have beaten Luis ‘King Kong’ Ortiz last Saturday night with the way that he was fighting against Ukrainian journeyman Alexander Dimitrenko in their heavyweight clash at the Ocean Resort Casino in Atlantic, New Jersey.

Jennings (24-2, 14) defeated Dimitrenko (41-4, 26 KOs) by a 9th round knockout to keep his career alive with another victory over a lower B-level heavyweight. It wasn’t the type of performance from the 33-year-old that sent shivers into the minds of the top heavyweights, least of all Jennings;’ former conqueror Luis ‘King Kong’ Ortiz, who stopped him in the 7th round three years in December 2015.

Jennings said he would have beaten Ortiz if he’d been inside the ring with him instead of the 6’7” Dimitrenko. What makes that hard to believe is the way that Jennings was dropped in the 4th round by Dimitrenko. Jennings would have likely finished off if it had been Luis Ortiz inside the ring instead of the journeyman Dimitrenko. Jennings survived by taking the fight to the inside and taking advantage of Dimitrenko’s inability to fight on the inside. Jennings tried the same thing against Ortiz, but he discovered the hard way that the talented Cuban had a powerful uppercut in his arsenal that he used against him to knock him out in the 7th round. In a rematch against Jennings, Ortiz would no doubt go back to the same uppercut that he used to knock him out in 2015.

”I think tonight I beat Ortiz,” Jennings said to RingTV.com. ”It was important that I finished the fourth like I didn’t get hit and had to stay on a knee for eight seconds. I got up and I was good. I knew this was going to be a tough fight; that’s a big dude.”

It’s up to Jennings’ promoters at Top Rank if they want to put him back inside the ring with the 39-year-old Ortiz so that he can show him that his knockout loss to him was just a fluke thing. I think it’s extremely doubtful that Top Rank will let Jennings anywhere near Ortiz, because he doesn’t look like he’s improved at all since his loss to the Cuban three years ago. If anything, Jennings has gotten worse because he would have never been knocked down by a limited fighter like Dimitrenko back in 2015. The fact that Jennings is getting dropped hard by a fighter in that class, it suggests that Top Rank is going to need to bring him back slowly because he’s not ready to fight a live body at this point. Top Rank has the money to lure the likes of Ortiz to face Jennings, but I don’t think they’ll consider making that fight for a second. It’s better for Top Rank to continue to feed Jennings stiffs until the World Boxing Organization makes him the mandatory challenger to WBO heavyweight champion Anthony Joshua in a year or two. The worst thing the WBO could do is order Jennings to face someone like Dillian Whyte or Jarrell ‘Big Baby’ Miller in a title eliminator.

If Jennings wants to try and avenge his loss to Luis Ortiz, he can always push his promoters at Top Rank to make that fight. I don’t think they will. They’re trying to salvage Jennings to put him in a big money title fight against Anthony Joshua. It doesn’t matter that Joshua will likely knock Jennings out in the 1st round. The money would be so good for Jennings and Top Rank that it won’t matter how badly he loses to Joshua. As such, it’s highly unlikely that Top Rank will ever put Jennings back inside the ring with Ortiz, because the outcome would be utterly predictable. It would be a repeat of the previous fight, but likely a faster ending with Ortiz knocking Jennings out within four rounds. If a limited fighter like Dimitrenko was able to drop Jennings, just imagine what Ortiz would do to him.

“I was rocked in the fourth round. I knelt there and thought, ‘This dude can’t hurt you, and he can’t do anything to you.’ That was about me keeping my composure at the worst point,” Jennings said.

Jennings picked up his fifth consecutive win since Top Rank signed him in 2017. Jennings wants a world title shot, but he’s got a ways to go unless Top Rank can work their magic and make a deal with Joshua’s promoter Eddie Hearn for a voluntary title shot.