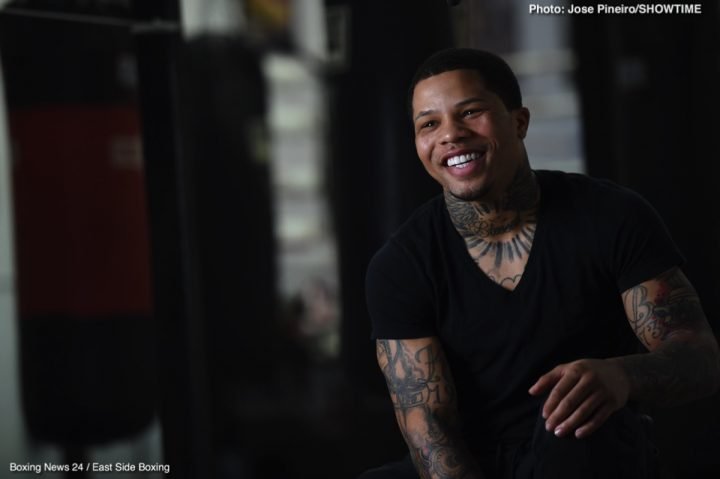 By Dan Ambrose: Floyd Mayweather Jr. posted a flyer on his Instagram account of WBA super featherweight champion Gervonta Davis defending against the recently beaten Abner Mares for his next fight. It would be a decent fight if the 32-year-old Mares (31-3-1, 15 KOs) was still in his prime and not coming off another loss to Leo Santa Cruz.

Mayweather matching Davis against faded fighters coming off of a loss like Mares is disappointment. Is he going to raid the just beaten ranks each time he matches Davis against someone? If this fight gets made, it will likely be a cash out fight for Mares. He’s at the end of the line at this point. He’s probably not going to beat any of the top super featherweights in the division.

Feeding Mares to Davis will give him a good final payday that he can enjoy as he goes off into retirement. Mares is more of a natural super bantamweight fighting a guy that should be campaigning as a lightweight in Davis. It would be a big size mismatch in favor of Davis.

Davis’ last fight was against Jesus Cuellar, who had been coming off of a 12 round decision loss to Mares. If Davis fights Mares, he’ll have fought two opponents in a row that were coming off of a defeat. Davis-Mares would have been a good fight six years ago when Mares was still unbeaten and looking good. Mares’ career has been on the slide since he was knocked out in the 1st round by Jhonny Gonzalez in 2013. Since that loss, Mares has posted a 5-2 record, which is not that good. He’s beaten weaker opposition, but fallen apart when he’s stepped it up against Santa Cruz. Mares isn’t that old in years at 32, but he’s been in a lot of hard fights, made a lot of money, and he’s had a lot of time off in between fights. More than anything, I don’t think Mares has the same ambition as he did earlier in his career when he was capturing world titles in three weight classes. If you put a less than motivated older fighter like Mares inside the ring with Davis, it’s likely going to end badly for him.

Mares is a popular fighter, which will help Mayweather increase the popularity of Davis with the casual boxing fans. Mayweather is being clever in matching Davis against an old timer that isn’t a real threat to beating him. If this was a younger Mares, it would be a fight that Davis would be at risk of losing. Mares is probably too old to pull off the upset against Davis unless he fights the perfect fight. Even then, Mares will likely come up empty.

Mares lacks the size and the power to give Davis a real test. Considering that Mares started his career at bantamweight in 2005, he’s going to be outsized by Davis if/when this fight takes place at super featherweight. Davis is going to come out of this fight looking good at the expensive of the faded Mares, but it’s not going to tell us anything about how good Davis is. For Davis to accomplish something, he’s going to need to face better opposition.

It’s unclear when Mayweather plans on making the Davis vs. Mares fight. It would be in Davis’ favor for the fight with Mares to take place soon, as he’s already been out of the ring since last April. Davis can’t afford to fight just once in 2018 if he wants to get the most out of his career. There’s no date or venue for the Davis vs. Mares fight as of yet.

While it’s a small upgrade for the 23-year-old Gervonta from his last fight against Jesus Cuellar, it’s not a huge fight due to Mares being past his prime and not the same fighter that he was years ago. Mayweather would be better off matching Davis against top fighters like Santa Cruz, Albeto Machado, Miguel Berchelt, Tevin Farmer, Vasyl Lomacheko, Christopher Diaz or Masayuki Ito.

Davis is supposed to be moving up to lightweight soon. Why he would want to fight Mares is anyone’s guess. He would be better off making the move to 135 to fight a top lightweight instead of facing a shot former three division world champion Mares. If Mayweather wants to match Davis against a super featherweight, then he should focus on putting him in with Santa Cruz, the fighter that just beat Mares.