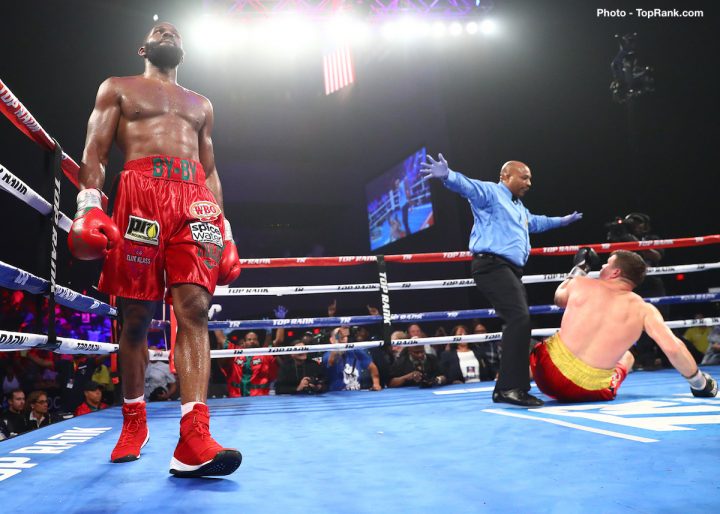 By Chris Williams: Shockingly, former heavyweight world title challenger Bryant ‘Bye-Bye’ Jennings (24-2, 14 KOs) had to get up off the deck to come back and stop 34-year-old journeyman Alexander Dimitrenko (41-4, 26 KOs) in the 9th round on Saturday night at the Ocean Resort Casino in Atlantic City, New Jersey. Jennings knocked Dimitrenko down in the 9th with a big uppercut.

The referee Allen Huggins then hastily stopped the fight. It looked like Dimitrenko was in good enough shape to continue fighting, but the referee halted it anyway. The official time of the stoppage was at 1:56 of round nine. Jennings would have likely stopped Dimitrenko sooner or later, but the referee’s decision to waive off the fight was still premature.

Dimitrenko looked very unhappy with the quick stoppage. He wanted to continue fighting but the referee never gave him a chance. Dimitrenko got up from the knockdown looking fresh and completely unhurt. The referee seemed to have made his mind up that he was going to stop the fight the moment that Dimitrenko went down. The referee was too quick on the trigger in stopping the contest. Jennings was going to win the fight, but the referee should have given Dimitrenko the benefit of the doubt by allowing him to continue fighting. Unfortunately for Dimitrenko, Jennings’ promoters at Top Rank are unlikely to give him a rematch. They want to get Jennings a lucrative title shot against WBO heavyweight champion Anthony Joshua.

Jennings was knocked down in round 4 by a hard right hand from the 6’7” Dimitrenko. However, Jennings did a good job of making adjustments by crowding Dimitrenko starting in round 5, and roughing him up in close.

Overall, it wasn’t a great performance by the 33-year-old Jennings. He struggled against Dimitrenko, who had been knocked out in three rounds by Joseph Parker in 2016 and stopped in the 11th round by Kubrat Pulev in 2012. Jennings should have been able to knockout Dimitrenko a lot easier than this.

The win for Jennings will likely move him up in the World Boxing Organization’s rankings where he’s currently rated number eight. In the best possible world, the WBO won’t require that Jennings fight a good contender for him to get ranked at number 1, which is where he’s probably going to need to be for him to get a shot against WBO heavyweight champion Anthony Joshua. The British fighter’s promoter Eddie Hearn likely won’t do the Top Rank promoted Jennings any favors by giving him a title shot as a voluntary challenger due to his fights being shown on ESPN and Joshua’s on DAZN. Joshua’s fights are shown on Sky Box Office PPV in the UK, but they’ll now likely be shown on DAZN in the States. Jennings doesn’t look like he’ll have any chance whatsoever in beating Joshua or WBC heavyweight champion Deontay Wilder. Jennings can forget about Wilder giving him a voluntary defense. That’s not happening.

Jennings did a far inferior job in beating Dimitrenko compared to Joseph Parker. Obviously styles make fights, but it didn’t look good seeing Jennings getting knocked down by Dimitrenko. Jennings is lucky that Dimitrenko had no inside game, because a good heavyweight would have given Jennings problems when he tried aking the fight to the inside. Luis Ortiz knocked Jennings out in the 7th round in 2015. Jennings picked the wrong guy to try and fight on the inside when he tried to battle ‘King Kong’ Ortiz in close. Ortiz wasn’t having none of it, as he took Jennings apart with ease on the inside. The thing is, Ortiz fought with the flu and was still able to destroy Jennings in seven rounds.

Dimitrenko showed good hand speed, power and punch variety when he was letting his hands go. If Dimitrenko had been able to throw more punches, he would have given Jennings a run for his money. Dimitrenko lacked the punch volume and more importantly the chin to win this fight.

It would be nice to see Top Rank take a chance with Jennings by looking to put him in with Joseph Parker and or Dillian Whyte. If Top Rank wants Jennings to get ranked highly in a hurry, then there’s no better way than for the sanctioning body to match him against Whyte or Parker. A rematch with Luis Ortiz would be a good option as well for Jennings. The lack of punching power of Jennings allowed the notoriously weak-chinned Dimitrenko to hang around until the 9th. If this had been a heavyweight with power, Jennings would have been in trouble.

In other boxing fans, #1 WBO super middleweight contender Jesse Hart (25-1, 21 KOs) defeated Mike Gavronski (24-3-1, 15 KOs) by a 3rd round knockout. Hart, 29, knocked Gavronski down twice in round 3. The referee Eric Dali stopped the fight after the 32-year-old Gavronski got back to his feet. The time of the stoppage was at 0:52 of the 3rd round. Hart had a lot of success with his uppercuts. The victory for the Top Rank promoted Hart was his third consecutive since losing to WBO super middleweight champion Gilberto ‘Zurdo’ Ramirez by a 12 round unanimous decision last September. Hart is looking to get another world title fight, and he’s rated number 1 with the WBO. It shouldn’t be that long before Top Rank matches their two fighters Ramirez and Hart back in with one another.

In other results on tonight’s ESPN card: