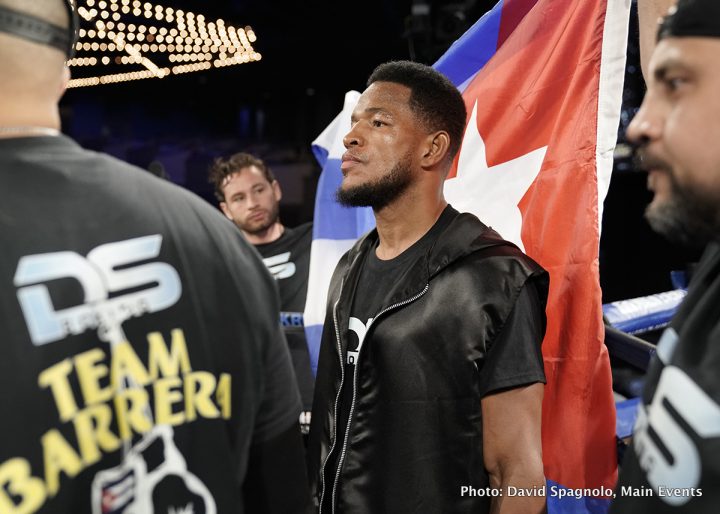 Barrera, 36, was knocked out in the 12th round in his last fight by World Boxing Association World light heavyweight champion Dmitry Bivol (13-0, 11 KOs) on HBO on March 3 at Madison Square Garden in New York. The talented former Cuban amateur standout Barrera put in a good effort against Bivol, but he was ultimately stopped in the 12th round. At the time of the knockout, Bivol was ahead by the scores 109-100, 109-100 and 109-100. Barrera had his moments in the later rounds after Bivol lost some steam on his punches, but he still wasn’t able to do enough to deal with his high work rate.

“I want to announce to all my supporters that on the 18th we are back, with more energy than ever and the renewed desire to seek a world title,” Barrera said to elnuevoherald.com. “Monaghan is a considerable opponent, with only one defeat. It will be a good test.”

The defeat that Barrera is talking about is the 36-year-old Monaghan’s recent 2nd round knockout loss to the unbeaten 2012 U.S Olympian Marcus Browne last year in July. Monaghan looked hopelessly over-matched against Browne. That was the first time in Monaghan’s eight-year pro career that he faced a quality opponent, and the results were terrible. Monaghan recently rebounded from the defeat in beating Evert Bravo by an eight round unanimous decision last November. Monaghan hasn’t fought yet in 2018.

This is a risky fight for Monaghan, because he’s still ranked high at 175. If he loses badly to Barrera, then it’s likely going to knock him out of the top 15 rankings. Monaghan isn’t young at 36, so it’ll be hard for him to bounce back from a loss to Barrera. The thing that Monaghan has going for him in this fight is the timing of the contest. It’s coming right after Barrera’s knockout loss to Bivol. Barrera took a great deal of punishment in that fight, and it’s unclear how he’ll perform in coming back from that defeat.

#4 IBF Barrera needs a win over Monaghan to get pushed back up in the rankings to No.1 with the International Boxing Federation at light heavyweight. It’s safe to say that Barrera won’t be given a rematch with Bivol unless he becomes his mandatory challenger. The only way for Barrera to do that is to defeat Monagahan and keep fighting frequently in order to get pushed up the rankings quickly. Barrera is 36, and cannot afford to take his time the way that many younger fighters do in the sport. If Barrera loses this fight to Monaghan, then he can forget about getting a title shot anytime soon. A loss to Monaghan would be a major setback for Barrera and a likely sign that his career is done. Barrera only has two defeats on his six-year resume in loses to Bivol and Andre Ward. Those are good fighters and there’s nothing for Barrera to be ashamed of in losing to him. However, if he gets beaten by Monaghan, it would be a clear sign that he’s not good enough to mix it up with the better fighter in the division.

It would be better for Barrera to target WBO light heavyweight champion Sergey ‘Krusher’ Kovalev rather than looking to fight Bivol a second time. The way that Barrera lost to Bivol, he doesn’t look like he’ll ever be able to beat the Russian fighter. It would be better for Barrera to seek out a title shot against the 35-year-old Kovalev, who has stamina issues and has problems handling body shots. The blueprint has

already been created in how to defeat Kovalev, so all Barrera needs to do is follow the plan to try and duplicate the efforts by Andre Ward.

24-year-old two-time Olympic Cuban gold medalist Robeisy Ramirez reportedly abandoned the Cuban national team during training this past week while in Aguascalientes, Mexico, according to ESPN. It’s believed by some boxing fans that Cuban amateur star plans on defecting in order to turn pro.

Ramirez captured gold medals in the 2012 and 2016 Olympics for Cuba at flyweight and bantamweight. In the 2016 Olympics in Rio de Janeiro, Brazil, Ramirez beat U.S Olympian Shakur Stevenson in the finals by a 2-1 score. It was a close fight, but it was a clear win for Ramirez. He looked like the better fighter of the two. In Ramirez’s other fights during the 2016 Summer Olympics, he defeated Shiva Thapa, Mohamed Hamout, Zhang Jiawei and Murodjon Akhmadaliev.

Ramirez has similar talent as two-time Ukrainian Olympic gold medalist Vasyl Lomachenko, and he likely will be able to contest for a world title within his first five fights in the same way he did. Ramirez is the type of talent where he can capture a world title right away rather than having to burn through six to eight years of his career before he finally gets a title shot the way that many fighters do. Ramirez won’t be in his 30s by the time he gets a crack at a world title.

Earlier this year, Cuban Olympic bronze medalist Joahnys Argilagos defected while at a tournament in Mexico.

In the past, other Cuban Olympians have defected. Here’s a list of some of the great Cuban amateurs that have defected:

Most of those fighters have done well in the pro ranks. It’ll be interesting to see how well Robeisy Ramirez does in comparison to those fighters. He has an advantage over a lot of them in the fact that he’s young at 24, and he’s incredibly dominant. Some of the Cuban amateur stars from the above list have failed to get the most out of their careers due to weight problems and inactivity. Gamboa is a perfect example of a fighter that was blessed with amazing talent, but who failed to get the most of his career due to his inactivity.

If Robeisy Ramirez were to sign with Top Rank Boxing, fights between him and Shakur Stevenson and Michael Conlan would be a strong possibility in the future, although not likely soon. Those guys are being brought along slowly by Top Rank. Ramirez would likely be pushed at a much faster pace than Conlan and Stevenson because he’s arguably a better talent than those two guys. At the pro leveo, Conlan looks sloppy with the way he fights with his hands down by his sides. He doesn’t look like a future world champion at all. In the case of Shakur Stevenson, his lack of punching power and hand speed will surely limit his potential. Stevenson, who fights in the featherweight division, doesn’t hit hard enough for him to be taken seriously as a threat to any of the champions in the weight class. Even against the poor opposition that Top Rank has been feeding Stevenson, he’s not been able to knock them out with any degree of regularity. Ramirez will be a different case. He has hand speed and punching power going for him. If Top Rank can get their hands on Ramirez, they could get him a world title shot right off the bat and turn him into a better version of Lomachenko. What makes Ramirez a more exciting fighter than Lomachenko is the fact that he has a more exciting fighting style, and he arguably has more charisma and star appeal. Ramirez has a Hollywood presence about him that will make him a superstar in a short period of time at the pro level.