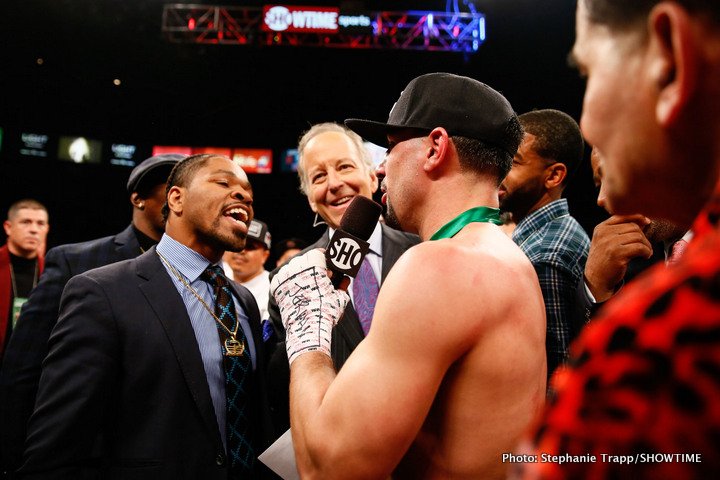 By Dan Ambrose: Danny Garcia and Shawn Porter will be fighting on September 8 for the vacant WBC welterweight title rather than the previously talked about date of August 25, according to Boxingtalk.com. The September 8 date has still not been officially announced.

The two former world champions will be going after the WBC 147lb title that was recently vacated by inactive fighter Keith ‘One Time’ Thurman.

Porter (28-2-1, 17 KOs) is ready to go after another world title after losing to World Boxing Association welterweight champion Thurman by a 12 round unanimous decision on his previous attempt in June 2016. Porter, 30, has a two-fight winning streak since then in beating Adrian Granados and Andre Berto. Porter is currently ranked at No.2 by the WBC, and waiting patiently for his fight with Garcia. Before the injured Thurman vacated his WBC title, Porter had heated words with him, questioning him about when he would return to the ring to finally defend the WBC title.

Thurman had spoken of wanting to use 2018 as a “get back” year to take a tune-up before defending his titles in 2019. That didn’t go over well with Porter, who wanted his title shot this year rather than having to wait until 2019. Now that Thurman has vacated the WBC title, Porter is now ready to fight the 30-year-old Garcia.

Garcia lost to Thurman last year by a 12 round split decision in competitive fight. Garcia called for a rematch after the fight, but Thurman suffered an elbow injury and he’s been unable to grant him his request. In Garcia’s last fight, he defeated the capable former world lightweight champion Brandon ‘Bam Bam’ Rios by a 9th round knockout on February 17 in Las Vegas, Nevada. Despite Rios being over-the-hill, he inflicted a lot of punishment on Garcia before being knocked out in the 9th. Garcia’s face was badly marked up in the contest. There’s still a lot of question marks about whether Garcia is cut out for the welterweight division, because he’s not looked particularly sharp since moving up to the division in 2014. In Garcia’s seven fights since moving up to 147, he’s fought these fighters:

Thurman is a good fighter, but Garcia lost to him. The fight looked like it was going to be a one-sided win for Thurman until he backed off in the second half after getting hit hard by a couple of hard left hooks from Garcia. Thurman still did enough to get the victory, but it was definitely a close affair. Garcia looked vulnerable at 147 in a way that he never did fighting at 140. It’s likely that Garcia will struggle against Porter and probably lose the fight. If Porter doesn’t gas out, he should get the ‘W’ against Garcia. What

we don’t know is whether Garcia will have some tricks up his sleeve to beat Porter. In Garcia’s fight against Lucas Matthysse in 2013, he used low blows and pushing off to get the victory. The referee Tony Weeks waited until the 12th round to finally deduct a point from Garcia for his low blows. Had Weeks taken a point earlier in the fight, it’s possible that Matthysse would have won, as the low blows from Garcia seemed to cripple his game.

There are some interesting fights on the horizon for the winner of the Porter vs. Garcia contest. IBF welterweight champion Errol ‘The Truth’ Spence Jr. is a likely bout that has a good chance of taking place in 2019. Spence has talked about facing the Garcia-Porter winner, saying that his management has told him recently that he’ll be facing the winner of the fight. We’ll see if that’s the case.
Unfortunately for Porter and Garcia, there aren’t a lot of options besides Spence, Amir Khan, Thurman and WBO champion Terence Crawford. It’s unclear how realistic is for the boxing world to expect the Garcia-Porter winner to eventually face Crawford, as he’s promoted by Top Rank and they don’t frequently work with Garcia and Porter’s management.

It would be disappointing if the winner of the Porter vs. Garcia fight winds up milking the WBC title against weak opposition in order to hold onto the title for as long as possible. Garcia didn’t do much after his win over Lucas Matthysse in 2013. The fans saw Garcia take five consecutive fights against these guys: Rod Salka, Mauricio Herrera, Lamont Peterson, Paulie Malignaggi and Robert Garcia. Those were not the fighters the boxing fans wanted to see Garcia fight. They were interested in watching him test himself against Adrien ‘The Problem’ Broner, Viktor Postol, and Terence Crawford. Some fans even wanted to see Garcia face Matthysse in a rematch with a more engaged referee that would control his low blows. Garcia feels that the guys he fought during this three-year stretch were top level fighters. He may be right technically, but they weren’t the elite level guys that the fans wanted to see Garcia mix it up with.

The boxing public can’t wait for Porter and Garcia to finally face each other, as they’ve been looking forward to this fight since earlier this year. It’s great news for the fans that the fight is now only two months away because they need to face each other already.

On the undercard, former IBF heavyweight champion Charles Martin (25-1-1, 23 KOs) is expected to face unbeaten contender #8 WBC Adam Kownacki (17-0, 14 KOs), according to Boxing Talk. The 32-year-old Martin has won his last two fights against Byron Polley and Michael Marrone since being stopped in the second round by Anthony Joshua two years ago in April 2016. The 6’5” southpaw Martin hasn’t exactly been the busiest of heavyweight contenders since his defeat to Joshua. You have to wonder how much motivation Martin has for his career right now. In his last fight against the journeyman Marrone, he weighed in at a career high of 255 pounds. Martin’s inactivity, weight and the low level of opposition seems to suggest that he’s not taking his career as serious as he needs to for him to be successful. If Martin doesn’t want it anymore, he’s going to have big problems when he gets inside the ring with the heavy-handed 29-year-old Kownacki, because this guy can punch. Easily the best win of Martin’s six-year pro career came against Vyacheslaev Glazkov in January 2016. Martin stopped Glazkov in the 3rd round after the Ukrainian suffered a knee injury. Glazkov hasn’t fought since.

The Poland born Kownacki has knocked out his last four opponents, including former world title challenger Arthur Szpilka. Kownacki did a better job of stopping Szpilka in the 4th round in 2017 than current World Boxing Council heavyweight champion Deontay ‘Bronze Bomber’ Wilder did in knocking him out in the 9th round in January 2016. In Kownacki’s last fight, he stopped Lago Kiladze in the 6th round last January in Brooklyn, New York. The way that Kownacki is looking now, it’s going to be tough for Martin to try and defeat him on September 8. Kownacki is active, young, huge and powerful. Those ingredients spell disaster for Martin unless he can get back to the level he once was. Martin didn’t look good in getting knocked out in two rounds by Joshua in 2016. Kownacki has similar punching power as Joshua. He just doesn’t possess the same hand speed and size.