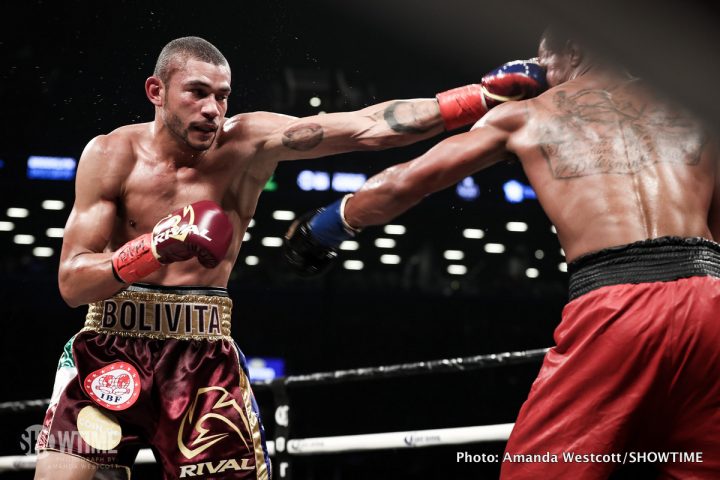 By Jim Dower: On the same day that James DeGale vacated his IBF super middleweight title, Jose Uzcategui (27-2, 23 KOs) has been promoted by the International Boxing Federation to their news IBF 168 lb. champion, according to Michael Benson.

After DeGale chose to vacate the IBF title without defending it against his recently IBF ordered mandatory challenger Uzcategui, 27, the sanctioning body seemingly went ahead and made the Venezuelan fighter the full IBF 168 lb. champion without requiring that he fight for the vacant title against the next highest ranked available contender. In this case, Uzcategui likely would have had to battle #2 IBF Caleb Plant for the belt.

Uzcategui is coming off of an 8th round knockout win over Andre ‘The Matrix’ Dirrell last March in Brooklyn, New York. Uzcategui dominated the fight on two of the scorecards at the time of the stoppage. It was a surprise to see Dirrell quit without a real reason. He was still competitive in the fight when he just suddenly stopped fighting after having problems in the 8th. Uzcategui had lost his previous fight to Dirrell by an 8th round disqualification last year in May after he hit the Flint, Michigan native after the bell sounded to end the 8th. The referee Bill Clancy then disqualified Uzcategui for the late hits after Dirrell stayed down rather than getting back up. The IBF ordered a rematch, and that didn’t go well for Dirrell unfortunately.

Now that Uzcategui is the IBF champion, he’s a possible option to face the other super middleweight champions George Groves, David Benavidez and Tyron Zeuge. It’s unlikely that Uzcategui is going to get a shot at Groves or Zeuge anytime soon. Those guys are heading in another direction. WBC champion Benavidez is the most likely belt holder that will be willing to take a fight against Uzcategui. But that an easy fight for Uzcategui, because Benavidez can really punch. Uzcategui fell apart mentally when he faced an opponent with good punching power in Matt Korobov in 2014 in losing a one-sided 10 round unanimous decision. Even in Uzcategui’s fight against Dirrell, he looked mentally weak when he was taking shots from ‘The Matrix.’ If not for Dirrell giving up on himself, we might have seen a close fight at the end.