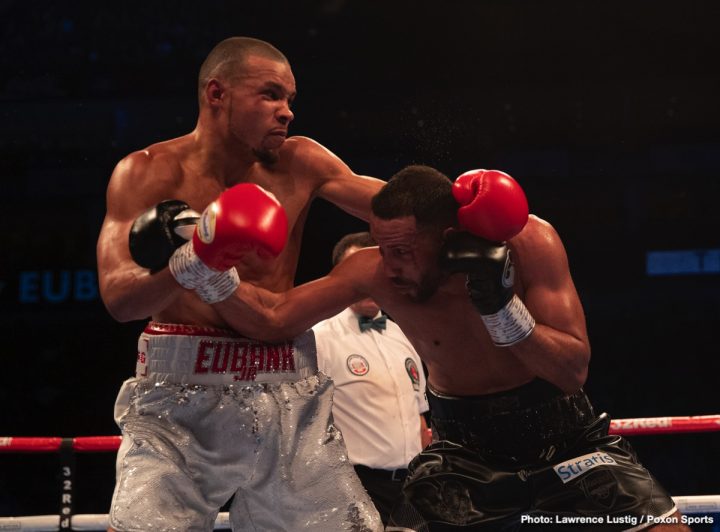 Saunders (27-0, 13 KOs) said he would like to box him. Saunders could use the fight with Eubank Jr. to get him a big win over a name a fighter after he recently vacated his World Boxing Organization middleweight title after testing positive for oxilofrine last year while preparing for a title defense against WBO mandatory Demetrius Andrade. Saunders, 29, is now moving up to super middleweight to face #1 WBO Shefat Isufi (27-3-2, 20 KOs) on April 13 at the Wembley Arena in London. Those two were supposed to be fighting for the vacant WBO super middleweight title, but the previous champion Gilberto ‘Zurdo’ Ramirez changed his mind about vacating it, and decided to keep the belt. As such, Saunders vs. Isufi will be for the #1 ranking with the World Boxing Organization at 168.

Eubank Jr. says Saunders doesn’t deserve a fight with him after his failed drug test. Eubank Jr., 29, says he prefers to go after one of the world champions at middleweight or super middleweight rather than facing a non-champion in Saunders.

NEWS:   Eubank Jr: "Benn doesn't know what it's like to fight at this level"

“I’m sick of talking about him,” Eubank Jr. said to IFL TV about Saunders. “If the rematch happens, it happens. If it doesn’t, it doesn’t. There’s so many opportunities out there for me. He got caught with drugs. He doesn’t really deserve a fight with me at all at this stage in his career, but we’ll see. At the moment, the belts are what I want. He doesn’t have a belt, so he’s not directly on my radar, but it can happen at some point,” Eubank Jr. said.

It sounds like Eubank Jr. isn’t too concerned with the need of avenging his earlier loss to Saunders from 2014. Eubank Jr. lost the fight by a 12 round split decision in part, because he spent so much time posing after throwing punches in the first half of the fight. Saunders took advantage of Eubank Jr’s stop and go style of fighting back then, and wound up building up a lead and outworking him to win a close decision. However, even though Eubank Jr’s improved, it’s not guarantee of success against Saunders. That would still be a very hard fight for Eubank Jr., and he could lose.


« Chris Eubank Jr.: “Now I’m coming for all the other belts in the Super-Middle division!”