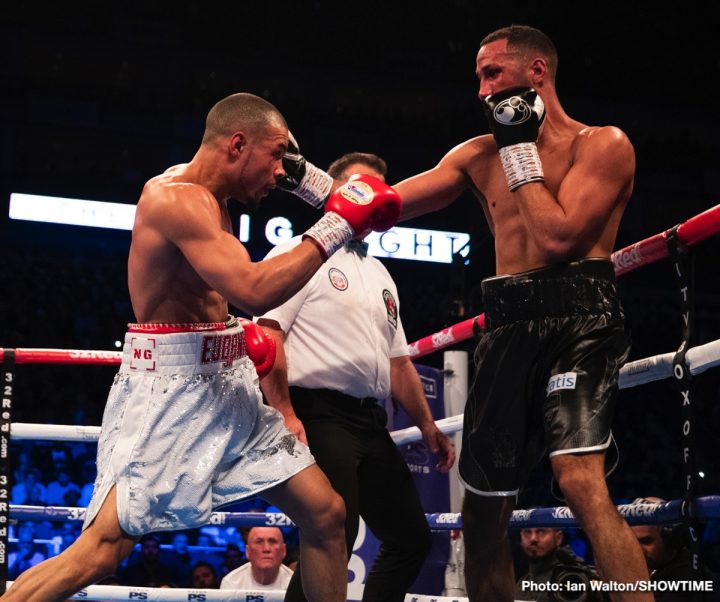 By Tim Royner: After 10 years as a pro, James DeGale has officially retired from boxing following his recent loss to Chris Eubank Jr. in London, England. This was an expected move for the 33-year-old DeGale (25-3-1, 15 KOs), as he was soundly beaten by a fighter that many believe that he would have had a fairly easy time beating in his prime.

If the 2008 Olympic gold medalist DeGale had known that he wasn’t going to be able regain the form that he once had, he likely would have retired after his 12 round draw against Badou Jack in January 2017.

DeGale had been showing signs of being done as a fighter since his first fight against bottom fringe contender Caleb Truax in December 2017. That match was originally planned a voluntary defense/tune-up fight for DeGale after having had shoulder surgery on his right shoulder. The injury had dated back from his fight with Jack two years ago.

Some boxing fans believe the fight took a lot out of ‘Chunky’ DeGale, but it likely more of a case of the shoulder injury being the root of his decline as a fighter. The power, speed and the snap on DeGale’s right hand punches weren’t the same after that fight, and that led to him struggling against Traux in two fights, and then losing to Eubank Jr., which had to have been a hard pill to swallow.

Here’s what DeGale said in making his retirement announcement on Thursday:

“Today marks ten years since my professional debut fight on 28th February 2009 and today is the day I am announcing my retirement from boxing…It hard to admit that I’m not the fighter I once was, but I’m human and along the way, my injuries have taken a toll – both on mind and body and these things have contributed to impact my performance in the ring.”

In looking at DeGale’s performance against Eubank Jr., he didn’t look bad at all in that fight. What was missing was his power in his right hand. DeGale couldn’t make Eubank Jr. pay for all the mistakes that he was making in their the way that George Groves did in beating him last year. DeGale showed a lot of the amazing boxing skills that he’d always possessed during his pro and amateur career. What was missing was the power in his right hand, which has always been DeGale’s main weapon.

We’ll have to see if DeGale, 33, chooses to stay retired or not. With the money that he could make for a rematch with George Groves and/or fights with Callum Smith and other popular fighters, you never can say never. There’s always a chance that DeGale could be lured back into the ring, especially if his right shoulder regains the strength that it once had.

“I lost the fight on Saturday at The O2 but I’m touched to have a good send off from the fans in my home city,” DeGale said.

DeGale had a superb career as a fighter. He made good money, and he has a lot to be proud of. What achieved a lot of fighters can only dream of doing. In looking at DeGale’s career, the real disappointment was he couldn’t get Carl Froch to fight him when he wanted that fight with him, and he was unable to get a rematch with Groves after losing to him by a close 12 round majority decision early in 2011. DeGale always wanted the second fight with Groves, but there was no interest on George’s part. Originally, they were going to wait until both were champions before they fought each other again, but it took Groves a long time before he finally won a world title in 2017. DeGale had been a world champion since 2015, and was considered the best fighter for a two year period. Groves’ had taken a hit with his two knockout losses to Froch. When Groves finally did become a world champion in 2017, DeGale suffered a shoulder injury in his hard fight with Jack, and when he did finally come back the injury, he lost his first fight against Truax. It was all downhill from there for DeGale.

DeGale stuck it out after his loss to Truax, and was able to beat him in their rematch last April. But one could see from that fight, DeGale hadn’t made much improvements in his game. He beat Truax by using movement and holding. That wasn’t the old DeGale that boxing fans had known and loved. The version that we saw in his second fight with Truax and against Eubank Jr. was a spoiling version of DeGale, who was seemingly incapable of standing and getting the better of his arguably lesser opponents. Groves commented after DeGale’s loss to Eubank Jr. that he needed to walk away from the sport. He noted that DeGale’s style of fighting in which he could go from rope to rope to slug it out with his opponents wasn’t going to work long term for him. It’s a punishing style of fighting, and we saw the after effects of that with DeGale’s career coming to an end prematurely after 10 years. In a perfect world, DeGale will rehab his right shoulder, and regain the strength that he once had in that arm so that he can resume his boxing career. But that’s not likely to happen at this point. It’s been two years since DeGale’s fight with Jack in 2017, and it seems pretty clear that this is as good as it gets in terms of what’s left of DeGale’s physical skills. It’s too bad that he could retool his game, but it doesn’t look like it would be possible.

The best wins of DeGale’s 10 year pro career came against Andre Dirrell, Lucian Bute, Paul Smith, Truax and Rogelio Medina. 2015 was easily the best year of DeGale’s career with him defeating Dirrell by a 12 round unanimous decision to win the vacant International Boxing Federation super middleweight title, and then beating former 168 lb champion Lucian Bute in his first defense. The way that DeGale looked in those two fights, he would have beaten anyone in the super middleweight division at that time. Unfortunately for DeGale, he wasn’t able to sustain that level for long, as he fought Jack two years later in 2017 was never the same fighter afterwards. Some boxing fans believe that DeGale deserved a win or a draw in his fight with Groves. It was a close enough fight for it to be considered a draw. It was a close enough fight for it to have been a draw, but the crowd was on Groves’ side in that fight. DeGale had very little cheering from the pro-Groves crowd on the night. That might have had an effect on the scoring by the judges.

“here’s nothing left to prove,” DeGale said. “A majority of the greats go out on loss and for me, it’s time to hang up the gloves and to move on with my head held high.”

« James DeGale Statement: Ten and Out!

Hearn offering Wilder $15M to fight Breazeale, Whyte or Kownacki next, then Joshua »