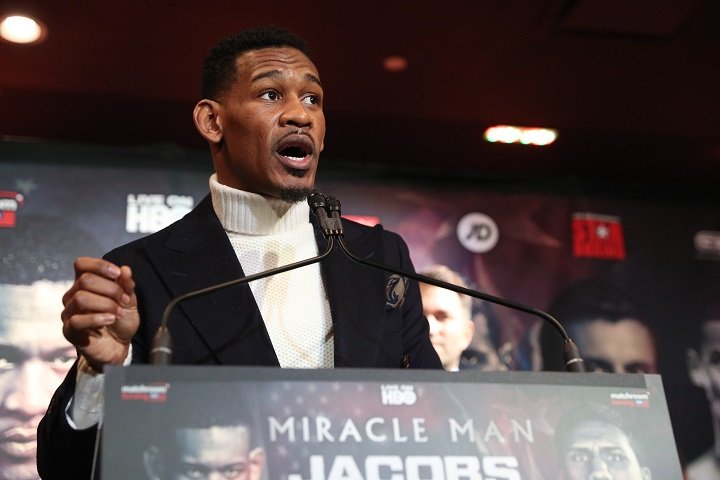 By Jim Dower: The IBF ordered a purse bid for July 5 for the Daniel Jacobs vs. Sergey Derevyanchenko fight. The two fighters will be scrapping it out for the vacant International Boxing Federation middleweight title that was recently stripped from Gennady Golovkin for failing to commit to a title defense against IBF mandatory Derevyanchenko (12-0, 10 KOs) by the IBF mandated August 3 date.

GGG chose instead to negotiate a lucrative rematch with Saul Canelo Alvarez on September 15 rather than face the little known 32-year-old Derevyanchenko and receive a smaller payday and little credit if he beat him.

DiBella is in a tough position right now. He pushed for his fighter Derevyanchenko to be given a title shot on three weeks’ notice against Golovkin after Saul Canelo Alvarez pulled out of his May 5 fight against GGG. Team Golovkin didn’t want to fight Derevyanchenko on three weeks’ notice, so they asked the IBF for an exception to allow them to fight junior middleweight Vanes Martirosyan. The IBF granted Golovkin’s management their wish, but they then mandated that he defend against Derevyanchenko by August 3. This was seen as a major victory by DiBella and Derevyanchenko at the time. But little did they know that the IBF would turn around and order Derevyanchenko to face Jacobs for the vacant IBF title they stripped from Golovkin. I think DiBella was expecting the IBF to order Derevyanchenko to face a soft tough for the vacant IBF middleweight title, but instead they ordered him to face Jacobs. That’s not a soft touch for Derevyanchenko. He could lose that fight and end up with nothing after all the clever moves done by DiBella.

Earlier this month on Jun11, the IBF ordered former WBA middleweight champion Jacobs (34-2, 29 KOs) and Derevyanchenko to begin negotiations for a fight for the vacant IBF 160lb title. However, Lou DiBella, the promoter for Derevyanchenko, let the IBF know on Monday that he wanted an immediate purse bid, according to Dan Rafael of ESPN. DiBella had tried in vain to try and negotiate the Derevyanchenko-Jacobs fight with Jacob’s promoter Eddie Hearn of Matchroom Boxing, but with no luck. So instead of sticking it out and getting nowhere, DiBella chose to let the IBF know that he wanted a purse bid to take place. The promoters can still make a deal before July 5 if the motivation is still there. Hearn is used to getting things his own way in negotiations, so I’m not surprised that the negotiations went nowhere. Derevyanchenko and DiBella should have known better.

Jacobs and Derevyanchenko will both get 50 percent of the bid. This is a fight that will interest a lot of boxing fans, as well as HBO, who has Jacobs under contract for a multi-fight deal. If Jacobs doesn’t fight at a higher level than he did in his last fight against Maciej Sulecki last April, then he has no chance. Jacobs barely won the fight. The 12th round knockdown Jacobs scored was the deciding factor in the fight. It was the second consecutive poor performance from Jacobs, who is starting to look like a shot ighter since his loss to Gennady Golovkin last year in March. I don’t know if Jacobs is a shot fighter, but he’s starting to look like he is since his loss to GGG. Right now,

The 2008 Olympian Derevyanchenko isn’t a huge draw with the boxing fans, so him getting a 50-50 deal is a real plus for DiBella. In Derevyanchenko’s last fight, he defeated Dashon Johnson (22-23-3) by a 6

th round stoppage. Just what Derevyanchenko was doing fighting a guy with a record like that is anyone’s guess. He should be fighting better opposition than that at this point in his career. Derevyanchenko is about to turn 333 and he shouldn’t be fighting guys with as many losses as they have wins like Dashon Johnson.

Derevyanchenko will still likely beat Jacobs despite never having fought anyone near as talented during his career. Derevyanchenko’s best win of his four-year pro career came against Tureano Johnson last year in August in stopping him in the 12th round. That was a hard fight for Derevyanchenko, who had to box when things got tough for him in the second half of the contest. Jacobs, 31, hasn’t been looking good in his last two fights and it’s starting to appear to some that he’s lost something from the tough fight that he had against GGG in 2017. Jacobs’ punching power looks to be the same. It’ his timing and his timid fighting style that made him struggle in his last two fights. Jacobs needs to be aggressive like he was against Sergio Mora. That’s when Jacobs is at his best. If Jacobs can fight like that against Derevyanchenko, he’ll have a good chance of winning the fight. But if he runs from him and tries to spoilt, then it’s going to be difficult for him to get the ‘W’ on the night.

The best possible situation will see the winner of the Jacobs vs. Derevyanchenko fight face the winner of the Saul Canelo Alvarez vs. Golovkin contest. That’s what Hearn is counting on. However, I don’t know if that’s what GGG’s management wants. They would be going backwards to go after the IBF strap, and after everthing that took place with the sanctioning body giving GGG the August 3 mandate to face Derevyanchenko, I tend to doubt that he’ll want anything to do with the IBF title now. That’s bad for the IBF potentially, especially if Canelo shows no interest as well in going after the winner of the Jacobs vs. Derevyanchnko fight. The IBF will end up with a weaker, less popular champion once the smoke clears from the Jacobs-Derevyanchenko fight. It could be a really bad deal for the IBF.