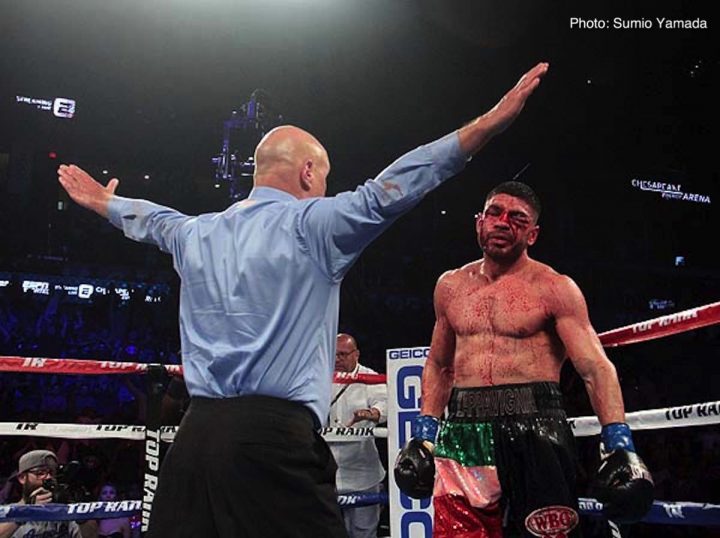 By Chris Williams: Undefeated light welterweight contender Alex Saucedo (28-0, 18 KOs) stopped Lenny Zappavigna (37-4, 27 KOs in the 7th round on Saturday night in a tougher than expected fight on ESPN at the Chesapeake Energy Arena in Oklahoma City, Oklahoma.

This was a fun fight to watch. There wasn’t much talent between the two, but there was plenty of heart. Zappavigna’s trainer halted the fight in the 7th round due to his fighter being cut up and his left eye closed. The official time of the stoppage was at 2:31 of round 7.

Saucedo was also cut, but not nearly as bad. Saucedo knocked Zappavigna down in round 3. In round 4, Zappavigna came back and hurt Saucedo and dominated the action. Saucedo came back in the 5th and controlled the fight for the remainder of the wild fight.

This was easily the toughest fight of the 24-year-old Saucedo’s seven-year pro career. Saucedo almost was knocked out in the 4th round when the 30-year-old Australian Zappavigna caught him with a big sot and then spent the last two minutes hammering him with heavy shots.

The referee could have stepped in and stopped it and there wouldn’t have been any complaints from the boxing fans at ringside. Saucedo was able to make it out of the round and go on to win the fight, but his performance showed that he’s not anywhere near the talent level as the other top fighters like Regis Prograis. Saucedo would have been knocked out by Prograis early on if he’d been inside the ring with him tonight.

The victory for Saucedo makes him the mandatory challenger to WBO light welterweight champion Maurice Hooker. It’s debatable whether Saucedo wins that fight. Hooker is easily the weakest of the current champions at 140, but he’s still a good fighter and won’t be an easy fight for Saucedo. If Saucedo beats him, Top Rank will have two of champions at light welterweight with their stable.

The Top Rank promoted Jose Carlos Ramirez holds the WBO 140 lb. title. Prograis would be a lot of trouble for Ramirez and Saucedo. Of course, Top Rank likely won’t be in a hurry to make those fights with Prograis. He’s too good and Saucedo and Ramirez are too flawed. Saucedo is also ranked #2 with the World Boxing Association. I doubt that Top Rank will have Saucedo target WBA champion Kiryl Relikh because he hits hard, and he’s a more dangerous guy than Zappavigna. Saucedo was almost knocked out by Zappavigna. Just imagine what Relikh would do to Saucedo if he got him in trouble.

In other boxing results on the card, heavyweight Trey Lippe Morrison (15-0, 15 KOs) defeated Byron Polley (30-23-1, 13 KOs) by a third round knockout. The fight was halted at 1:39 of round 3. The 28-year-old Morrison is the son of former heavyweight world champion Tommy ‘The Duke’ Morrison. It’s unclear how long Top Rank is going to wait before they put Morrison in with a live body. Although Morrison showed good punching power tonight, he’s short at 6’2”, and very easy to hit. I doubt that he’s going to do well when he’s eventually stepped up against better opposition.

Former WBO light welterweight champion Mike ‘Mile High’ Alvarado (39-4, 27 KOs) defeated journeyman Martin Angel Martinez (17-15-1, 10 KOs) by a 9th round knockout. The badly Martinez opted not to answer the bell for the 10th. Alvarado looked absolutely shot to pieces. His hand speed is gone, and his reflexes are totally missing. Alvarado absolutely needs to retire at this point in his