Manny Pacquiao vs. Mike Alvarado in doubt for April 14th 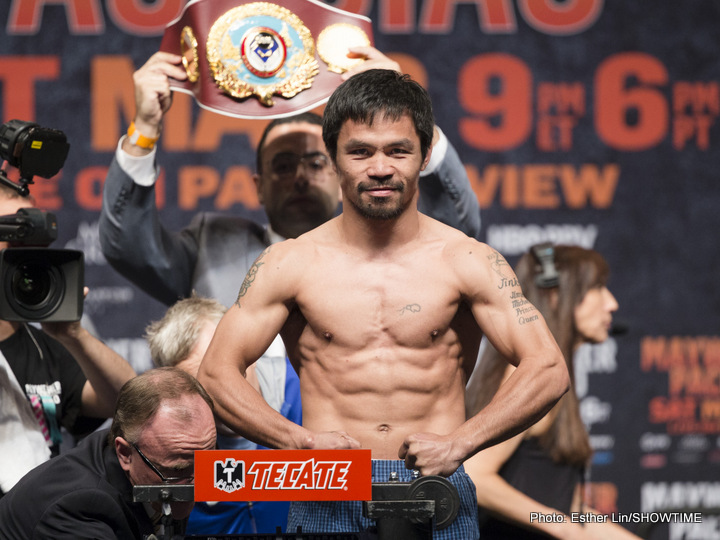 By Chris Williams: Manny Pacquiao might not be fighting Mike Alvarado on April 14th as previously believed. The fight is in doubt, according to Lance Pugmire of the LA Times. Pacquiao and Alvarado’s promoter Bob Arum of Top Rank is expected to make a statement on that in the next week.

WBO welterweight champion Jeff Horn will still be defending his title against mandatory challenger Terence ‘Bud’ Crawford on April 14 on ESPN at the Mandalay Bay Resort & Casino in Las Vegas, Nevada. If Pacquiao is off the card, then it’s going to be tough for Arum to sell the Horn vs. Crawford fight to the public on ESPN PPV. Horn-Crawford is not PPV worthy. Even if Pacquiao was fighting Alvarado in the co-feature, it’s still not a PPV worthy card.

It’s unclear what why Pacquiao vs. Alvarado is in doubt. It’s possible that Pacquiao, 39, has listened to the criticism from the boxing public over the news of him fighting the shot 37-year-old Alvarado, and realized that it would be a career move. Moreover, the talk of Pacquiao being assigned to the undercard of the Jeff Horn vs. Terence Crawford fight has angered a lot of boxing fans, as they don’t like the idea of the Filipino star being demoted to an undercard fighter. Crawford and Horn are NOT stars in the boxing world, and it would look really bad if Pacquiao fought on their undercard.

“We’re going to have an announcement in the next couple days. I can’t talk about it,” Arum said to the latimes.com about Pacquiao’s status for the Horn vs. Crawford fight.

When Pacquiao does fight again, he might not be with his longtime trainer Freddie Roach. The trainer says he’s not heard from Pacquiao since his loss to Jeff Horn on July 2 in Brisbane, Australia. Roach says he tried calling Pacquiao 5 times, but he’s not picked up the phone or called him back. As such, Roach doesn’t know if Pacquiao will be using him for his next fight.

Pacquiao’s assistant trainer Buboy Fernandez has been rumored as a possible replacement for Roach. Pacquiao was badly roughed up by Horn last July, and Roach didn’t take an active role in getting on the referee’s case to get him to take control over the fight to stop the roughhouse tactics. Pacquiao was head-butted, shoved around and put in head-locks frequently during the fight.

“I usually leave him alone until I hear from him, but I’ve called him five times and haven’t heard back,” Roach said to the latimes.com. “Maybe he changed his number.”

If Pacquiao is changing trainers, it probably won’t make a difference. Pacquiao always seemed to be in cruise control during his fights. Roach would give Pacquiao instructions in the corner, but he was generally fighting the same way all the time. If Buboy takes over as Pacquiao’s trainer, he’ll be just fine, as long as he doesn’t get thrown in with a badly match-up for him like Crawford.