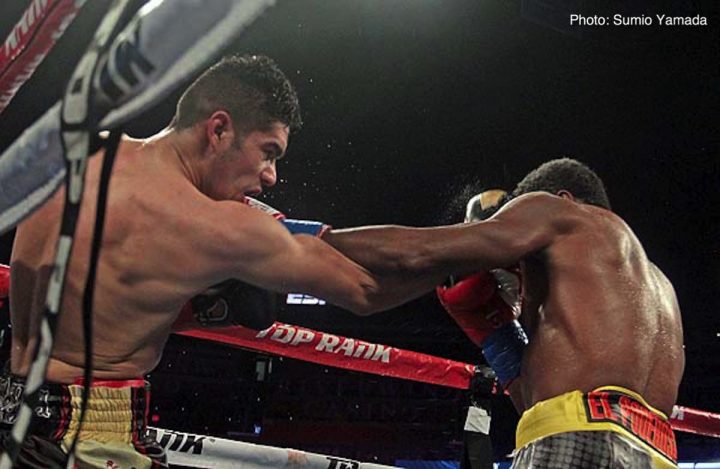 After the scores were announced, the crowd booed loudly, letting Ramirez and the judges know what they thought of them. The scoring was just awful. Ramirez didn’t win the fight by 12 rounds to 0 or 11 rounds to 1. The judges were way off with their ridiculous scoring of the fight, and they did Ramirez no favor by scoring it the way they did.

Ramirez’s accuracy wasn’t there tonight, as he missed Angulo frequently with his punches and was countered all night long.

Ramirez has really regressed as a fighter in his last few fights. He’s not the guy that he was four years ago. He’s gone downhill in the last year. Ramirez looks worse with each fight. Ramirez’s performance tonight might be a reason why his promoters at Top Rank haven’t matched him against better opposition. Ramirez doesn’t look good enough to beat anyone with talent in the division.

The fight should have been scored a lot closer than the lopsided scores handed in by the three judges, who made themselves look bad with the way they scored it. The only reason Ramirez won the fight is because Angulo was incapable of throwing more than a handful of punches each round. He looked like he wasn’t in good enough shape to let his hands go to win rounds. When Angulo did throw punches, he was hurting Ramirez. Angulo had Ramirez stunned in the first two rounds of the fight. If he’d gone for broke, he probably could have knocked Ramirez out because he was there to be stopped if Angulo could throw enough shots to get the job done.

Ramirez clearly won the fight, but gave away at least four rounds by getting rocked repeatedly in the first three rounds, and then getting hurt once again in the 7th. The fight was promoted by Top Rank Boxing on ESPN. The victory for the 27-year-old Ramirez was his fourth successful title defense of his World Boxing Organization 168 lb. title that h won in 2016. However, the fight showed that Ramirez isn’t ready to take on the other champions in the super middleweight division as of yet. Ramirez said before the fight that he wanted to unify the division against the best fighters after he beats the 34-year-old Angulo, which he did. But with the way Ramirez fought tonight, he needs to stay far, far away from the top fighters in the division if he knows what’s good for him.

The victory for Ramirez proved that he’s NOT in the elite class of the super middleweight division. Ramirez is not even in the class of the top contenders like Callum Smith, Chris Eubank Jr. and Jose Uzcategu. I would pick all three of those guys over Ramirez. WBC champion David Benavidez and WBA champion George Groves both beat Ramirez. Ramirez is still the WBO champion after outworking Angulo, but he never showed the kind of talent that he needed to for him to show that he’s one of the best at super middleweight.

“He come in very hungry to come for my belt,” Ramirez said of Angulo after the fight. ”Right now, I want a unification fight. James DeGale, David Benavidez, George Groves — I want those fights.”

I don’t think it would be a good idea for Ramirez to fight Groves or Benavidez. Those guys would beat Ramirez badly. Ramirez would likely beat James DeGale because he’s looking totally shot right now. Groves and Benavidez would be bad news for Ramirez. They might want to face him after what they saw tonight.

“No, I’m not happy. I tried to do better,” Ramirez said. “I want to go back to training again with my team and we’re going to talk about this fight and keep working, working because I want to be pound-for-pound fighter.”

It would be good for Ramirez to spend some more time fighting the stiffs that his promoters at Top rank keep matching him against. I can see why Top Rank is matching Ramirez against the type of opposition that they’ve been feeding him. He can’t be trusted against a decent level contender or champion because he’ll likely lose.

Well, I don’t see Ramirez ever becoming a pound for pound fighter. His problems that he showed in the fight against Angulo look like issues that will always be there for him. After all these years, the 6’2 ½” Ramirez still fights with his head hanging down in front of him, making it super easy to hit him with shots. Ramirez still gives up his height too easy by fighting on the inside rather than using his height and reach to dominate his shorter foes from the outside.

Ramirez struggled when Angulo was going on the attack and nailing him with shots. Ramirez looked beatable when Angulo put any kind of pressure on him in the fight.