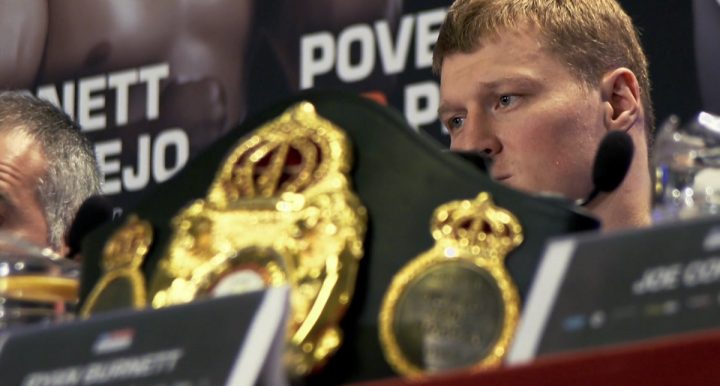 By Scott Gilfoid: WBC heavyweight champion Deontay Wilder tried his best to get the unification fight against IBF/WBA/WBO champion Anthony Joshua but in the end, the British fighter and his promoter Eddie Hearn preferred to go in the path of safety by choosing to face WBA mandatory Alexander Povetkin (34-1, 24 KOs) next.

It’s believed that Hearn never even tried to get the World Boxing Association to put off Joshua’s mandatory defense against Povetkin because he never wanted to make the Joshua-Wilder fight for 2018. That’s what Wilder’s manager Shelly Finkel believes. Instead, Hearn is expected to make the Joshua vs. Povetkin fight for September 22 on DAZN.

Hearn hasn’t signed any notable American fighters, so it’s important that he have something to televise on DAZN. Joshua vs. Povetkin isn’t going to interest the casual U.S boxing fans. Casual fans aren’t going to subscribe to DAZN in the States just to see Joshua beat up on the nearly 40-year-old Povetkin. That’s a terrible fight. Povetkin has done nothing to deserve a title shot against Joshua. The WBA is making it too easy for flawed fighters to get title shots without beating anyone of note.

Wilder is so upset with the way his emotions were toyed with by Matchroom Boxing promoter Hearn that he now wants Povetkin to knockout Joshua. Wilder no longer cares whether Joshua loses to Povetkin. Wilder wants him to lose. However, if Joshua lucks out with another referee working his fight that prevents inside fighting, it’s going to be tough for Povetkin to win. Joshua’s last opponent WBO heavyweight champion Joseph Parker never had a chance because the referee prevented him from fighting on the inside. Povetkin’s management are going to need to thoroughly vet the referee that is picked out for the Joshua fight to make sure they don’t get stuck with a similar referee that worked the Joshua-Parker fight.

Wilder is making it clear that Joshua and Hearn are going to have REAL problems when they restart negotiations with him next year. Wilder is no longer willing to accept the small money like he did this time. If Hearn was smart, he would have done everything in his power to make the Joshua-Wilder fight for September or October, because it was the best time for him to make the fight because Deontay had already agreed to the flat fee of $15 million. But by angering Wilder, they’ve woken a sleeping giant and he’s now angry and no longer willing to come in low like he did this time. For Hearn to get the Joshua vs. Wilder fight put together for April 13, he’s going to need to come up with the 50% that Deontay wants.

Wilder needs to stick to his guns if he’s not going to accept anything less than a 50-50 deal for the Joshua fight, because you can bet next April that Hearn is going to insist on getting Deontay and his management to agree to the same $15 million flat fee that they were offering him for the fight in 2018, which never had a date or a venue. That was the biggest hint that Hearn was never serious about wanting to make the Joshua vs. Wilder fight in 2018. When a promoter doesn’t give a date or a venue, it shows you that they’re not serious about wanting to make a fight.

If the Joshua-Povetkin fight had taken place a couple of years ago, Povetkin would have had a decent chance of stopping Joshua, but not now. Povetkin has looked beatable against David Price, Christian

Hammer and Andriy Rudenko. Povetkin is starting to fight like an older guy. Price hurt Povetkin with a big left hook in round 3 that led to the referee counting it as a knockdown.

”By not fighting me, and people seeing that I really want it, it hurt them but it helps me out,” Wilder said about Joshua and Hearn. “When people see you trying, that’s all that matters. I can only do what I can do. I can’t make a guy get in the ring. It’s a curse being so good because although you’re at the top you still don’t get no opportunities,” Wilder said.

The only people that are seeing that Joshua isn’t fighting Wilder are the hardcore boxing fans, and many of them already know that AJ and Hearn don’t want the fight. However, a lot of Joshua’s boxing fans believe that it’s Wilder’s fault that the fight didn’t get made. They think Wilder dodged the fight because he didn’t agree to the $15 million flat fee. They think Wilder doesn’t deserve anything more than a flat fee, even if it means that Joshua gets absurd amount of money in comparison. The $15 million that Wilder is said to have agreed with for the Joshua fight could potentially come out to him only getting 15 percent to Joshua’s 85% split if the fight brings in $100 million. For Hearn to get Wilder to agree to just a $15 million flat fee is baffling, because it seems so uncharacteristic for Deontay to agree to such an unfair offer.

If Hearn needs to keep sticking Joshua’s fights on DAZN due to him not being able to sign American fighters, then we’re probably going to continue to see AJ facing contenders and not Wilder. If Joshua gets past Povetkin, he can face the likes of Dillian Whyte and Jarrell ‘Big Baby’ Miller on DAZN. Those aren’t big fights either. Joshua already beat Whyte, so that’s a retread fight that does nothing for the boxing fans. Miller doesn’t have a fan base yet. That’s not a fight that will interest fans in the States. The only fight that the American fans want to see with Joshua is against Wilder, and that’s not going to happen if Hearn plans on giving Wilder flat fee offers.