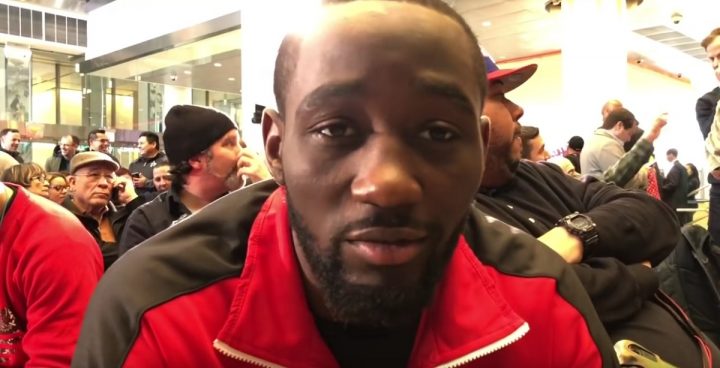 By Chris Williams: In a little over two weeks from now, WBO welterweight champion Jeff Horn vs. Terence Crawford will be battling it out on June 9 at the MGM Grand in Las Vegas, Nevada. The fight card will be televised on ESPN+.

The undercard is not well stocked with talent unfortunately. It kind of reminds me of the undercard for the Floyd Mayweather Jr. vs. Manny Pacquiao fight in 2015. That was a fight that made tons of money, but the undercard looked like it was an afterthought and not really important.
For the Crawford vs. Horn undercard, we’ve got the following fights:

• Jose ‘Sniper’ Pedraza vs. Antonio Moran – Former IBF super featherweight champion Pedraza (23-1, 12 KOs) will be taking on a tough opponent in #4 WBO lightweight Antonio Mora (23-2, 16 KOs) in a 10 round fight. Pedraza, 29, is still trying to come back from his 7th round knockout loss to Gervonta ‘Tank’ Davis in January 2017. Pedraza took 14 months off after the loss and came back last March in beating journeyman Jose Luis Rodriguez by an 8 round unanimous decision. Pedraza has a long, long ways to before he can get another title shot unless Top Rank wants to have their fighter WBA lightweight champion Vasyl Lomachenko throw Pedraza a bone by giving him a title shot without him earning it. It would be one of those in house Top Rank jobs. I don’t think that would be a good use of Lomachenko’s career though. He’s better off facing top guys that will increase his popularity rather than wasting time helping the team by fighting other guys in his same promotional stable. Lomachenko is already fighting a Top Rank guy in his next fight in WBO champion Ray Beltran. It would be better of Pedraza earned a title shot by fighting his way to the top. Moran has won his last three fights after losing to journeyman Emanuel Lopez by an 8 round split decision in December 2016. Moran’s other loss came against Luis Jesus Vidales in losing a 10 round decision in December 2014. Moran recently beat Jose Guadalupe Rosales, Richard Zamora and Salvador Briseno. I’ve never heard of any of those guys, so it shows that Moran has been padding his record. Pedraza should win this fight, but I don’t know. He looked so bad in getting taken apart by Gervonta Davis last year. I can’t accurately any outcome with Pedraza after the way he was blasted out by Davis.

• Jose Benavidez vs. Frank Rojas – Welterweight Jose Benavidez (26-0, 17 KOs) will be fighting unbeaten Frank Rojas (22-0, 21 KOs) in a 10 round fight. Rojas has a flashy record, but his wins have come against poor opposition. The 26-year-old Benavidez is the older brother of WBC super middleweight champion David Benavidez, who Top Rank recently signed to a contract. Jose Benavidez has been a pro for eight years since 2010, but his career has been moved slowly since his controversial 12 round unanimous decision over Mauricio Herrera in December 2014. Benavidez lost that fight in the eyes of a lot of boxing fans as well as this writer. Since that performance, Benavidez has clearly been backed off from fighting good opposition and put in with Jorge Paez Jr., Sidney Siqueira, Francisco Santana, and Matthew Strode. Benavidez won all those fights. Benavidez can beat those types of guys, but I’m not sure compete with the top fighters. Top Rank is going to have to take the training wheels off and let Benavidez fight someone decent sooner or later. They can’t have him fight journeyman his entire career, can they? I don’t see Benavidez going anywhere, and I wouldn’t be surprised if that’s the same view Top Rank has about him. Why wouldn’t they have moved him up already?

• Shakur Stevenson vs. Aelio Mesquita – Unbeaten featherweight prospect Shakur Stevenson (6-0, 3 KOs) will be fighting an 8 round match against Aelio Mesquita (16-1, 14 KOs). Stevenson, 20, has shown zero power since coming out of the 2016 Olympics. I have strong doubts whether Stevenson is going to pan out in the pro ranks. He’s too weak, and he’s not blinding fast either. Stevenson is an Olympic silver medalist for the U.S, but it’s a different sport in the pro ranks compared to amateur boxing, which is more like fencing. Stevenson is too limited to be able to compete with guys like Gary Russell Jr., Leo Santa Cruz, Oscar Valdez and Abner Mares. Top Rank is going to have to figure out what to do with Stevenson if he fails to pan out. Do they waste 10 years on him feeding him poor opposition or do they see what they got with him and put him in against good opposition. Stevenson won a silver medal for the U.S in the 2016 Olympics. They don’t need to spoon feed Stevenson. If he’s got the talent to make it in the pros, he’ll show it. If not, then it might be best to cut their losses and move on.