Hearn hints at the possibility of establishing Matchroom Japan 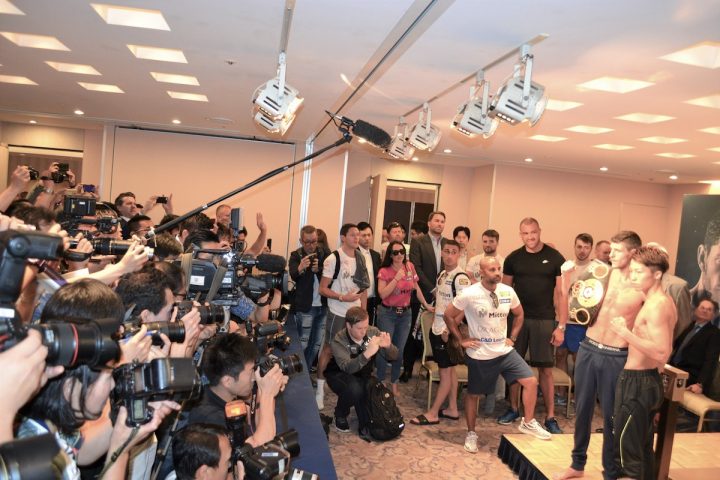 By Rishad Marquardt – May 24, 2018. Tokyo, Japan. Today was an exciting day for the boxing media in Japan. It was the day of the weigh-in for tomorrow’s bantamweight clash between WBA regular champion Jamie McDonnell of the United Kingdom and Naoya Inoue of Japan. First up, media were informed that the champion was running thirty minutes late. This ended up turning into an hour by which time most of the media had assumed that Jamie was not under the limit and was undergoing a last minute battle to shed however remaining grams were needed.

Inoue was so confident of his weight, that during the wait he came in to the weigh-in room, stepped on to the scales (which had been covered by his team so journalists couldn’t view how heavy he was), then walked out again. We were told he wanted to rehydrate to the limit, a clever strategic decision by the undefeated ‘monster’.Then, the stalling had come to an end and McDonnell entered the room. There was an immediate sense of tension in the air as he had, as suspected, undergone a last minute weight drain. He was red, sweating heavily, and looked drained. Naoya was first up and weighed in bang on the limit at 53.5 kilograms. Next was Jamie. He stepped up and much to the delight of his team and family, was under the limit weighing in at 53.3 kilo’s. He downed some much needed liquids and rushed back to his dressing room.

His promoter, Eddie Hearn, said Jamie was not going to give any media interviews until tomorrow, after the fight. Eddie himself however did speak to the Japanese media and politely answered their questions which for him were not of the sort that he would be used to in the west. ‘McDonnell was twenty minutes late at the contract signing yesterday, and over an hour late today. Does he feel apologetic towards Naoya?’ asked one Japanese journalist. Standing next to Hearn, I could almost hear him laugh inside, but ever the professional, he responded by saying that people in the UK are not as punctual as people in Japan. It was hard not to chuckle at the question and Hearn’s diplomatic response.

I had some one-on-one time with Eddie before the open media questions started. Seeing as he had recently done the mega-deal with Perform Group who operate DAZN, the sports streaming service that also operates in Japan – and has become huge here, I asked him if he was thinking about setting up a Matchroom in Japan. ‘Possibly’ was the answer he gave and elaborated by saying that the new deal he made with Perform in the US would mean more boxing coming to users of the service here. Currently the service offers most of the European football leagues including the English Premier League, Formula 1, WWE, and much more. As boxing in Japan is going through a revival akin to – but not quite on the same scale as that of the UK, it would make sense for Matchroom to establish a subsidiary here. This is especially true when considering not just the growing popularity of the sport here, but the sheer number of world champions they produce.

Hearn didn’t say anything more on the likelihood of that happening but he will no doubt be having some interesting meetings on the topic during his stay in Tokyo. Running a business that is growing as fast as Matchroom is though is no easy feat and he will surely be weary of spreading himself to thin. But. The photo in this article illustrates why he will no doubt be having a good hard look at the Japanese market. The number of journalists covering tomorrows fight is significant. The Japanese boxing market is lucrative and Hearn will be the first to admit there’s nothing more he loves than a pound coin. He has recently shown he also likes Dollars and something tells me a few extra Yen in his pocket would also suit him just fine.

NEWS:   Josh Kelly signs with Wasserman, can they turn him into a star?