David Benavidez vs. Matt Korobov on July 28 on Showtime 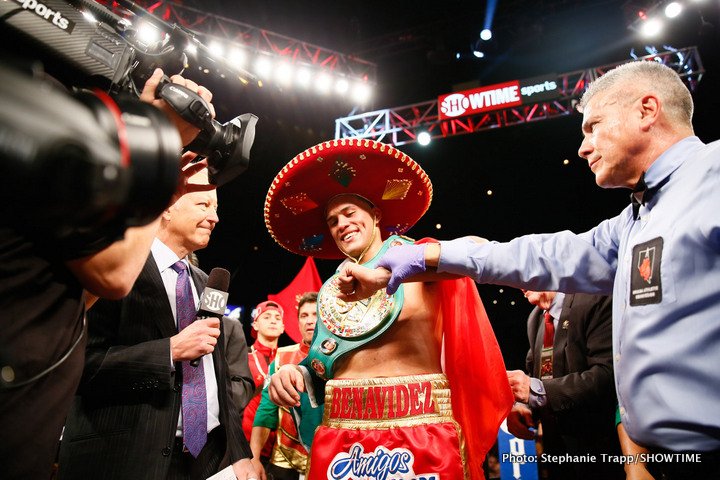 By Dan Ambrose: WBC super middleweight champion David Benavidez (20-0, 17 KOs) will be making his second defense of his title against 35-year-old 2008 Olympian Matt Korobov ( 28-1, 14 KOs) on July 28 on the undercard of lightweight unification fight between WBC champion Mikey Garcia and Robert Easter Jr. at the Staples Center in Los Angeles, California. The fight is being finalized, according to Dan Rafael.

Depending on what version of Korobov we see in this fight, it could be either a very tough fight for the 21-year-old Benavidez or an easy one. The Kovobov that dominated Jose Uzcategui in beating him by a one-sided 10 round unanimous decision in 2014 might have too much for the young Benavidez. That was four years ago, and Korovbov has not been that active since then, missing all of 2015 and 2017.

Korobov’s once promising career has stalled since losing to Andy Lee by a 6th round knockout in December 2014. Korobov and Lee fought for the vacant World Boxing Organization middleweight title. Korobov had a wide lead on two of the scorecards at the time of the knockout. Korobov got careless and was badly hurt by a right hook from Lee, who then finished him off with a series of hard blows. Since that fight, Korobov has fought just 4 times, beating Josue Obando, Brian Vera, Scott Sigmon and Jonathan Batista. Korobov’s win over Batista, a 6 round unanimous decision, took place last March. Korobov was inactive in 2015 and 2017.

Coming out of the 2008 Olympics, Korobov was moved very slowly by his management, having him fighting poor opposition the first five years of his career. It wasn’t until 2014 that Korobov was finally stepped up against quality opposition in being matched against Jose Uzcategui, and by that time he was already 31. For a fighter with Korobov’s long amateur background in Russia, he should have been put in with top tier opposition in his first year or his career instead of having him fight poor opposition for 5 years the way that promoters would bring along a green prospect that didn’t have an amateur career. That was 10 years ago, and boxing has changed a lot since Korobov turned pro. The promoters now realize that they don’t have to take Olympic athletes and feed them fodder for five years before moving them up. It’s just too bad that Korobov was moved that way because he probably would have been a world champion early in his career instead of finding himself in his mid-30s fighting above his ideal weight class at 168 against WBC champion Benavidez.

Korobov is ranked #15 with the World Boxing Council. He hasn’t done much to deserve that ranking with the level of opposition that he’s faced lately. With all the ring rust that Korobov has from him not fighting in 2015 and 2017, it might be a step too far for him to be facing Benavidez at super middleweight. Korovbov is not a natural super middleweight, although he did fight at light heavyweight in his last contest against journeyman Jonathan Batista (17-13, 10 KOs) last Mach and beat him by a 6 round unanimous decision. It’s unclear whether Korobov intentionally let the fight with Batista drag out the full 6 rounds to get the rust out of his system or he simply was unable to knock him out. Korobov should have been able to knockout Batista quickly if he has anything left, as the journeyman fighter from the Dominican Republic was knocked early in 5 of his previous 7 fights by Vitali Kopylenko, Levgen Khytrov, Radzhab Butaev, Willie Nelson and Kanat Islam. If Korobov tried to knockout Batista and failed, then he might be a shot fighter at this point.

Benavidez has been saying that he wants to fight the winner of the World Boxing Super Series tournament. Benavidez needs a big win right now to take his career to the next level. Korobov is not a big enough name any more to do anything for Benavidez. If this fight had taken place in 2014 before Korovbov lost to Lee and became an inactive fighter, then it would mean a lot more for Benavidez to be fighting him. But right now, Benavidez needs a bigger name than Korobov for him to increase his popularity. Benavidez’s strength and conditioning trainer Alex Ariza said last week that they wanted to be the substitute opponent for IBF/IBO/WBA/WBC middleweight champion Gennady Golovkin to face for his May 5 fight, but he went with junior middleweight Vanes Martirosyan instead. Ariza said that Benavidez would be a good option for Saul Canelo Alvarez to fight in September if he doesn’t face Golovkin in a rematch. Obviously, there’s no way that Golden Boy Promotions are going to use WBC super middleweight champion Benavidez as an opponent for Canelo Alvarez o fight on September 15, even though it would generate a lot of interest due to the fight date being on the Mexican Independence Day holiday. The 6’1 1/2” Benavidez is just too big for the 5’9” Canelo, and he throws too many punches. Canelo isn’t capable of throwing a lot of shots because he needs to take 2 minutes of rest breaks each round due to his poor stamina.

In other boxing news, #8 WBC welterweight contender Yordenis Ugas (21-3, 10 KOs) is a possibility for the undercard of next month’s title fight between IBF welterweight champion Errol Spence Jr. (23-0, 20 KOs) and Carlos Ocampo (22-0, 13 KOs) on June 16 on Showtime Championship Boxing in Frisco, Texas. It’s unknown whether the 31-year-old Ugas’ fight will make it on the televised portion of the Spence vs. Ocampo card or not.

The 2008 Cuban Olympian Ugas has won his last six fights since 2016. Ugas was beaten in back to back fights by Emmanuel Robles and Amir Imam in 2014. It was a big surprise for Ugas to lose to the unheralded Robles (15-3-1, 5 KOs) by a 10 round split decision, because this is a guy that doesn’t have the same amateur pedigree as him. It’s possible that Ugas overlooked Robles, who has lost his last three fights to Abel Ramos, Kenneth Sims Jr. and Steve Clagget. Imam dominated Ugas just as easily as Robles did in beating him by an 8 round unanimous decision. Since then, Ugas has turned things around in beating Levan Ghvamichava, Nelson Lara, Thomas Dulorme and Ray Robinson.


« Oleksandr Gvozdyk claims WBC told him Adonis Stevenson is next by Aug.19