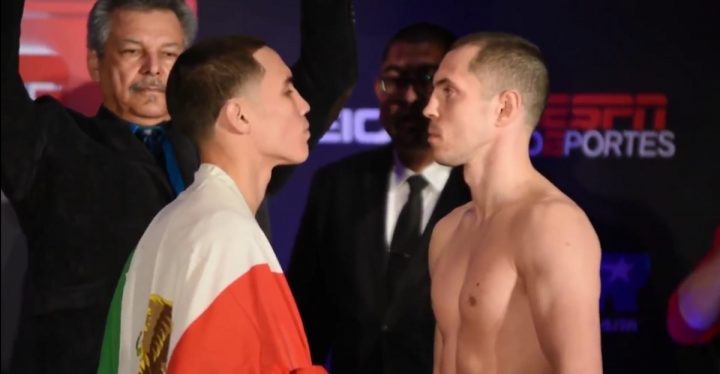 By Scott Gilfoid: Scott Quigg (34-1-2, 25 KOs) royally blew it in coming in 2.8 pounds over the featherweight limit at 128.8 lbs. for his fight against WBO World featherweight champion Oscar Valdez (23-0, 19 KOs) for their fight this Saturday night on March 10 on ESPN at the StubHub Center in Carson, California. As such, Quigg has NO chance to win the featherweight title.

If Quigg beats Valdez, the WBO 126 lb. belt will go vacant. It’s an all-around bad deal for the 31-year-old Quigg, who really needs to start thinking about moving up to super featherweight at 130 lbs. When it gets to the point where a fighter like Quigg is that far off the mark in making weight, he needs to start thinking about moving up in weight to either super featherweight or lightweight. For his part, the 27-year-old Valdez weighed in at 125.8 lbs.

Even if Quigg had wanted to lose the 2.8 lbs. of weight, the Commission wasn’t going to allow him to, as it’s too much weight for him to drop in the 2 hours they would have given him. Quigg had been trying to lose the weight since last night, but he couldn’t drop anymore. We’ll have to see how depleted he is from trying to drop weight when he gets inside the ring with Valdez tomorrow night.

You have to believe that Quigg put his body through a huge ordeal trying to get down to 126. If Quigg is drained tomorrow night, he’ll have no chance of beating Valdez. Heck, Quigg will likely lose the fight anyway, even were if he had made the weight with flying colors. Valdez is at top form and looking like a No.2 or No3 guy in the weight class. The only fighters that would give Valdez problems are the likes of Leo Santa Cruz, Abner Mares, Joseph Diaz and possibly Carl Frampton. I’m not sure about Frampton though. He’s starting to look a little shot to me.

Quigg will lose 20% of his purse for the fight due to him being overweight. Valdez will receive 10% of Quigg’s purse, which should make him happy. The California State Athletic Commission will receive the other 10% of Quigg’s purse. It’s bad news for Quigg. Losing only 20 percent of his purse may not be a big deal for Quigg If he gets the victory, then it’ll be worth it. Think about it. If Quigg uses his superior size to get the ‘W’ on Saturday, then Valdez will be steaming mad and will want an immediate rematch. You can best believe that there will be a huge weight penalty attacked to the contract for the rematch just in case Quigg gets any wise ideas to miss weight a second time. If Quigg can get a second fight with Valdez, he would get a second payday, and he would increase his popularity in both the UK and the States.

“Yesterday I was only 3lbs over. That’s normal, and it just wouldn’t budge. I have tried and tried. My body just seems to have frozen and won’t let go of any more weight,” Quigg said.

Someone on Team Quigg dropped the ball in letting him come in this far over the 126 lb. weight limit for the fight. You have to put the blame squarely on the shoulders of Quigg’s trainer Freddie Roach, who should have been on top of his weight to make sure he didn’t come in over the limit. If this wasn’t on purpose on Quigg’s part in coming overweight, it looks very unprofessional on his part.

There are some fighters that do miss weight on purpose so they can gain an advantage over their opponents. I don’t know if that’s what Quigg is thinking here. It’s not a good deal for Quigg to miss weight, because he loses 20 percent of his purse, and he won’t be able to capture the WBO featherweight title if he beats Valdez. Quigg lacks the popularity to just ignore belts the way some fighters do once they’ve become stars.

For Quigg to miss the weight by this much, it makes wonder whether he was just looking to win at all costs and not worried about the weight. Granted, if you’ve got a fighter that you know is going to lose, it’s sometimes worth it for them to miss the weight badly so they can get an edge over their opponent. It doesn’t hurt their career as bad when they win the fight Losing the fight is a much bigger deal than missing weight.

Quigg hasn’t lost a fight in 2 years since his close 12 round split decision defeat to Frampton. In the 2 years since, Quigg hasn’t fought dangerous opposition. He’s been winning, but he’s done against these fighters: Oleg Yevimovych, Viorel Simion and Jose Cayetano. Those aren’t great fighters.

Quigg helped Valdez out as a sparring partner last year in April in preparing him for his April 22 fight against Miguel Marriaga. Quigg then swapped out his trainer Joe Gallagher in favor of Freddie Roach, who trained him at his Wildcard Gym in Los Angles, California. Working as a sparring partner for Valdez had to have been a strange experience for Quigg, who was a world champion at 122 from 2013 to 2016.

Quigg is very familiar with Valdez and how he fights. Perhaps it’s possible that Quigg figured that he would need a weight advantage for him to beat Valdez. What better way to get an edge than to come in nearly 3 lbs. overweight at the weight-in? I’m just saying. Quigg could be big enough to beat Valdez if he didn’t put in much effort to lose the weight for the fight.

“If the fight goes something near the sparring sessions we had, then everybody can expect fireworks because we went at it,” Valdez said via ESPN.com.

If Valdez does stand and fight Quigg, we could see fireworks in this fight, but I’m not too sure that’s what we’re going to see. Valdez was using a lot of movement in his last fight against Genesis Servania on September 22, and we may see the same thing from the Mexican star on Saturday. I fully expect Valdez to at least try and stand his ground and fight Quigg initially. But if doesn’t like dealing with the punching power of Quigg, then Valdez will likely start using movement to box his way to a victory. It might be a boring fight in that case, but at least Valdez will have a chance of winning. 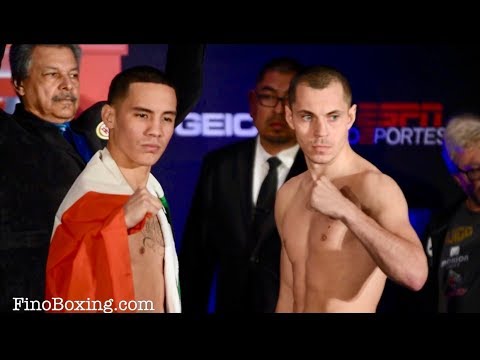 
« Pacquiao vs. Matthysse fight still not completed for June 24