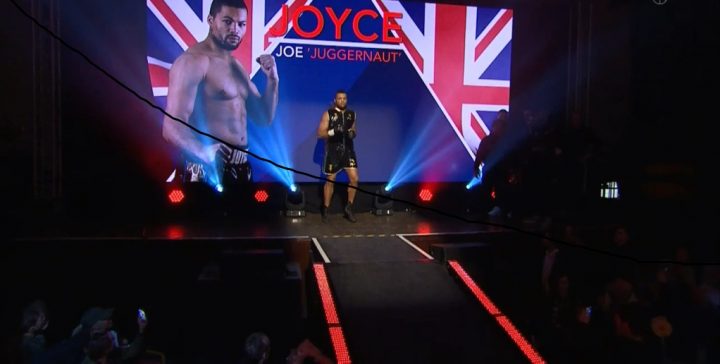 By Scott Gilfoid: 2016 Olympic super heavyweight silver medalist Joe Joyce posted a video on his social media site on Friday, attempting to lure former heavyweight world title challenger Dereck Chisora into agreeing to a fight against him on May 5th on the undercard of the Tony Bellew vs. David Haye 2 rematch at the O2 Arena in London, England.

The unbeaten Joyce (3-0, 3 KOs) asks the boxing fans “what happened to tough guy Dereck Chisora? I thought he took dangerous fights?” Joyce is saying that Chisora is running scared of fighting him.

Chisora isn’t even talking to the media in response to Joyce calling him out. That looks really bad.
Joyce’s promoter David Haye has been trying to get Chisora to agree to take the fight against Joyce but with no luck.

The money offered to Chisora to take the fight isn’t enough at this point for him to agree to it. Unless a bigger offer is made, it’s not likely that Chisora will agree to the fight.

A loss for Chisora against Joyce would likely spell the end of his career. Chisora has a pro since 2007, and he’s done well when matched against the right opponents. However, lately things have been falling apart for Chisora with him losing three fights out of his last five contests to Agil Kabayel, Kubrat Pulev and Dillian Whyte.

It doesn’t matter that Chisora could have won the fight with Whyte under the right circumstances and he could beaten Kabayel if he’d put in a little more effort, the fact is he lost those fights. At this point, Chisora can’t absorb another loss on his record if he wants to remain a guy that is in demand in the heavyweight division. Joyce is too much of a threat for Chisora unfortunately. It wasn’t as quite a huge blow to Chisora’s boxing career for him to lose to top contenders like Pulev and Whyte, because those guys are ranked highly in the heavyweight division. The 32-year-old Joyce is a guy that is just starting out.

Losing badly to Joyce would show that Chisora isn’t even at his starter level, and it would make him look like a journeyman in the eyes of a lot of boxing fans, which you can argue that he already is. The World Boxing Council still has Chisora ranked in their top 15 at No.14, but that ranking is very generous on their part. When you have a heavyweight that has lost 3 out of his last 5 fights in the last 2 years, it’s hard to justify ranking him in the top 15. Chisora should probably be a 2nd tier heavyweight at this point. One more loss will drive Chisora out of the top 15, and send him skittering into journeyman land. Joyce has only had 3 fights as a pro. Chisora could never live that down if he lost to him or heavyweight prospect Daniel Dubois. Chisora obviously wants to get a title shot, but unless he starts beating contenders, he’s probably not going to get that shot. Just fighting journeyman isn’t going to do the job.

The 34-year-old Chisora doesn’t appear to want any part of fighting the 6’6” Joyce for some reason. Chisora is fighting this Saturday night against little known French fighter Zakaria Azzouzi (14-2-2, 10 KOs) in a scheduled 8 round fight on the undercard of the heavyweight fight between contenders Dillian ‘The Body Snatcher’ Whyte and Lucas ‘Big Daddy’ Browne at the O2 Arena in London, England. The 32-year-old Azzouzi has past losses against Faisal Ibnel Arrami and Rachiel El Hadak. This is a lower level opponent for Chisora to keep busy and to get back on the winning track following his surprising 12 round majority decision loss to Agit Kabayel last November in Monte Carlo.

Unless Haye comes up with a bigger offer to make Chisora agree to the Joyce fight, we’re likely going to see him matched against two or three journeyman level opponents in his coming fights, and then he’ll probably look to fight for the European heavyweight title once again. If Chisora can win those fights, he’ll get pushed up the heavyweight rankings, and perhaps he’ll get lucky with Matchroom Boxing promoter Eddie Hearn electing to match him against Anthony Joshua for an undeserved heavyweight title shot. To bring in the huge pay-per-view buys on Sky Box Office, Hearn needs to match Joshua against heavyweights that the British boxing public recognizes. Chisora may be a faded heavyweight that has seen better days in his rearview mirror, but the casual boxing fans in the UK know who he is, and they’ll likely be more than happy to pay to see Joshua fight him. It’ll be a terrible fight when/if Joshua eventually faces Chisora, but it would likely be equally horrible if a big heavyweight like Joyce fought him as well.

Joyce’s promoters can do better than Chisora. They don’t need Chisora to move him up the heavyweight ranks. Chisora is looking too much like an over-the-hill fighter right now for Joyce to get anything out of fighting him. The time for Joyce to have fought Chisora is long past. If Joyce was a pro in 2016, a fight between him and Chisora would have been ideal, but not now with Delboy looking like a journeyman.

Joyce’s management should be trying to match him against these heavyweights rather than Chisora:

Joyce is ready to start taking on top contenders at this point. Chisora is yesterday’s news. There’s no gain in Joyce fighting him at this point. He would be just looking to beat a guy that was recently beaten by the unheralded 25-year-old Agit Kabayel last November.

Big Shout to @Eyez_uk for putting that "Big Juggernaut" track together. Gets me hyped! What happened to tough guy @dellboychisora ? I Thought he took dangerous fights!
He rejected Euro title money to fight me! Boxing fans shouldn't let him off so easy. Might as well retire. pic.twitter.com/QEVoHIw0d3