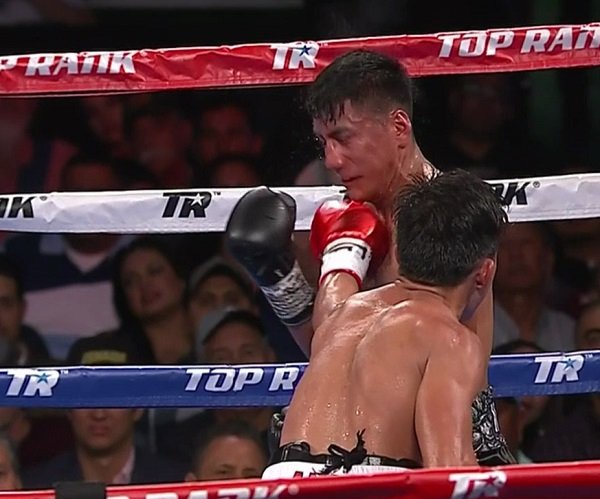 By Chris Williams: IBF World super flyweight champion Jerwin “Pretty Boy” Ancajas (29-1-1, 20 KOs) blasted out the hopelessly over-matched Israel Gonzalez (21-2, 8 KOs) in a 10th round knockout on Saturday night in the co-feature bout on the Gilberto ‘Zurdo’ Ramirez vs. Habib Ahmed card on ESPN at the American Bank Center in Corpus Christi, Texas.

Showing off wicked punching power with his left hand, the southpaw 26-year-old Ancajas knocked Gonzalez down in rounds 1, and 2 more times in round 10. The time of the stoppage was at 1:50 of round 10. The knockout was Ancajas’ 4th straight. The last fighter to go the full 12 round distance with Ancajas was McJoe Arroyo in September 2015. Only 1 fighter has gone the distance with Ancajas in the last 6 years, and that’s Arroyo.

From the 1st round it was obvious this was not going to be a competitive fight. Moments into the contest, Ancajas flattened Gonzalez with a telegraphed left to the head that put him down hard on the canvas. There was nothing spectacular about the shot. It was just a simple left hand thrown by Ancajas that Gonzalez was unable to block or get out of the way of. Gonzalez tried to get to Ancajas, but he was hit continually with right jabs to the face. Gonzalez did have success with landing body shots when Ancajas would get close enough for him to swing away. Bu as the fight progressed, Ancajas got better at avoiding the body shots from Gonzalez.

Gonzalez fought well in the 5th round, charging Ancajas and hitting him hard with head shots and punches to the body. Ancajas briefly seemed to lose his composure. There was a clash of heads during the round, but neither fighter was cut.

The fight had turned entirely one-sided by the 6th round. Ancajas was starting to land his big left hands with regularity. At the same time Gonzalez had the look of a defeated fighter who needed to be pulled out of the contest soon. Ancajas wasn’t throwing a lot of shots, but the punches that he did throw were hard left hands that were connecting well. Gonzalez wasn’t able to get out of the way of the shots, and his face was starting to swell and redden. Gonzalez’s defense was not up to par for him to defend against a fighter like Ancajas. Gonzalez didn’t belong inside the ring with a fighter of Ancajas’ class.

There are some fighters in the 115 lb. division that would have been a real problem for Ancajas, but Top Rank isn’t matching the Filipino fighter against any of them for some reason. I’m talking about Srisaket Sor Rungvisai, Carlos Cuadras, Roman ‘Chocolatito’ Gonzalez and Juan Francisco Estrada. Ancajas doesn’t look like he’s ready for any of those fighters at this point in his career, and I’m not sure that he ever will. Those guys are more polished with far better experience and boxing skills. Ancajas is a simple fighter that throws a lot of single overhand lefts and body shots. The above mentioned fighters are far more complex with their offense, and with they fight. I’m afraid that Ancajas would be totally over-matched against any of them. You can argue that might be the major reason why Ancajas’ promoter Bob Arum isn’t putting him in the SuperFly fights to compete against those talents. When you’ve got easy to beat fringe contenders like Israel Gonzalez available for guaranteed wins, why take a chance of getting beaten by talents like Rungvisai, Cuadras, Chocolatito and Estrada. The problem is, Ancajas isn’t young enough to wait out most of those guys, and he doesn’t appear to be getting better. He seems to be the same fighter he was in 2014. Ancajas lacks the speed of hand to dominate at the high level that we saw with Pacquiao during the early part of his boxing career. Ancajas is kind of slow.

In round 10, Gonzalez came forward with a low guard looking to land. However, Ancajas took advantage of him having his hands down by drilling him with a straight left to the head that sent him backwards. Ancajas then added a little push to help Gonzalez fall down. You can argue that the knockdown shouldn’t have counted due to the push that Ancajas gave Gonzalez to help him fall. I’m not sure why Ancajas felt he needed to push Gonzalez to help him fall. That’s not something you would have ever seen from Pacquiao. He wasn’t the type to shove his opponents to help them fall after he hit them. Pacquiao would hit them cleanly and let them fall on their own. If they didn’t fall, Pacquiao would keep hitting them until they did collapse. After Gonzalez hit the deck, the referee Rafael Ramos stopped the fight. The fight was stopped at 1:50 of round 10.

This was Ancajas’ first fight with Top Rank after signing a multi-fight deal recently. It’s a co-promotional deal. Top Rank is going to try and turn Ancajas into a star like Pacquiao in the U.S. Hopefully, they match Ancajas against better opposition than Israel Gonzalez, because I’m not sure that it’s possible to turn a fighter into a star if they’re just going to be matched against poor opponents. The fights that get the most attention are ones with 2 good fighters matched against each other. The boxing fans aren’t clueless. They know when they’re seeing a mismatch, which this fight clearly was. Ancajas is nothing like Pacquiao. Some boxing fans want to compare him to Pacquiao, but the only things they have in common is they’re southpaws and they come from the Philippines. Even now at 39, Pacquiao is much faster, and better skilled. He’s also able to use both hands well in comparison to Ancajas, who is totally reliant on using his left hand for all his power punches.

”I’m not too worried about the comparison’s to Manny Pacquiao,” Ancajas said to ESPN.com. ”But if I can achieve a little bit of success that he has achieved I will be very happy.”

It’s pretty obvious that Ancajas is never going to win 8 division world titles like Pacquiao. Ancajas will be lucky if he wins 2 division world titles. I can’t see Ancajas moving up to bantamweight and beating any of the current champions in that weight class. Those guys are too big for him, and they have a lot more hand speed and power in both hands. Top Rank boss Bob Arum needs to keep Ancajas at super flyweight at 115 and do his best to try and turn him into a star in that weight class. I’m not sure that it’s going to work, because the boxing public traditionally has not been excited at seeing fighters from the lower weight classes. Pacquiao didn’t become a star until he moved up to welterweight and started beating the bigger fighters like Oscar De La Hoya and Miguel Cotto. Pacquiao took risks with his career and it paid off well for him. I can’t see Ancajas moving up to welterweight. I think that would be a disaster because he lacks the size and most importantly the hand speed for him to be successful in that weight class.

The final punch stats were absolutely lopsided in the favor of Ancajas, which isn’t surprising given that Gonzalez is a fringe contender and he wasn’t supposed to be competitive in this fight. It was a pure showcase opponent. Ancajas connected on 130 of 477 shots for a connect rate of 27 percent. In contrast, Gonzalez landed 48 of 303 shots for a connect percentage of just 16 according to CompuBox. The fight was supposed to be a mismatch and that’s exactly what it turned out to be.

Ancajas was not nearly as impressive in this fight compared to in his previous fight against Jaime Conlan last November. In that fight, Ancajas attacked Conlan’s midsection and knocked him down 4 times in the fight before the bout was finally halted in round 6 after a knockdown. Ancajas was boxing too much with his jab and not going on the attack the way Pacquiao used to. It seems that Ancajas changed his fighting style for this fight by choosing to stay on the outside more and not looking to mi it up the way he’d done before in the past when facing opposition.

If Top Rank wants to turn Ancajas into the next Manny, then they’re going to need to match him up with a lot of fighters, preferably the good ones.

It was a miracle that Gonzalez even made it to the 10th, because he was just there taking punishment after the 5th round and not offering much up in return in terms of his offense.

In the first 4 rounds, Gonzalez was connecting with hard body shots when Ancajas would come forward looking to land his jabs and left hands. There was surprise on Ancajas’ face at times when Gonzalez would hit him with a particularly hard shot to the midsection, perhaps because he didn’t figure ahead of time that the unknown #9 IBF contender would put up such a good fight. Gonzalez obviously didn’t come in to Texas to just roll over for Ancajas, He came to try and win. However, Gonzalez seemed to lose his desire to win the fight after the 5t. That’s the punishment that Ancajas was dishing out started to become too much for Gonzalez to withstand. He was tiring from the hard shots to the head and body. They took something out of him.

Ancajas is seen as the next Manny Pacquiao to some. Top Rank recently signed Ancajas, and they’re hoping they can turn him into a star in the same way that they did with Pacquiao. Ancajas lacks the exciting style of attacking the way Pacquiao did. Ancajas doesn’t throw combinations like Pacquiao. Ancajas more of a single shot puncher, and he lacks the hand speed and all-out attacking style of the former 8 division world champion.

In other fights on the card, super middleweight contender Jesse Hart (23-1, 19 KOs) destroyed journeyman Thomas Awimbono (24-8-1, 20 KOs) in a fast 1st round knockout. Hart knocked Awimbono down 2 times in round 1. The fight was stopped after the second knockdown. The first knockdown came from a huge right uppercut to the head that dropped Awimbono down hard on the canvas. Moments later, Hart knocked Awimbono down for the second and final time with a combination to the head. The time of the stoppage was at 1:28 of round 1. The 28-year-old Hart had lost his previous fight to Gilberto Ramirez by a close 12 round unanimous decision on September 22 last year. Hart hurt Ramirez with some of his big uppercuts. Hart and Ramirez are both signed with Top Rank. We could see them both back inside the ring together soon, as Hart is rated #1 with the World Boxing Organization, which means he’s now in the position to challenge Ramirez for his WBO title once again. I don’t know if Top Rank will want to make that fight though, because Hart landed a lot of hard shots to the head of Ramirez. If Top Ranks to make a star out of the Mexican fighter, they’re going to have to limit the amount of punishment he takes. Hart was hitting Ramirez repeatedly with his big uppercuts. Ramirez took the shots, but he was getting exposed by Hart.