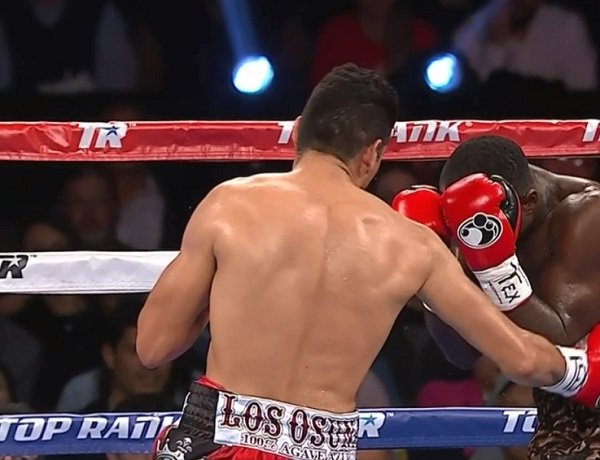 Ramirez suffered a cut over his left eye in round 3 from a clash of heads.

Despite getting a stoppage win, this was one of Ramirez’s poorer fights recent years. It was bad to watch because was matched against runner, who didn’t want to stand and fight in Ahmed. Ramirez’s promoters at Top Rank need to do a better job of vetting his opponents in the future to ensure that they’re getting a quality fighter that will make it an interesting fight for the boxing public. Judging by the overwhelmingly negative comments from fans on social media tonight about Ramirez’s terrible mismatch against Ahmed, it appears that his promoters at Top Rank made a mistake in selecting Ahmed as his opponent instead of someone good that would be willing to fight and make it interesting.

Ahmed did an excellent job of making the lanky Ramirez miss with a lot of his power shots with his head movement and quick feet. However, Ahmed couldn’t get out of the way of Ramirez’s body shots when he would trap against the ropes. I think that proved to be his undoing in the fight, as Ramirez landed some hard body shots in rounds 5 and that took a lot of the energy out of Ahmed’s game.

Ahmed tried to stand his ground at times in the first 3 rounds, but he didn’t have the size or the power to stand up to the much taller 6’2 1/2” Zurdo Ramirez. Ahmed looked about the same height as welterweight champion Keith Thurman, and almost same weight. He looked very light for the 168 lb. division. Ramirez appeared to be in 180s after rehydrating. He looked huge. Ramirez reminded me a lot of former Top Rank fighter Julio Cesar Chavez Jr. with the way he fights and how he used to be huge for his weight class at middleweight. Chavez Jr’s size is what made him successful a middleweight. Once Chavez Jr. could no longer make 160, he had to move up to the super middleweight division where he’s been unable to make weight for the division. At 168, Chavez Jr. has a non-factor in that weight class. Ramirez may have the same problem once he’s forced to move up to 175.

The win for the 26-year-old Ramirez was his 3rd successful title defense of his WBO super middleweight title that he won 2 years ago in beating Arthur Abraham by a 12 round unanimous decision. In Ramirez’s 3 title defenses, he’s beaten Max Bursak, Jesse Hart and Habib Ahmed. Ramirez had a close call in defeating Hart in his previous fight on September 22 last year in winning a narrow 12 round unanimous decision by the scores 115-112, 114-113 and 115-112.

Ahmed did a good job of eluding Ramirez for the first 5 rounds with his clever footwork. However, in the 6th, Ramirez trapped Ahmed against the ropes and hurt him with hooks, uppercuts and body shots. Referee Lawrence Cole finally decided he’d seen enough and he stepped in and stopped the fight. The fight was stopped at 2:31 of round 6.

The fight arguably could have been stopped in the 2nd round once the much smaller 5’8” Ahmed began showing signs of being in distress, and not even trying to make a fight of it.

Ramirez doesn’t usually knock guys out, but tonight’s opponent was so horrible that he was able to do so with ease. Ahmed was too weak, too small and too limited in the talent department for him to make it the full 12 rounds.

The 6’2 ½” Ramirez used his size advantage to bludgeon the smaller 5’8” Ahmed in round of the fight. There are some short fighters that are powerful. Ahmed isn’t one of those guys. He was weak, short and small for division. It’s unclear why Ahmed fights at super middleweight, because he’s clearly a guy that could fight at 154 or 160 if he wanted to. He looked smaller than WBC junior middleweight champion Jermell Charlo and IBF 154lb. champion Jarrett Hurd.

Ramirez says he wants to go after the winner of the World Boxing Super Series [WBSS] once it concludes for the 168 lb. division. Ramirez seems confident that his promoter Bob Arum will be able to hook him up with whoever emerges as the winner of that tournament. That means Ramirez could soon be facing someone like Chris Eubank Jr., George Groves, Juergen Braehmer or Callum Smith. Those are the 4 remaining contestants in the WBSS tournament.

Ramirez’s promoters at Top Rank must have been thinking they would make him look good in matching him against a pitifully over-matched opponent in the Ghanaian Habib Ahmed, but in this case, I think it backfired on them because this was a terrible fight to watch. There’s a right way and a wrong way to match a fighter when you’re trying to turn them into a big star, and tonight we saw the wrong way of doing it. Top Rank needs to do a better job of matching Ramirez if they want to keep boxing fans tuning in to watch him fight. For me, I wouldn’t want to watch Ramirez fight ever again after tonight if I didn’t have to as part of my job. Mismatches like the Ramirez vs. Ahmed fight are off putting and a black eye for boxing. If Top Rank doesn’t have the confidence to match Ramirez against good fighters, then they should forget about trying to turn him into a star, because he’s not going to ever become a star fighting the likes of Ahmed and Max Bursak. The boxing fans at ringside at the Bank of America Center tonight were totally quiet, which is a bad sign, because you don’t hear cheering from the fans that are sitting at ringside, it suggests that they’re not interested in the fight. If the fans at ringside don’t like what they’re seeing, you can bet the boxing public at home isn’t liking what they’re seeing either. Ramirez should be fighting much better fighters moving forward.