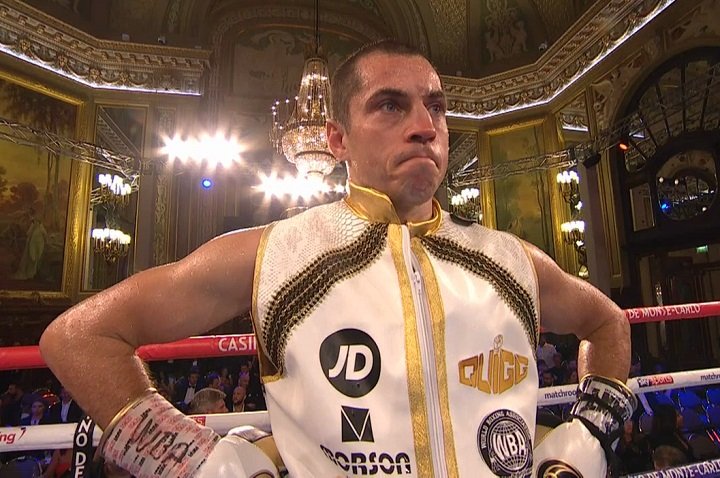 By Scott Gilfoid: Former super bantamweight champion Scott Quigg (34-1-2, 25 KOs) did the job against 36-year-old fringe contender Oleg Yefimovych (29-3-1, 16 KOs) in stopping him in the 6th round on Saturday night in their fight at the Casino e Monte Carlo Salle Medecin, in Monaco, Monte Carlo.

All in all, it was a good win for Quigg. He looked very good tonight. If he could fight like this every time out, he’ll be a world champion in no time at featherweight.

Quigg batered the aging Ukrainian Yefimovych with power shots until the referee Luis Pabon had no other choice but to step in and stop the one-sided contest. Yefimovych was hurt and absorbing too much punishment for the referee to allow Quigg to tee off the way he did.

Quigg, 29, hurt Yefimovych with hard right hands in round 1 and 2. The 3rd round was by far the best of the night for Yefimovych, as he landed some nice counter shots. It was a close round, but Quigg still did the far better work with his punching power advantage.

In rounds 4 and 5, Quigg hooked well to the head of Yefimovych. The head shots were brutal looking, but it was Quigg’s body shots that did the real damage. Yefimovych seemed to drain down like a battery from those punches. He couldn’t handle the body shots at all. Those were the kind of punches that seeped the energy out of Yefimovych.

By the 6th round, it was academic that the fight wasn’t going to last too much longer. Yefimovych was tired, and weak-looking from the big shots that he was absorbing from Quigg. Finally, the referee did the right thing and stepped in and halted the fight at the right time. If Yefimovych had been able to show him something, the referee would have let the fight continue, but it was too much of a one-sided beat down for the contest to be allowed to continue.

Quigg fought well without his trainer Freddie Roach, who couldn’t be at his side for this fight due to a prior commitment he has with a UFC fighter that he trains in the U.S. Quigg could have been out there by himself tonight, and still dominated Yefimovych. Quigg had too much power, and boxing skills for his over-matched opponent.

This was Quigg’s third straight victory since losing to to Carl Frampton last year by a 12 round split decision. Since then, Quigg has beaten Jose Cayetano, Viorel Simion and Yefimovych. Quigg needs to step it up though and prove that he can hang with some of the talented featherweights in the division. After all, Quigg wants to fight for a world title soon. It would be nice to see how Quigg handles being in the ring with someone like Joseph Diaz jr.