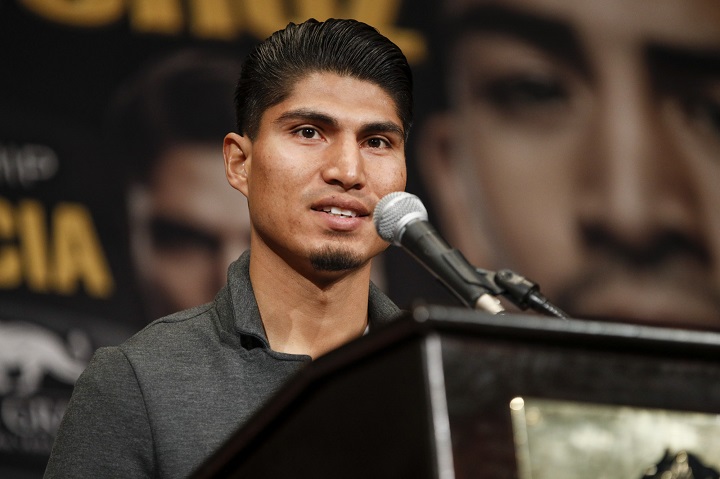 By Dan Ambrose: A fight between unbeaten Mikey Garcia (37-0, 30 KOs) and former WBC World lightweight champion Omar Figueroa Jr. (27-0-1, 19 KOs) is being talked about for January 27 in New York.

If this fight takes place at lightweight, it would give Mikey a big advantage, as Figueroa Jr. has outgrown the 135 lb. division and he’s now fighting at 147. It would be difficult for Figueroa Jr. to have to melt down to fight Garcia at 135 if that’s the only way he could get the fight with him.

WBC lightweight champion Garcia, 29, had an opportunity to face WBA lightweight champion Jorge Linares in a unification fight, but he turned it down. Golden Boy Promotions, the promoters for Linares, wanted to make that fight, but Mikey passed up on the fight. The offer will still likely be there for Mikey regardless of what happens in his next fight.

If Garcia-Figueroa gets made, it would likely take place I the 140 lb. division. The 27-year-old Figueroa Jr. is fighting at welterweight now, but it’s unlikely that Garcia would want to move up all the way from lightweight to 147 for this fight. Garcia did beat Adrien ‘The Problem’ Broner at 140 in his last fight on July 29 at the Barclays Center in Brooklyn, New York.

Going up another 7 pounds to 147 might be a bridge too far for Mikey, considering he didn’t look nearly as powerful at 140 as he had in fighting at featherweight, super featherweight and lightweight. The Broner fight showed clearly that Mikey’s power didn’t carry up to the 140 lb. division. Figueroa Jr. would have an advantage over Mikey if he could get him at 147, because his power is good for that weight class.

Figueroa Jr. previously held the WBC lightweight title from January 2014 to November 2014. Figueroa Jr. was given the WBC ‘Champion in Recess’ tag.

Figueroa Jr. is coming off of a 3rd round knockout win over former 2 division world champion Robert “The Ghost” Guerrero on July 15. Figueroa Jr. retired Guerrero, who looked completely shot. Figueroa caught Guerrero at the right time of his career to stop him. In that fight, Figueroa Jr. dropped Guerrero 3 times in the 2nd round and another 2 times in the 3rd.

Guerrero was fighting like he had lost his senses completely. Guerrero was trying to fight Figueroa Jr. on the inside, but he kept taking his eyes off of him and getting clobbered. In hindsight, Guerrero had never fought anyone with the same inside fighting skills as Figueroa Jr., and he was ill-prepared for his better technical skills in close. Guerrero came into the Figueroa Jr. fight having lost his 2 previous matches against David Emanuel Peralta and Danny Garcia. Figueroa Jr. caught Guerrero at the right time in his career to beat him.

The way that Mikey Garcia gassed out in the second half of his fight against Adrien Broner, he’s going to have problems being a major player at 140 and 147. Mikey can possibly win a world title at light welterweight now that Terence Crawford has moved up in weight, but he’s not going to be a star in that weight class. The bigger names are at 147. Mikey will be fighting in an empty division if he tries to reign at 140. The talented fighters already moved up to 147. If Mikey couldn’t shine against a depleted Broner at 140, then it doesn’t bode well for his chances to excel at 147.

Mikey likely will beat Figueroa Jr. if the fight takes place at 140, but at 147, it’ll be a different story. Figueroa Jr. might have too much size for Mikey in that weight class. I can’t see Mikey agreeing to face Figueroa Jr. at 147. It would be giving him too much of an edge, and that’s not been Mikey’s style.

If Mikey wants the bigger money fights, he’s going to need to move up to 147 sooner or later. The top guys aren’t going to boil down to 140 or 135 just so they can fight him. Mikey might as well move up to 147 to fight Figueroa Jr. I don’t think he will though. I see Mikey using his A-side pull to make Figueroa Jr. boil down to 140 the way he did with Broner. Mikey can probably beat a depleted Figueroa Jr. like he did with Broner, who looked thin and weight drained for their fight last July.