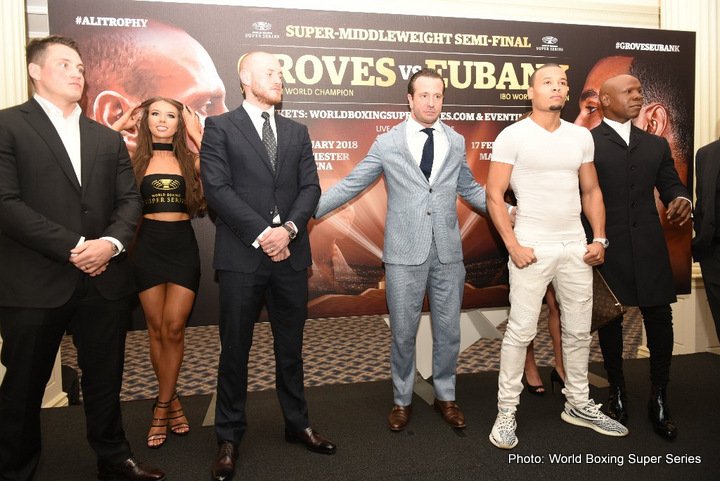 By Scott Gilfoid: James DeGale is pulling for George Groves to defeat Chris Eubank Jr. in their fight on February 17 in the semifinals of the World Boxing Super Series tournament at the Manchester Arena in Manchester, UK.

DeGale (23-1-1, 14 KOs) has selfish reasons for wanting Groves (27-3, 20 KOs) to beat Eubank Jr. DeGale wants to face Groves in a rematch in 2018. It would be a big unification fight btween DeGale and Groves if the two of them can win their next fights.

Groves beat DeGale 6 years ago by a narrow 12 round majority decision on May 21, 2011. Groves didn’t want to give DeGale a rematch at the time, saying that it would be better to wait down the road until a time when both guys were world champions. Groves captured the WBA World super middleweight title earlier this year in defeating Fedor Chudinov by a 6th round knockout on May 27.

DeGale won the IBF super middleweight title 2 years ago in beating Andre Dirrell by a close 12 round unanimous decision on May 23. DeGale almost lost his IBF title earlier this year in a unification fight with former WBC champion Badou Jack on January 14. The fight was ruled a 12 round draw; although a lot of boxing fans saw Jack winning the fight by 2 rounds.

”I’d like Groves to win because that sets up a huge fight between me and him at the end of next year,” said DeGale to skysports.com. “It’s a good competitive fight but I think Groves wins, because of his experience and he’s a massive super-middleweight.”

Groves, 29, is bigger than Eubank Jr., but that might not matter. Eubank Jr. was smaller than his last opponent Avni Yildirim, and he still stopped him in 3 rounds in their quarterfinals fight in the World Boxing Super Series on October 7. Granted, Yildirim looked awful, like a fighter that didn’t rate to be ranked in the top 15, let alone in the top 5 by the World Boxing Council, but Eubank Jr. still showed that he could stop a guy that is a lot bigger than himself. I don’t know if Eubank Jr. can do that against Groves though, because he can actually fight. Yildirim just looked like some guy that was picked out by WBC and given a high ranking for some reason known only to the WBC. Just looking at how poor Yildirim looked in that fight, I’m still trying to understand the WBC’s rationale for ranking that guy in their top 15. Yildirim looked more like a fighter that should be ranked bottom 100 rather than top 5. It obviously helped Eubank Jr., because he picked an easy mark to pad his record with and make himself look better than he actually is. I just don’t think it’s good for boxing to have sanctioning bodies ranking guys that don’t have the talent to thrive with the high rankings that are given to them.

Eubank Jr. is going to have to show that he can beat a guy that is not only bigger and stronger than him, but who has a lot more experience. Groves has fought Carl Froch, DeGale and Badou Jack. The only marginally good opponent Eubank Jr. has fought during his career is Billy Joe Saunders, and he lost to him. What does that tell you? It tells me that Eubank Jr. beats the domestic level fighters, but then loses when he’s stepped up against decent but far from great fighters. Saunders is more of a bottom 10 level guy at middleweight. Saunders is technically the WBO middleweight champion, but only because he beat Andy Lee. Saunders didn’t fight a good middleweight to win the WBO title. Eubank Jr. losing to Saunders shows where he’s at in terms of talent.

“I think we’ll see him winning the first six rounds fairly easily, I think Eubank will come into the fight but I think Groves wins it on points,” said DeGale.

I don’t agree with DeGale. If Groves wins, he’ll win by a knockout by landing a body shot that Eubank Jr. cannot deal with. This won’t be a decision win for Groves. I see this fight ending with a knockout either way. Groves has stamina and punch resistance problems. Eubank Jr. has never fought a truly goo fighter before during his career, and he’s never been hit to the body. Gary O’Sullivan had Eubank Jr. shook up early in their fight in 2015 after hitting him with a head shot. O’Sullivan then gassed out almost immediately, and Eubank Jr. was able to take over and stop him in the 7th. I’ve never seen a fighter gas out as quickly as I did with O’Sullivan. He was done after round 2.

DeGale has a title defense scheduled on December 9 against bottom #15 WBC Caleb Truax (28-3-2, 18 KOs) at the Copper Box Arena in London, UK. DeGale, 31, isn’t taking any chances of him getting beaten. Truax is the lowest ranked fighter DeGale could get in the International Boxing Federation’s top 15 contenders. Truax comes into the fight with DeGale having lost 2 out of his last 5 fights. He was blasted out last year by Anthony Dirrell in 1 round, and stopped in the 12th round the year before that by former WBA middleweight champion Daniel Jacobs.

It’s unclear why DeGale would want to fight someone that has been knocked out twice in the last 2 years like Truax. Personally, I would have a hard time agreeing to such a fight if I were a champion. I would tell my promoter to go back to the drawing board, because I wouldn’t want someone that is struggling as badly as Truax is right now. DeGale must feel that it’s a safe fight for him rather than taking on one of the other contenders that might beat him and end his 2-year reign as the IBF strap holder. This will be DeGale’s 4th title defense of his IBF title.

What’s interesting is DeGale is calling himself the No.1 fighter in the 168lb. division. I don’t agree with that at all. I see DeGale as being rated below these guys at 168: