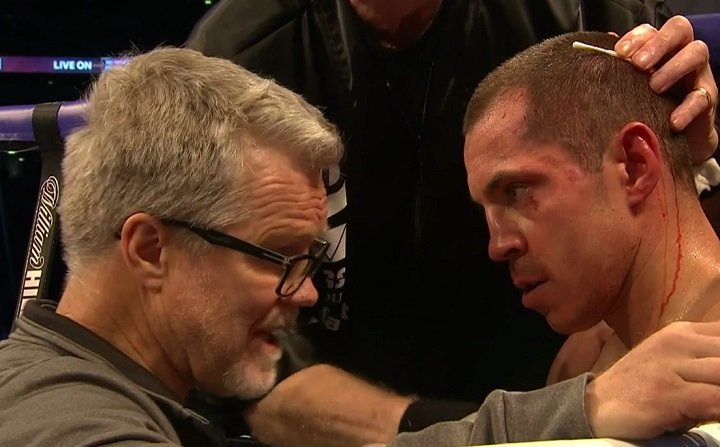 Quigg hurt Simion with a big right hand late in round 7. He had the Romanian Simion backing up and taking punishing head shots as the round ended.

The 35-year-old Simion started off fast in getting the better of Quigg in rounds 1 and 2 with his combination punching on the inside. It looked like Quigg wasn’t quite comfortable with the inside

Simion was landing more shots in the rounds, but he lacked the punching power to hurt Quigg. Indeed, Quigg was able to get the better of the action based on his harder punches that he was connecting with.

By round 8, Simion’s face was badly red and bruised from the heavy shots that Quigg was landing in the fight. Simion must have really wanted the victory because he took a lot of heavy shots in the fight. The punches that Quigg hit Simion with would have knocked out many of the top fighters in the featherweight division. You’ve got to give Simion a lot of credit for being able to take the punishment and keep fighting without him giving up or getting knocked out. Simion showed an excellent chin in this fight

Simion appeared to win rounds 1, 2 and 11. Quigg connected with the better shots in rounds 3 through 10. However Simion came alive in the 11th round to land a lot of shots on the inside with his shorter punches. Quigg took them well and answered back with some big punches of his own.

The victory for Quigg makes him the IBF mandatory challenger to IBF featherweight champion Lee Selby. That’s going to be a difficult fight for Quigg, because Selby has excellent boxing skills, good size, and he’s very hard to hit. The shots that Quigg was landing tonight against Simion will be very hard for him to connect with against a skilled boxer like Selby.

“It was a difficult fight,” said Quigg afterwards. “I was in control all the time. It was a comfortable win. Sometimes I should have used my angles. I stayed in the pocket a little too long. I agree with it,” said Quigg in agreeing with Lee Selby that the fight was “easy work.”

Quigg was bruised underneath both of his eyes from the many shots he was hit with by Simion. The bruising came from the high number of shots that Simion landed in the fight. He hit Quigg an awful lost. Quigg took the shots without ever showing signs of being hurt, but the accumulation of shots did a number on Quigg’s eyes.

“Scott is ready for the Lee Selby fight,” said Quigg’s promoter Eddie Hearn after the fight. “It’s a great fight for British boxing. Lee Selby vs. Scott Quigg, why not?

Quigg-Selby will be an excellent fight for British boxing. Quigg needs to buckle down with his defense because there’s little chance that he’ll beat Selby if he’s this easy to hit. Leo Santa Cruz and Abner Mares would also be a big problem for Quigg if he were to mix it up with them. Those guys throw a lot of punches, but with more power than Simion.

If they’re able to connect on as many shots as Simion did tonight, it’ll be difficult for Quigg to beat either of them. The good news is neither of those fights will happen anytime soon. Quigg is going to try and grab Selby’s IBF featherweight title. If he can get that belt, then he’ll look to fight a unification match after that.

Quigg has his work cut out for him if he wants to beat Selby, because the way he fought tonight I don’t know if he’s capable of passing that huge test. Selby looks very hard to beat right now with his boxing skills and airtight defense. Selby would have to be favored over Quigg based on tonight’s performance. Selby is too skilled, and he’s not going to get hit with Quigg’s big power shots. Quigg would need to not load up so much against Selby for him to have a chance of winning.

As for Simion, he’s going to need to go back to the drawing board and see what he can do with his career. It was a disappointing loss for him. He hadn’t been beaten since losing to Lee Selby by a 12 round decision in July 2013. Quigg did a better job of beating Simion than Selby did. However, Selby wasn’t hit as often as Quigg was in the fight. He was able to make Simion miss with a lot of his power shots in that fight.

The main difference between Quigg and Selby’s performances was the punching power that Quigg had. He was able to win a lot of rounds tonight against Simion simply by hitting him with the cleaner and harder shots. Simion landed more frequently, but he didn’t possess the pop in his punches to win the rounds. He tried though. It was a game performance from Simion.